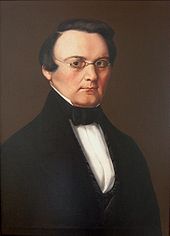 Wilhelm Matthias Naeff (born February 19, 1802 in Altstätten ; † January 21, 1881 in Muri bei Bern , legal resident in Altstätten) was a Swiss politician . After 18 years in the government of the canton of St. Gallen , he was elected to the Federal Council in 1848 as a representative of the liberal center (today's FDP ) and subsequently headed four different departments. His 27-year term in office is the fourth longest of all Federal Councilors. Nevertheless, he had comparatively little influence and was only Federal President once , in 1853.

Naeff was born into a long-established and traditional Rheintaler family. He was the third son of the politically influential textile wholesaler Johann Matthias Naeff and had eleven siblings. Ferdinand Adolf Naeff , one of his younger brothers, later became an important railway engineer.

After completing secondary schools in Aarau and Lausanne from 1815 , Wilhelm Matthias Naeff studied law at the Ruprecht-Karls-Universität in Heidelberg from 1819 , where he also received his doctorate four years later. After returning to Switzerland, he worked as a lawyer in Altstätten . In 1828, at the age of only 26, he was elected to the St. Gallen Grand Council , where he established himself as one of the leading liberals ; a total of eight times he served as Landammann .

Naeff headed a popular assembly in Flawil in 1836 , at which he called for a representative constitutional council for Switzerland. Otherwise, in contrast to his fellow campaigners, he took on a more mediating role between liberals and conservatives , who at the time were apparently irreconcilable. Although the Upper Rhine Valley tended to be conservative, he could rely on a loyal following. As a government councilor, he was involved in planning the regulation of the Rhine , which, however, could not be implemented until 1892. In road and rail construction, he made a significant contribution to the development of his canton. He was also involved in tariff negotiations with neighboring countries.

The Tagsatzung sent Naeff to the canton of Schwyz as federal commissioner in 1838 to mediate in the so-called "horn and claw dispute", a conflict between liberal small cattle and conservative large cattle owners. He held this task again from 1845 to 1847 in the canton of Lucerne , between the troop marches and the Sonderbund War . In 1844 and 1847 he represented his canton himself as envoy at the Diet. Although he advocated the dissolution of the Sonderbund , as a member of the constitutional commission he was careful to ensure that the first federal constitution of the federal state created in 1848 had a balancing character.

On September 30, 1848, the Great Council elected Naeff as one of the two St. Gallen representatives in the Council of States . However, an office he exercised a little more than six weeks long, because on 16 November 1848 he was supported by the Federal Assembly for the seventh member of the Federal Council selected. In the first ballot he received 72 of 128 votes cast (28 votes went to Jakob Robert Steiger and 28 others to various other people). His choice was a concession to the canton of St. Gallen, whose vote had been decisive for the violent dissolution of the Sonderbund. Naeff was the Federal Councilor with the most government experience and because of his moderate behavior, the conservatives also showed him a certain respect.

As head of the Post and Building Department , Naeff did important building work for the young federal state , especially in the modernization of the state infrastructure . One of his most important tasks was the standardization of the fragmented postal system under federal competence. He paid attention to the best possible regional development and favorable tariffs. The Bundespost , founded in 1849, issued the first postage stamps the following year . Naeff also concluded postal contracts with other countries. In his first year in office he was assisted by General Postal Director Benedikt La Roche . However, this resigned in July 1849 due to differences of opinion, whereupon the post remained vacant for three decades.

Another part of Naeff's responsibility was the establishment of a national telegraph network . At the end of 1852 it reached a length of 1,920 kilometers, connected all the larger towns in Switzerland and thus accelerated the country's industrialization . The creation of a national railway network was originally supposed to be a task for the state as well. Naeff envisaged that the federal and cantons should carry out the construction of the railway together, financed, among other things, by a federal loan. However, under the influence of Alfred Escher , the Federal Assembly decided in favor of complete privatization. The federal government was only granted a formal right of concession .

In 1853, Naeff was Federal President for one year and thus as head of the Political Department at the same time Foreign Minister. As a result, however, he lost significant influence and was never re-elected as Federal President. In 1854 he temporarily headed the trade and customs department before he took over the post and construction department again in 1855. In 1860 he was forced to hand over construction to the Department of the Interior due to overload and was only responsible for the post office for the next six years. From 1867 to 1873 he headed the trade and customs department again, and from 1873 the finance and customs department. Naeff acquired the reputation of being a chair glue and a pedantic boring man, he survived several confirmatory elections only with narrow majorities. He created political opponents in particular with his negative attitude towards the planned Gotthard Railway (the canton of St. Gallen always preferred a railway over the Splügen Pass ).

Since Naeff had lived in Bern for almost two decades , the support in his home country gradually waned. At that time it was customary for federal councilors to face a so-called compliment election , that is, they ran for national councilors in order to secure their legitimacy among the people. In the National Council elections in 1866 , he fell through in the constituency of St. Gallen-Nordost . The Federal Assembly then no longer confirmed him, but Naeff stayed in office because Joachim Heer , who was elected in his place , refused to accept the election. In 1869 and 1872 Naeff refrained from running for a National Council candidacy; nonetheless, the Federal Assembly re-elected him, albeit only barely.

Towards the end of his time as Federal Councilor, Naeff, who had always remained single, made a contribution to the development of the Universal Postal Union , which was founded in Bern in 1874 . After a total of 27 years, he finally resigned on December 31, 1875, as the last of the seven Federal Councilors from 1848. He then lived with one of his brothers in St. Gallen , then temporarily in Lucerne and from 1880 in Muri near Bern , where he is now felt much more at home than in the St. Gallen Rhine Valley. In December 1878 his great cousin Simeon Bavier was also elected to the Federal Council. After several strokes, Naeff died at the age of 78.

Head of the Federal Department for the Environment, Transport, Energy and Communication (DETEC)

Head of the Federal Department of Foreign Affairs (FDFA)

Head of the Federal Department of Economics, Education and Research (EAER)

Head of the Federal Department of Finance (FDF)