Adrien Lachenal (born May 19, 1849 in Geneva , † June 29, 1918 in Versoix , resident in Plan-les-Ouates ) was a Swiss lawyer and politician ( FDP ). From 1880 to 1892 he was a member of the Parliament of the Canton of Geneva , from 1881 to 1884 of the Council of States . He was then National Councilor and twice President of the National Council . In December 1892 he was elected to the Federal Council, of which he was a member until 1899. In 1896 he was Federal President . After resigning from the state government, he remained politically active for almost two decades.

He was the son of the court usher Jacques Lachenal and Marie-Thérèse Jacquier. After graduating from high school , he studied law at the universities of Geneva , Paris and Heidelberg . He was a member of the academic community Belles-Lettres and graduated in 1872 with a licentiate from, the same year he received the Geneva bar exam . In 1874 he was employed as a deputy public prosecutor . He held this position for four years and then opened his own law firm. In 1878 he married Anne Louise Eggly, with whom he had four children. One of his sons had the same name. Adrien Lachenal Jr. (1889–1962) was u. a. President of the International Association for Legal Protection of Workers .

Lachenal stood out in court as an excellent speaker and defense attorney, and gained notoriety through defense mandates in sensational trials. From 1885 to 1892 he was a substitute judge at the Geneva Cantonal Court. Lachenal was accepted into the Masonic Lodge "Fidélité et Prudence", of which he was master from 1890 to 1893 and in 1900. His military career led him to the rank of lieutenant colonel . In addition, he was chairman of the Military Court of Cassation and member of the Masonic lodge “Fidélité et Prudence”, which he temporarily chaired. Although he was Catholic, Lachenal was involved in the Kulturkampf on the side of the radicals. Supported by Antoine Carteret , he was elected to the Grand Council in 1880 , of which he was a member until 1892. Soon he was one of the most influential politicians in the radical group. In time he switched to a policy of reconciliation. His involvement in social policy ultimately led to the formation of an alliance with the socialists.

In 1881 the Great Council elected Lachenal to the Council of States . In this, he spoke in particular on topics in the areas of the military, customs and finance. After the parliamentary elections in 1884 , he moved to the National Council , and in 1885 and 1891 he was President of the National Council . He mainly dealt with trademark protection , the expansion of liability law as well as debt collection and bankruptcy law .

After Numa Droz announced his resignation at the end of 1892, the search for a suitable successor began. In particular, this should bring the tense Swiss-French trade relations back on track and avoid a customs conflict. Initially, the focus was on Robert Comtesse from Neuchâtel , but then, given the deteriorating relations with France, a Geneva candidate seemed more suitable. The liberal center wanted to propose Gustave Ador , but the latter turned down a candidacy. This cleared the way for Lachenal. On December 15, 1892, he prevailed in the first ballot with 139 of 169 valid votes; Comtesse received 22 votes and other people eight votes. Two weeks after the election, Switzerland broke off its trade relations with France.

On January 1, 1893, Lachenal took over the Political Department . Like his predecessor Droz, he also broke the usual rotation principle at the time, according to which the foreign minister changed annually. Lachen's most urgent task was the normalization of economic relations with France. After a few months he succeeded in regaining the previously usual customs tariffs, at least for the free zone around Geneva. Thanks to the influence of the Franco-Swiss Chamber of Commerce Union franco-suisse , interested in free trade , he finally succeeded in the summer of 1895 in reaching a permanent solution and ending the trade war that France had started. In addition, Switzerland established official diplomatic and economic relations with Bulgaria, Japan, Norway, Romania, Spain and Tunisia. In 1896 Lachenal was Federal President and in this function opened the National Exhibition in Geneva. In the same year, he was the last Federal Councilor to be elected by compliments .

Due to the reintroduction of the rotation principle, Lachenal gave up his post as foreign minister in 1897 and moved to the trade, industry and agriculture departments . In addition to establishing further trade relationships, he was also involved in organizing the Swiss presence at the 1900 World Exhibition in Paris . From 1898 he headed the Department of the Interior . He drafted laws on health and accident insurance, and also campaigned for the standardization of civil and criminal law and for the repurchase of the railways. He was increasingly marginalized in the Federal Council, especially since he was often absent due to illness. On December 13, 1899, he announced his resignation at the end of the year and asserted health reasons. 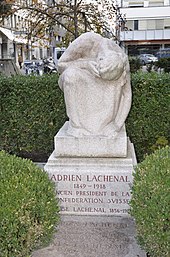 Grave of Adrien Lachenal in Geneva

Lachenal was re-elected to the Council of States in October 1899 and was a member of it until his death. He continued to advocate improvements in trade and customs legislation. From 1900 to 1912 he was represented a second time in the Geneva Grand Council. He took on a mediator role between liberals and conservatives on the one hand and between Catholics and Protestants on the other. He initiated the law on the separation of church and state , which came into force in 1907 . He was also a member of the Board of Directors of the Swiss Federal Railways and the Commission of the Swiss National Museum .

His grave is on the Cimetière des Rois in Geneva, with a sculpture by the sculptor Carl Albert Angst.

Head of the Federal Department of Foreign Affairs (FDFA)

Head of the Federal Department of Economics, Education and Research (EAER)

Head of the Federal Department of Home Affairs (FDHA)