This article describes the municipality in the canton of Geneva, the river of the same name can be found under Versoix (river) .

Versoix is a municipality in the canton of Geneva in Switzerland . It is located about 10 kilometers north of Geneva (center) on Lake Geneva .

The neighboring communities are the Vaudois communities Mies VD and Chavannes-des-Bois and the Geneva communities Collex-Bossy and Genthod . In between, Versoix borders on France to the northwest .

The Versoix River, which has its source on French territory, flows out at Versoix .

The main road 1 runs through the village, to the west of it the motorway 1 with junction 8 - Versoix. The community is located on the Lausanne – Geneva railway line , which has been continuously navigable since 1858. 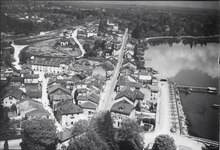 Versoix is ​​best known for its port, which was one of the main poles of trade on Lake Geneva in the 14th century, and its village surroundings, which have been well preserved, despite the fact that Versoix received city status during the 1990s (in Switzerland Places with more than 10,000 inhabitants are considered cities). From 1571 until it was lost to France in 1621, the rule (from 1598 the Marquisate) Versoix belonged to the Bernese patrician family von Wattenwyl .

The legislative power is exercised by the municipal council (conseil municipal) . It has 27 seats and is elected directly by the people every five years using proportional representation with a 7 percent hurdle. The municipal council determines the city budget and votes on submissions from the city government (conseil administratif) . He can also launch initiatives himself. The graphic above shows the distribution of seats after the last municipal elections in March 2020.

Political communities in the canton of Geneva