The title of this article is ambiguous. Further meanings are listed under Tagsatzung (definition of terms ) . 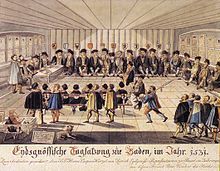 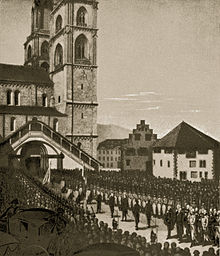 Contemporary presentation of the penultimate diary in Bern in September 1847

The Diet was in Switzerland to 1848, the Assembly of the delegates of places ( cantons ) of the Old Confederacy . It had both executive and legislative powers, but its power was very limited, as it mostly rested with the cantons. The term “Tagsatzung” is derived from the phrase “set a day” and means the agreement of a (legal) day or the date for this meeting.

The daily statute was the most important communication platform for the Swiss Confederation, both internally and externally. In an international typological comparison, the Federal Diet, as an assembly of political and social equality, can be compared in many ways with the numerous assemblies of estates in other countries. In contrast to them, however, she did not face a prince and did not negotiate taxes. In the eyes of the English diplomat Abraham Stanyan , who was in Switzerland during the peace negotiations in Baden in 1714 , the statute constituted “the Majesty of the Helvetick Body”, thus embodying the political association as well as the sovereign prince elsewhere.

The first meetings took place in Brunnen (1315), Beckenried (since 1291?), Later, depending on requirements, in Zurich , Bern , Lucerne , Baden , Aarau , Altdorf (since 1357), Schwyz , Bellinzona , Stans (from 1320), Zug , St. Gallen , Wil , Freiburg , Lugano and Locarno , Grandson (only for Bern and Freiburg) and Neuchâtel (1512–1529). In Constance there were a lot of negotiations with the southern German cities and Austria (since 1315). Meetings were held in Solothurn , to which the French envoy invited. In addition to the common federal assemblies , separate assemblies or conferences of the Catholic and Reformed places took place after the Reformation .

In December 1481, a special agenda of the eight places in Stans resulted in the Stans Decree .

The ordinary statutes began from 1424 on the Wednesday after Pentecost , from 1462 on the second Sunday after Corpus Christi (Thursday after Trinity ) - i.e. between May 31 and July 4 -, from 1587 on the Sunday after Johannes Baptista (June 24), from 1712 annually on the Monday after Peter and Paul (June 29) and lasted up to three weeks.

The assembly took place in different places, but Baden in the common lordship of the county of Baden was particularly popular because of the thermal baths and the diversions associated with them. The most important transactions that affected the entire Swiss Confederation before 1712 were negotiated exclusively in Baden's town hall . B. from 1424 the decrease of the annual accounts of all common rulers, but also decisions about war and peace. For example, decided on 11 March 1499 when the Swiss Confederates in a Diet that in the battles of the recently begun Swabian War against the Swabian League and the House of Habsburg should be made no prisoners and "dismissed" wounded enemy fighter. A decision that is still effective today was made by the Diet when in 1505 Pope Julius II sent 150 mercenaries at his request to protect the Vatican . This ultimately resulted in the Swiss Guard .

After the Second Villmerger and Toggenburg War in 1712, the daily statute came together alternately in Baden and Frauenfeld (1742–1797 constantly in Frauenfeld), where it was used for the annual accounts of the German lordships of Thurgau , Rhine Valley , Sargans , Gaster , Uznach and Baden as well the free offices met.

As a result of the mediation act , the agenda was restored as an assembly of the members of the cantons of the Swiss Confederation in 1803 and remained in place after the restoration in 1815. However, their competencies were still curtailed. The canton in charge of implementing the agenda also held the chairmanship and was referred to as a suburb .

In 1848 the parliament drafted the first Swiss federal constitution . In doing so, it founded the modern Swiss federal state and dissolved itself and the federal treaty of 1815.

The head of government of the suburb cantons acted as president of the Diet. The term of office was normally from January 1st to December 31st.