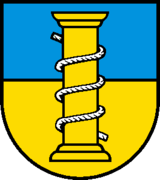 Coat of arms of the Freiamt

The Freiamt (formerly Freie Ämter ) is a region in Switzerland and is located in the southeast of the canton of Aargau . It covers the area between the Lindenberg and the Heitersberg as well as from the terminal moraine near Othmarsingen to the Reuss near Dietwil . Today the area of ​​the two districts Bremgarten and Muri is called Freiamt. The area around Affoltern am Albis in the canton of Zurich used to be known as the (Zurich) Freiamt.

The rural area in the Reuss and Bünztal valleys is popularly known as the “black continent” due to the predominantly Catholic population. Bremgarten , Muri , Sins , Villmergen and Wohlen are among the most important localities in the Freiamt; Another metropolitan area is the region around Mutschellen .

According to statistical criteria, only Wohlen is a city, while Bremgarten has had city ​​rights since the Middle Ages . The Freiamt is in a central position in the Central Plateau . Zurich , Zug and Lucerne can be reached in half an hour by car .

In the Middle Ages, Freiamt did not refer to an area, but to an association of free farmers who were subordinate to a court. The name can be found in the areas populated by the Alemanni in the Black Forest (from the 3rd century) and in the Swiss Plateau (from the 6th century). It can be traced back to the legal Alemannic division into free and unfree and the autonomy rights documented in the early Middle Ages .

In the Middle Ages, the designation of the Aargau Free Offices referred to the fact that the offices existing in the area under Habsburg rule were independent and independent of each other with regard to lower jurisdiction and customary law, i.e., according to the understanding of the time, "free". 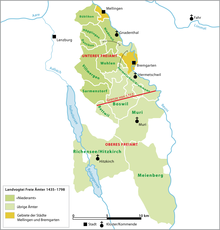 Map of the Landvogtei Freie Ämter

The area of ​​today's Canton of Aargau was conquered by the Confederates in 1415 . Under Habsburg rule, Aargau was divided into offices that were retained under federal rule. Bern, Lucerne and Zurich each received part of the conquered offices as subject areas, while the rest of the places involved in the war were administered jointly as so-called common rule . From the beginning, the Muri office was assigned to the rule of the six towns of Zurich, Lucerne, Schwyz, Unterwalden, Zug and Glarus, while the offices of Meienberg, Richensee and Villmergen initially fell to Lucerne alone. The definitive demarcation of the boundaries was determined by an arbitration tribunal in 1425, and Lucerne had to assign the offices of Meienberg, Richensee and Villmergen to the common rule as well. The four offices have now been combined to form a federal bailiwick, which in the 15th century was referred to as the "Vogtei im Waggental" and since the 16th century as the "Vogtei of the Free Offices". The lower court rulers in the area also had to recognize federal sovereignty in the course of the 15th century. In 1532, the canton of Uri was finally accepted into co-rulership.

The bailiwick of the free offices was administered as common rule alternately by the six or later seven participating places of the Confederation for two years each. However, the bailiff did not reside in the area itself. From 1435 the bailiwick was divided into 13 sub-offices, which were headed by a mostly local sub-bailiff: Bettwil , Boswil , Dottikon , Hägglingen , Hermetschwil , Meienberg , Muri , Niederwil , Richensee , Sarmenstorf , Villmergen , Wohlen and Wohlenschwil .

In 1529, especially in the lower Freiamt, numerous communities changed to the Reformed faith. The Catholic cantons of central Switzerland could not tolerate this, however, as they feared they would lose control of the strategically important area between the reformed cantons of Bern and Zurich. After the reformed defeat in the Second Kappel War of 1531, the municipalities of the Freiamt had to return to the Catholic faith, and the Catholic canton of Uri was also accepted into co-rule. The cities of Bremgarten and Mellingen with their strategically important bridges over the Reuss were also placed under the supervision of the governor of the free offices.

The expulsion of 37 Reformed from Arth as well as the extradition of three people to the Inquisition and the execution of the death penalty against a further four Reformed members led Zurich to declare war on the five central Swiss cantons in 1656. The aim of the First Villmerger War was to revise the provisions of the second Kappel Land Peace. It was Rapperswil unsuccessfully besieged, 9000 Bernese soldiers marched in Freiamt. On January 24, 1656, the First Battle of Villmergen took place, in which around 600 people from Bern and 200 from Central Switzerland died. The Third Land Peace finally confirmed the old confessional regulations.

After the Second Villmerger War in 1712, which was decided by the Second Battle of Villmergen , the victorious Reformed towns divided the Freiamt into two halves in the Peace of Aarau. The dead straight dividing line led from the church in Oberlunkhofen to the gallows in Fahrwangen and ran right through Boswil . In the upper offices, the Catholic places were allowed to have a say, but in the lower offices only the Reformed places Bern , Zurich and Glarus ruled in a ratio of 7: 7: 2. In addition, the reformed Bern was also included in the co-rule in the upper offices. The strategically important river crossings in Mellingen and Bremgarten were, like the lower Freiamt, exclusively under Bern, Zurich and Glarus.

In 1798, by order of the French, the free offices were combined with the county of Baden to form the canton of Baden . This against the will of the population, who favored a connection to Zug or Lucerne . In 1803 Napoleon Bonaparte ordered the merger with the canton of Aargau. The two districts of Bremgarten and Muri were created . The name Freiamt changed to a landscape designation.

The peasant mentality and the traditional focus on central Switzerland did not get along well with the new state, which was dominated primarily by Reformed people from the Bernese Aargau . In 1830, the Catholic rural population rose up to the Freiämtersturm against the majority Protestant cantonal government. Between 5000 and 6000 armed free offices forced the drafting of a new constitution in Aarau under the leadership of Merenschwander innkeeper and Grand Councilor Johann Heinrich Fischer . Contrary to the original intention, however, this paved the way for liberal politics.

The diocese dispute, the state patronizing the monasteries from 1834, the dispute over the Baden articles and the school law of 1835 caused new unrest, which culminated in the Aargau monastery dispute . The Aargau government decided to occupy the Freiamt militarily. Because of the arrest of the Catholic-Conservative Bünzer Committee, there was an open fight between January 10 and 14, 1841, in which the prisoners were freed. The government troops put down the uprising in Villmergen and occupied the Freiamt with 10,000 men. Thereupon the Grand Council decided to abolish the monasteries. The Benedictines finally had to move away from the once powerful Muri monastery . The Benedictine nuns from Hermetschwil Monastery also had to leave their abbey, but were able to return in 1843. It wasn't until the state was founded in 1848 that religious tensions eased.

Signposts of the two free official routes; the Ämtlerweg is in the Zurich Freiamt

Freiamt is gradually disappearing in the minds of the residents. Globalization and political realities do not leave much room for a region that only exists historically and socially. The traditional ties with central Switzerland were retained, especially in the upper Freiamt. This is reflected u. a. in cultural areas, Catholicism, mentality and in dialect (well-known Freiamt poets were Josef Villiger and Robert Stäger-Donat ). In general, the residents of the Freiamt still refer to themselves today as “Freiämter” and not as “Aargauer”, which refers, among other things, to the historical hostility with the reformed Bernese Aargau. In 2003 the communities created a hiking trail, the Freiämterweg, as a sign of solidarity.

Coat of arms and flag

Freiämter coat of arms
painted in the Alte Kanti Aarau

The coat of arms and the flag of the free offices have come down to us in different versions. A distinction must be made between flag and coat of arms, as the historian Jean-Jacques Siegrist pointed out in a detailed statement in 1977.

The Freiaemter flag goes back to the so-called Julius banner from Pavierzug 1512 back, which by Pope Julius II. By his Cardinal Matthew Schiner was presented with associated flags letter as a reward for victory over the French. The banner was later lost and is only attested by the flag letter in Latin. In it the field is described as golden yellow (flavius) and saffron yellow (croceus), covered with a golden column of torture wrapped in a silver cord . This heraldically questionable composition of the tinctures can only be explained by confusing the term croceus with ceruleus (blue). An anonymous source from 1513 describes the flag field as divided by yellow and blue, another from around 1537 as divided by blue and yellow.

Coat of arms of the Free Offices, in the book by Josias Simmler, 1645 .

The Freiämter coat of arms is for the first time 1598, and then passed down pictorially in the form of a row of March stones along the then Bernese border. The shield appears here, like almost all later boundary stones, undivided. The same applies to later pictorial representations of coats of arms such as in Josias Simmler's 1645 print "Von Dem Regiment loblicher Eidgnoschracht", where the rope was replaced by a snake. This did not change with the division into upper and lower free offices in 1712, although exceptions to the rule can be proven. It was not until the second half of the 20th century, according to Siegrist (1977), that there was a shift towards the blue and yellow shield division of the coat of arms, although the coat of arms painted on in the Alte Kanti Aarau shows something different. In that coat of arms, which probably comes from the year of construction of the Albert Einstein House (1894), the center line is also based on the coat of arms of Muri , with a wall with three battlements. In his statement from 1977 Siegrist came to the conclusion that both forms had historical justification, with the undivided blue shield being heraldically better.