Büren on the Aare

Büren an der Aare (French: Buron sur Aar ) is a municipality in the Seeland administrative district in the canton of Bern in Switzerland .

Büren an der Aare is - as the name suggests - on the Aare river , around 15 kilometers east of Biel / Bienne and 20 kilometers west of Solothurn . The community now extends north and south of the river, with the old town on the right south bank.

The river crossing is formed by a wooden bridge, which connects the municipality of Lengnau to the north with Hauptstrasse 22 (Solothurn – Lyss), which runs south of the Aare through Büren. Since 2002 the bridge has also served as a feeder to the Lengnau motorway junction .

In the northwest, the municipality includes the area in a former loop of the Aare with the nature reserve in Häftli, with the Häftli observation tower , and in the northeast an area on the left side of the river. It borders on Meienried , Safnern , Meinisberg , Rüti bei Büren , Lengnau BE , Grenchen, Oberwil bei Büren , Schnottwil , Diessbach bei Büren and Dotzigen .

The highest point of the municipality is located in the southwest on a mountain 596  m above sea level. M. The Bürener speak of Stedtiberg , while for the residents of Dotzigen it is the Dotzigenberg . 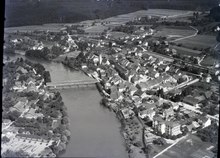 Büren was founded in the 12th century by the barons of Strassberg . The first documentary mention goes back to the year 1185. In 1260 the place received city rights, which were confirmed again in 1288.

Thanks to its convenient location, Büren quickly became an important location as a crossing over the Aare. The historic core ( Stedtli) , which still exists today, was gradually built. In 1375, the last Count of Nidau , Rudolf IV, died in Büren an der Aare while defending the city against the Guglers . With his inheritance, the area on the Aare passed to the Counts of Kyburg . In 1388 Bern conquered the place.

The Rütithor was removed in the 1840s and the Dotzigenthörlein followed in 1906 . In 1911 the previously independent municipality of Reiben merged with Büren an der Aare.

In 1921 and 1925, two city fires led to the last major redesign of the historic townscape.

A wooden bridge has been connecting historic Büren with the district of Reiben north of the Aare since the 13th century. Since then, the wooden structure has been destroyed eight times by floods, ice or fire. Among other things by the Bernese troops when the French invaded in 1798. It was rebuilt in 1821.

In the course of the Jurassic conflict , Büren, as the capital of the then still existing administrative district of Büren, was the scene several times. In November 1987, alleged Béliers carried out an arson attack on the wooden bridge, which however failed.

Another arson attack led to the complete destruction of the bridge on April 5, 1989. Shortly after 4 a.m. the historic river crossing was in full fire. In order to delay the fire brigade, the locks in the fire brigade magazine were glued with glue by strangers. 150 emergency services from Büren and the surrounding communities fought the full fire, but were ultimately only able to save the soil structure, so that shortly after the fire at least a pedestrian walkway could be built over the destroyed bridge. The arsonists were never caught, but due to the similarity to the attack in 1987 they are most likely also part of the Béliers . In 1991 the new building, the ninth bridge, was opened to traffic.

Internment camp Büren a. A.

During the Second World War , from 1940 to 1946, Büren an der Aare was the largest internment camp in Switzerland, which was set up as a result of the German occupation of southern France for members of a Polish division of the 45th French Army Corps. The Büren an der Aare internment camp was designed for 5,000 to 6,000 inmates. The Aare flowed around it on all sides and was out of the town.

The camp with its 120 barracks, a commandant's office, camp offices, material magazines as well as accommodations for the guard and care personnel was surrounded by a barbed wire fence and machine-gun-equipped watch towers. After March 1942, the camp was no longer needed for interning military personnel. The Swiss army later looked after Jewish refugees, Italian military refugees and escaped Soviet forced laborers.

In Oberbüren, a part of the municipality of Büren, there was a pilgrimage church in the Middle Ages . It was a so-called sanctuaires à répit , a resurrection shrine . Stillborn children were "brought to life" by warming just long enough to be baptized. This arose from the necessity of baptism for salvation . After the Reformation the Marian shrine was abolished, the church demolished and in 1534 the pilgrimage was violently suppressed.

A community meeting is held regularly in Büren .

Büren an der Aare is recorded in the electoral archive of the Canton of Bern together with the municipality of Meienried .

Büren is located on Hauptstrasse 22 , which bypasses the historic core to the south. The Grenchen motorway connection can be reached via this.

From the historic center, connecting roads lead over the wooden bridge to Lengnau and to the Lengnau motorway exit of the A 5 .

Since 1952, Büren an der Aare has also been connected to Solothurn and Biel by a shipping line.

Büren has a well-preserved old town. The city fortifications were almost completely demolished in the 19th and 20th centuries. The former castle of the Bernese bailiffs, today the seat of the district administration, is located on Hauptgasse.

In Büren an der Aare there is a grain mill built in 1684.

Büre-Nöijoor on 1st / 2nd January: a custom that is over 400 years old and constantly changing, one of the first carnivals in Switzerland with a “ Chesslete ” and a costumed parade of the “young boys”; on January 2nd, the figure of «Nimmerselig», symbol of winter, is burned on the market square.

Political communities in the administrative district of Zealand