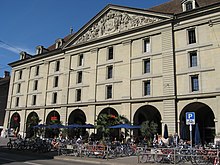 The Berner Kornhaus with the gable field designed by Johann Rudolf Huber (2009).

The Kornhaus in Bern is a former granary and today's cultural center in the upper floors and a restaurant in the basement at Kornhausplatz 18 in the old town of Bern . 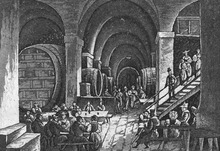 The large granary cellar, around 1830

The granary made of Bernese sandstone was built between 1711 and 1715 according to plans by the brothers Hans Jakob and Abraham Dünz the Younger . The existing urban grain to 1798 office to which the grain house belonged administratively was created 1482 and with the Kollaturen equipped to Kirchberg, Utzenstorf, Kriegstetten and Rudswil including tithe, bonds and ground rents. The Corn Office was administered by a corn lord of the Small Council until 1617, then the Grand Council. Wine and grain were stored in the granary for the purpose of paying city salaries.

In 1895, the municipality of Bern had the building converted into a trade museum by the architect Paul Adolphe Tièche , with a post office being quartered on the ground floor. Between 1896 and 1898 the cellar was turned into a large festival hall by the architect Friedrich Schneider , and after a competition Rudolf Münger was commissioned to paint it with literary and poetic frescoes . Here you will find the Kornhauskeller restaurant , popularly known as Chübu ( Bern German for "bucket"). In addition, the Kornhaus now houses the main library of the Kornhaus libraries , a stage and the box office of the Bern City Theater , a café and a forum for exhibitions, panel discussions, symposia, lectures, video programs, readings and concerts.

The Kornhauskeller restaurant and the café are run by Bindella ; the latter should give way to a pizzeria .