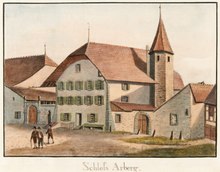 Aarberg Castle, seat of the bailiff of Aarberg, aquatint by Jakob Samuel Weibel (around 1825)

The Office Aarberg was from 1358 a bailiwick of the city and Republic of Berne in Switzerland . It consisted of the town of Aarberg and the parishes of Affoltern, Bargen, Kappelen, Kallnach, Lyss and Radelfingen. Count Peter II pledged «1351 his town, castle and county Aarberg to the city of Bern». The remaining claims and pledges had to be bought. 1379 by the Countess von Thierstein , born von Nidau, and by the Countess von Kyburg , also born von Nidau. Since the purchase of the bailiwick was not completely correct from the start due to these claims, the bailiff was initially not administered by a local bailiff, but by the mayor of Bern . Not until 1395 was a bailiff sent to Aarberg.

Districts of the Canton of Bern