Stettlen is a municipality in the Bern-Mittelland administrative district in the canton of Bern in Switzerland .

Stettlen is located in the Bern region east of the Swiss federal city of Bern in the Worblental . Nestled in the Worble valley between Bantiger and Dentenberg, the community includes, among other things, an attractive south-facing slope as the main residential area and a beautiful recreational area all around. The community includes the villages of Stettlen and Deisswil.

To the north of Stettlen, in the neighboring community of Bolligen , lies the Bantiger elevation (947 m above sea level). The Swisscom transmission tower there supplies the surrounding region with radio and television programs; it also offers a good view of the panorama of the Jura , the Swiss Plateau and the Alps .

The following items appear since 2019 is out of date to be : here the current data → https://www.bewas.sites.be.ch/2019/2019-10-20/NATIONALRATSWAHL/resultatUebersicht-de.html
Please help with that to research and insert missing information .

Jakob Samuel Weibel: Church and rectory Stettlen in the 1820s 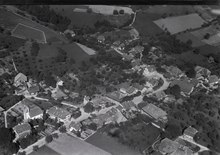 The place name Stettlen is to be understood as a diminutive of the Old High German noun "Stat" and means "small place", "cookie". The place name Deisswil probably hides the personal name of a clan chief who, also in the 1st millennium, had gained new farmland with clearing and Schwenden.

Stettlen was first mentioned in 1146 as Stetelon , and before 1200 the place came under the castle rights of the young city of Bern.

A schoolmaster in Stettlen is mentioned for the first time in 1620 and a school building was built in 1728. The number of pupils in 1780 is given as 80 to 90. In the second half of the 18th century, most families lived directly on the yield of the land. Crafts and trades were given little attention. A new development and a profound change in the livelihood structure of the village was initiated in 1876 with the establishment of the cardboard factory in Deisswil, and the Worblentalbahn , which opened in 1913, contributed to the fact that Stettlen moved even closer to the city.

After the playgroup and kindergarten from the age of 5, the Bernstrasse and Gartenstrasse schools offer the lower grades up to the 4th grade and the Bleiche school house the junior high and secondary grades up to the 9th grade. The secondary school level up to the fourth can be attended in the neighboring village of Bolligen . Stettlen has two gyms and an indoor swimming pool.

Political communities in the administrative district of Bern-Mittelland