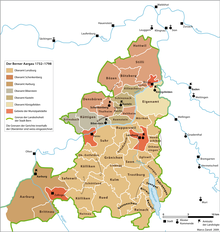 Own office in the Bernese Aargau until 1798

In the Middle Ages, the area between the Aare and Reuss, south of Brugg in what is now the Swiss canton of Aargau , was called self-office . It included the present-day communities of Birr , Birrhard , Brugg, Brunegg , Habsburg , Hausen , Lupfig , Mülligen , Scherz , Schinznach-Bad (formerly Birrenlauf) and Windisch .

Between the 11th and 13th centuries, the Habsburgs were able to acquire almost all rights to rule in this area around their ancestral seat . This included land, court and tithe rule . The Eigenamt got its name because the Habsburgs regarded it as their " own ". When Brugg received city ​​rights around 1200 , it was removed from its own office.

In 1397 the Habsburgs donated their own office to the Königsfelden monastery in Windisch. In 1415, the Habsburgs lost their homeland when Bern conquered the western part of what is now the Canton of Aargau (the so-called Bernese Aargau ) and also took over sovereignty over its own office. In 1528, Bern introduced the Reformation in all of its subject areas . The Königsfelden monastery was dissolved and all rights passed to Bern. The former monastery became the seat of the Bernese court master , the private office was now called Oberamt Königsfelden. Because of the fertile soils, it was considered the most lucrative of all Bernese bailiffs.

The Oberamt was dissolved in 1798 after the Helvetic Republic was proclaimed . The name Eigenamt remained for a while as a landscape designation, but was then gradually replaced by the geographical term Birrfeld . Today u. a. the Birrfeld airfield .