History of the Canton of Thurgau

The early medieval Thurgau (Turgowe, Turgovia) was a pagus of the Duchy of Alemannia (Swabia) .

The Landgraviate became part of the Helvetic Republic in 1798 as the canton of Thurgau and with the mediation constitution of 1803 became a canton of Switzerland with equal rights . 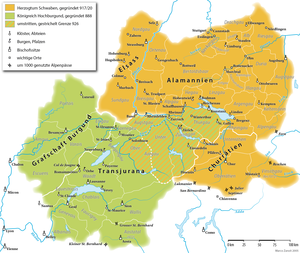 The early medieval Thurgau in the Duchy of Alemannia was named after the Thur as the main river of the area and corresponded to the Alemannic area between the Rhine and Reuss . With the Alemannic settlement of central Switzerland in the 8th century, it finally reached south to the upper reaches of the Reuss in the Schöllenenschlucht , including the area of ​​the later cantons of Zug , Schwyz , Nidwalden and Uri (excluding Ursern ).

Thurgau is first mentioned in a document from around 745 (743-746), in which places in the Töss Valley and on the upper Lake of Zurich are assigned “in pago Durgaugense , in sito, qui dicitur Zurihgauvia”.

In the 9th century the Zürichgau was separated from the Thurgau. The border between Zürichgau and Thurgau ran along the Töss and the Allmenkette to the left of the Töss; the Zurichgau thus also included the central Swiss areas on the right bank of the Reuss. As part of the high medieval ancestral duchy of Swabia , Thurgau roughly corresponded to the area of ​​today's canton Thurgau , both Appenzell , Constance and parts of today's cantons St. Gallen ( Fürstenland and Toggenburg ) and canton Zurich (east of the Töss: Weinland , Winterthur , Tösstal) ).

In the early 10th century, when the duchy was torn by bitter disputes between rival noble families, King Rudolf II of Hochburgund tried to extend his rule into Thurgau. After 917 he collided with the claims of the new Duke Burchard II of Swabia. In 919 there was the battle of Winterthur , in which Duke Burchard remained victorious and thus secured the Thurgau and the Zürichgau.

After 746, Thurgau was ruled by Franconian counts, in the 9th century by Burchardinger counts, and in the 10th and 11th centuries by the counts of Winterthur .

Map of the jurisdictions in the Landvogtei Thurgau in the middle of the 18th century.

Lands of the Prince Abbey of St. Gallen after 1468

After the collapse of the Duchy of Swabia in the 13th century, the area of ​​the former County of Thurgau came into the possession of various feudal lords. a. the prince abbey of St. Gallen (immediately imperial since 1180), the Counts of Toggenburg , the Zähringer , Kyburger , Landenberger and Habsburgs . From the 15th century, parts of it fell into the area of ​​the Old Confederation ( Appenzell 1403 and sales by the Habsburgs to Zurich ).

From 1264 to 1460 the Landgraviate of Thurgau was under the rule of the Counts of Habsburg . However, at the end of the 13th century the Habsburgs were interested in the new possessions in Austria , and they had the regional court administered by baronial regional judges; in addition, Austrian provincial bailiffs appeared. In addition to the regional court and the bailiwick, the Counts of Habsburg owned numerous goods and interest rights in the area of Frauenfeld and Diessenhofen , which are recorded in the Habsburg land register.

The Thurgau nobility took part in most of the armed conflicts between the Dukes of Austria and the Confederation on the Austrian side. In the Battle of Morgarten, in addition to many nobles and miners, three knights from Bichelsee , three from Weinfelden , four from Landenberg and one from «Luterberg» were killed. Numerous Thurgau nobles fell at the Battle of Stoss in 1405. Thereupon the Appenzeller devastated almost the whole of Thurgau and broke several castles or forced them to hand over. Altenklingen , Bürglen and Frauenfeld alone defy their siege. During the imperial ban of 1415 Duke Friedrich of Austria through the Roman-German King Sigismund , Burgrave Friedrich of Nuremberg occupied Thurgau as a completed imperial fief . The two permanent cities of Diessenhofen and Frauenfeld surrendered after some hesitation.

Thurgau became imperial for a short time and the city of Diessenhofen was even able to acquire the rights of a free imperial city (until 1442). The later Emperor Sigismund, however, pledged the Vogtei Frauenfeld in 1415 and the district court of the city of Constance in 1417.

After the federal conquest of Aargau under the same imperial ban, the Confederates strived for the Rhine and Lake Constance as a natural border. In 1417 they applied for free for the regional court, but the counties Kyburg (1424) and Andelfingen (1434) were bought by Zurich on their own .

In 1460 the Landgraviate of Thurgau was conquered by the seven federal locations of Zurich , Lucerne , Uri , Schwyz , Unterwalden , Zug and Glarus - but the Thurgau Regional Court remained in the city of Constance until 1499 .

In 1512 the subject area of ​​the Bishop of Constance received a valuable " Julius banner " from Pope Julius II for the services rendered in the "Great Pavier Campaign" from 1508–1510 to expel the French. The Reformation almost completely prevailed in Thurgau in 1529, but during the Counter Reformation in the 16th and 17th centuries. In the 19th century, numerous Thurgau localities were re-Catholicized.

From 1460 to 1798 the Thurgau was a common rule of the seven or from 1712 with Bern , eight ruling places of the Old Confederation . In the 18th century, the area of ​​the Landgraviate essentially corresponded to that of today's canton (the Rheinau exclave was separated in 1803 ; the Horn exclave remained in Thurgau ). In addition to the eight places mentioned, Freiburg and Solothurn also contributed to the revenue of the regional court ( Malefiz ).

Coat of arms of the canton of Thurgau . Blazon (excerpt from the decree): The canton's coat of arms consists of a diagonally divided shield, of which the upper part is white and the lower part light green; in both fields there are two leaping lions, (...).

Thurgau was freed on March 2, 1798, but in April Thurgau became an administrative unit of the Helvetic Republic , and in 1803 an independent canton of the Swiss Confederation with equal rights .

The coat of arms of the canton of Thurgau, designed according to the historical coat of arms of the Kyburgs , was determined by the provisional government commission on April 13, 1803. Since the coat of arms does not comply with the strict rules of heraldry (gold on silver), there were repeated attempts to change it. The government council of the canton of Thurgau proposed a new draft to the Grand Council in its message of March 23, 1948 , but the Grand Council rejected the change and wanted to keep the golden lions.

After the July Revolution of 1830 , the Thurgau, under the leadership of Pastor Thomas Bornhauser, started the democratization of the Swiss cantons through its new constitution, which was adopted on April 26, 1831. Since then, Thurgau has consistently belonged to the liberal cantons, took part in the decisions of the Baden conference , closed all but one of its monasteries in 1848 and declared itself in favor of the new Federal Constitution in 1848 . In the referendums of 1872 and 1874, Thurgau was both on the side of the supporters of a new federal constitution. His own Basic Law has also been modernized several times: After it had been revised in 1837 and 1849, the democratic movement demanded a new cantonal constitution from 1868, in which the referendum , the popular initiative , the direct popular election of the cantonal government and other innovations should be anchored, what with the constitution of February 28, 1869 was concluded.

In 1920 the Grand Council was first appointed according to proportional representation , in 1988 a constitutional revision abolished the typical Thurgauian dualism of local parishes and municipal parishes (see former municipal organization of the canton of Thurgau ) in favor of uniform political parishes , and in 1990 the new canton constitution from 1987 came into force.

To mark the 200th year of independence for the canton of Thurgau, the association “Thurgau women - yesterday - today - tomorrow” published a book that focuses on the memorable stages in Thurgau's women's history. The Thurgau Women's Archives also hold events on historical topics on a regular basis.

History of the cantons of Switzerland