Weinfelden is a city, political municipality and capital of the district of the same name in the canton of Thurgau in eastern Switzerland . Weinfelden had 11,305 inhabitants at the end of 2017. Several cantonal institutions have their headquarters here because of the more central geographical location opposite Frauenfeld , the capital of the canton, such as the Thurgauer Kantonalbank and the Thurgauer Administrative Court. The Grand Council, the parliament of the canton of Thurgau, meets in Weinfelden during the winter months.

There was evidence of a five-meter-wide Roman bridge over the Thur at Weinfelder's location as early as 124 , which suggests that a trading center already existed at that time. The name Weinfelden did not appear until 838 in a deed of donation to the St. Gallen monastery . The name at that time was Quivelda (= "Winis field").

In the early modern times, the place was owned by changing noble and patrician families. In the middle of the 16th century, the lords of Mundpratt owned the place. In 1551 Hans Dietrich von Gemmingen from the Gemmingen-Steinegg line , who was married to a Mundpratt daughter, acquired the Weinfelden estate. In 1555 he sold Weinfelden to the Fuggers . In 1572 the place was owned by Arbogast von Schellenberg . In 1575, Eberhard von Gemmingen and his brothers from the Gemmingen-Bürg line acquired the rule of Weinfelden. The barons of Gemmingen built a poor house and set up a school. The heirs sold the rule to the city of Zurich in 1614.

Weinfelden - at that time by far the largest town in the canton of Thurgau - achieved historical importance in 1798: In February of that year, Paul Reinhart and his committee led Thurgau from centuries of federal subordination (since 1460) to a brief first freedom. In 1803, the canton of Thurgau became officially independent through the mediation act of Emperor Napoléon - and Frauenfeld became the capital.

In 1830 Weinfelden achieved political importance for the second time. On October 22nd, 1830 the eloquent Thomas Bornhauser spoke to a crowd in Weinfelden, numbering in the thousands. He demanded - and also achieved in 1831 - one of the first liberal constitutions in Europe on the Rathausplatz (from the same staircase in the "zum Trauben" inn as Paul Reinhart 32 years before him). Even today in Weinfelden, Paul Reinhart and Thomas Bornhauser, the two most important politicians of the 19th century are mentioned in the same breath. Identically decorated portraits of both hang in the town hall, and there are identically designed busts of both; there is a Paul-Reinhart- and a Thomas-Bornhauser-Strasse, a Paul-Reinhart- and a Thomas-Bornhauser-Schulhaus, the Paul-Reinhart-memorial plaque on the house "zum Komitee" and the Thomas-Bornhauser-Brunnen on the Rathausplatz . 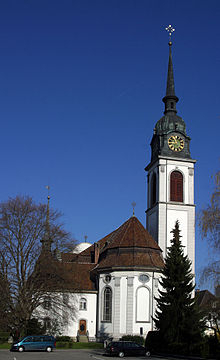 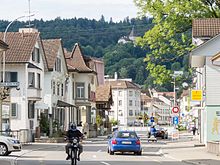 Weinfelden has a Protestant and a Catholic parish .

The Weinfelden station is the largest railway transportation hub in the canton Thurgau. Until the middle of the 19th century, the Thur valley was like an impassable wilderness. It was only when the Oerlikon - Romanshorn railway line was built by the Swiss Northeastern Railway that goods could also be transported through the canton on the west-east axis. The Bischofszellerbahn (line to St. Gallen) was opened in 1876, and in 1911 the Mittelthurgau railway began on the Kreuzlingen - Weinfelden - Wil line. Today InterCity runs in the direction of Zurich or Brig and trains from the Zurich S-Bahn to Pfäffikon SZ and the St. Gallen S-Bahn . Thus, five railway and five post bus lines intersect here. The station was completely renovated in 2002.

At the moment there is a bypass road (Dunant, Dufour and Deucherstrasse), which relieves the center of Weinfelder. There is no expressway or motorway that opens up Weinfelden. There are plans for a Thurtal / Aachtal expressway with a tunnel through the Ottenberg, which will one day be connected to the autostrasse in Arbon.

In September 2012, a similar proposal from the canton was voted again: under the name BTS (abbreviation for “Bodensee-Thurtal-Strasse”, expressway Tempo 100/80 from Weinfelden via Sulgen, Amriswil to Arbon) and OLS (“Oberlandstrasse”, main road Tempo 80/50 from Kreuzlingen via Langrickenbach to Amriswil with a connection to the BTS), two similar expansions of the road network (network decisions) as in 2005 came to the vote and were approved with 54.6% of the votes. The planning of the lines took place in 2013.

A large private company based in Weinfelden is the Model Holding , which is active in the packaging industry; Lidl Schweiz AG also maintains its headquarters and one of two distribution centers in Weinfelden.

The importance of Weinfelder as a business location can also be seen from the fact that the Thurgauer Kantonalbank , the Thurgau Chamber of Commerce and Industry and other associations are based there.

For compulsory schooling, the educational institutions include kindergartens, primary schools and secondary schools. Weinfelden is also the school location of the largest vocational training center in the canton, the BBZ Weinfelden . Middle schools and universities (in Frauenfeld, Kreuzlingen, Konstanz) are within commuter distance.

Weinfelden and the southern slope of the Ottenberg are listed in the inventory of places worthy of protection in Switzerland .

Local customs are cultivated with the Bochsel Night , among other things . Every year, on the Thursday of the last whole week before Christmas, the pupils of primary school and upper school move through Weinfelden with their own carved beets . These turnips are hollowed out and lit from the inside with a candle. The 3rd upper school classes each study a final theater, which they perform at Bochselacht, all school children are invited to the final rehearsal.

The May dance on the Stelzenhof (on the Ottenberg ) takes place on Sundays in May from 5 a.m. to 9 a.m. and is therefore known far beyond Thurgau.

There are three major events in Weinfelden every year. The first is the Weinfelder Weinfest ( Wyfescht ), which is held in late summer. The second major event in autumn is the Weinfelder commercial exhibition WEGA, which each attracts around 100,000 people. In spring there is the Schlaraffia gastronomy fair .

The Liberty Cinema with three screens and a total of 450 seats has existed since 1998 . There is an exit complex next to the cinema.

Political communities in the Weinfelden district