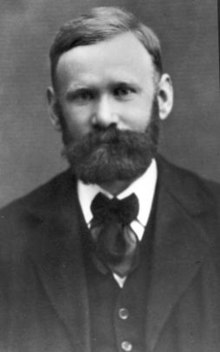 Among other things, he worried about queue problems in telephony . At the suggestion of David George Kendall , the measure Erlang was named after Agner Krarup Erlang.

Erlang developed the Erlang distribution , which is widely used in communication theory, and thus the formulas for blocking and waiting in the loss system or waiting system.

Agner Krarup Erlang grew up in poor conditions in Lønborg and was trained as a child by his father - a teacher. In 1892, at the age of 14, he passed his exams in Copenhagen with honors, having previously had to obtain a special permit due to his young age. He returned to Lonborg, where he taught as a teacher in his father's school for two years. In 1896 he passed the entrance exam to the University of Copenhagen with honors and began his studies with the help of a scholarship .

He studied mathematics and science and began to be interested in geometric problems. After receiving his doctorate in 1901, he taught for several years as a teacher in several schools. He began to be interested in probabilities . It was around this time that he met the chief engineer of the Copenhagen Telephone Company , who convinced him to use his skills in solving problems related to waiting time on phone calls.

In 1908 Erlang was hired by the telephone company and in 1909 he published his paper The theory of probability and telephone conversations - the world's first detailed study of telephone traffic. In 1917 he published the Erlang distribution and thus Erlang B and Erlang C , which were quickly picked up and used by almost all telephone companies.

In his honor in 1946, at the suggestion of David George Kendall, the base unit for traffic in a communications network was named " Erlang " by the International Consultative Committee on Telephones and Telegraphs (CCITT) (the predecessor of the ITU ) .

The Erlang programming language developed by Ericsson was also named after him.