This article gives an overview of the prehistory and early history of Central Europe from the Paleolithic to the beginning of our era.

Replica of the lower jaw from Mauer

The earliest evidence of the presence of people in the area of Central Europe, the quartzite - artifacts from the clay pit Kärlich in Koblenz are dated to an age of about 700,000 years. The lower jaw of Mauer , which is assigned to Homo heidelbergensis , dates from around 600,000 or 500,000 years ago . Further finds of Homo heidelbergensis come, for example, from Bilzingsleben in ( Thuringia ), from Schöningen and Bad Cannstatt , which are dated to around 400,000 to 250,000 years ago. Finds from the Paleolithic Age are relatively rare in what is now Switzerland. The first traces of human presence can be found in the Alps with the Neanderthals (in Mousteria).

Evidence of human settlement in Central Europe comes from around 300,000 to 200,000 years ago exclusively from warm periods . It was only around 200,000 years ago that Acheuléen sites such as Lübbow , Markkleeberg or Eythra were first settled during a cooling phase prior to the Saale Ice Age . With this begins the adaptation of Homo heidelbergensis to the cold ages and its development into the Neanderthal , who, due to its independent evolution, is most likely not one of the direct ancestors of modern humans. The Neanderthals colonized Central Europe until about 30,000 years ago.

Homo sapiens was first detectable in Central Europe about 36,000 years ago . The Upper Paleolithic begins with him. Settlement by modern humans was carried out by hunter-gatherer societies, which presumably followed the large herds of animals in the cold steppes of the time and came from Central Asia. They are known as Cro-Magnon people . Genetically, however, they did not make up the majority of today's Europeans. Some of the oldest sites are the Geißenklösterle and the Hohle Fels near Blaubeuren and the Hohlenstein-Stadel in the Lone Valley near Ulm . The works of art found there (for example the lion man ) and musical instruments from the Aurignacia are among the oldest finds of their kind in the world. The currently oldest bones of modern humans in Europe were found in Romania and are around 35,000 years old (lower jaw and facial remains). In Mladeč, Czech Republic (near Litovel ), around 31,000 BP old skull remains of two 18-year-old women were found, a fragment of the upper jaw of an older man and several teeth together with processed artifacts. The archaeological cultures of Gravettian and Epigravettian follow . The period of the subsequent cold peak up to around 20,000 years ago remained largely deserted in most parts of Central Europe.

For much of the Paleolithic Age, the Alps were almost completely covered by glaciers . Only high mountain terraces above the glaciers remained ice-free. Only during the younger Magdalenian period from around 13,000 BC. Chr. Began with the beginning of warming in the mountains, the repopulation. The Paleolithic ends with the end of the Younger Dryas phase around 9600 BC. And the beginning of the Holocene . The Middle Stone Age (Mesolithic) follows .

It is still unclear which people could be considered as the actual “ancestors” of today's Central European population. At least one previously unknown phenomenon in demography must have taken place. For example, “sudden” successful genetic changes such as the replacement of lactose intolerance in the last 6000 years or further waves of migration of Stone Age hunters and gatherers from the east come into question. The genetic examination of the genetic material of the bone fragments of 22 representatives of later hunter-gatherer societies from Russia, Lithuania, Poland and Germany ( Swabian Alb ), who lived 15,000 to 4,300 years ago, shows that they represented a very homogeneous, uniform group. Most of today's Europeans descend from them.

In pollen diagrams of Central European lakes and moors, there are signs of the beginning of arable farming (for example on Lake Zurich ) from around 6900 BC. Chr .; they cannot yet be associated with a particular archaeological culture. It is very likely that very few immigrants from the Middle East brought the new farming and livestock farming to Central Europe.

A clearly verifiable area-wide and rapid Neolithization of Central Europe (with the exception of the North-Baltic Sea area) begins around the middle of the 6th millennium BC. A. In western Switzerland, it is carried by groups that are culturally derived from the Mediterranean region . A little later, people penetrate the Danube route from south-east Europe to the north-west. Instead of the Mesolithic hunters and gatherers and fishermen, farmers with farm animals such as cattle , pigs , sheep and goats , who primarily grow emmer and einkorn , use fired clay pots and cut stone tools. The early Neolithic bearers of culture are the line ceramists and the people of the La Hoguette group . Both are at least partly there at the same time based on what they found together, but an earlier start of the La Hoguette group cannot be ruled out. The culture of La Hoguette, which is sometimes seen more as a cattle breeder than as an agricultural culture, is almost only documented by its ceramics, domestic animals have so far only been sporadically recorded, which indicates an agricultural structure. A cultural exchange between the two is documented above all in western Central Europe.

The coastal area of ​​the North and Baltic Seas was not completely neolithised until around 2000 years later. The associated groups are called funnel cup cultures.

The Celts in Europe

From around 2000 BC Metalworking is common in Central Europe, initially copper and bronze ( Bronze Age ), then from around 850 BC. Also iron ( Iron Age ). From the first half of the 1st millennium BC, most of Central Europe belonged to To the area of ​​influence of the Celtic culture.

In Central Europe, the older Iron Age is named after the finds in an extensive burial ground above the town of Hallstatt in the Salzkammergut ( Austria ) as the Hallstatt period (750–450 BC). Based on written sources from ancient times, one can assume that the Protocelts immigrated to southern Germany, Switzerland and parts of Austria . The processing of iron and the invention of the potter's wheel refined the cultural achievements of the people of that time. Political power was exercised by local princes, whose burial mounds can be found all over Central Europe. The princes of the Hallstatt period certainly owed their wealth to trade and the transport of goods over the Alpine passes, such as u. a. the great Greek bronze hydria from a grave in Grächwil (Switzerland) from the year 570 BC Occupied.

The Middle and Younger Iron Age in Central Europe is named after the La Tène site on Lake Neuchâtel in Switzerland as the Latène Age . (from approx. 480 BC to 40 BC, in some regions also up to BC ). It developed from the north-west Alpine Hallstatt culture under the influence of the Mediterranean region as an independent form of art and culture that is identified with the Celts mentioned in Greek sources in the 5th century. The La Tène period is often divided into three periods in literature:

The previously common equation of Germans and Germans is no longer upheld in today's research. On the one hand, non-Germanic ethnic groups also contributed to the development of the German people , on the other hand, Germanic tribes were also among the ancestors of non-German peoples. The equation of certain early historical peoples with today's in general is unsustainable. Originally at home on the western Baltic Sea , the Teutons invaded since around 200 BC. BC to the then still Celtic areas of central and southern Germany . 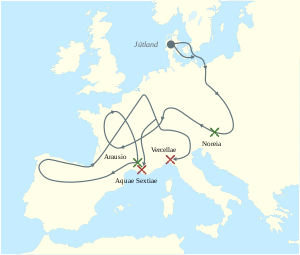 Migration of the Cimbri and Teutons

They came into the light of history towards the end of the 2nd century BC. When the North Germanic tribes of the Cimbri and Teutons advanced from Jutland to the area of ​​the Roman Empire . After defeating several legions (113 BC in the Battle of Noreia and 105 BC in the Arausio ( Orange ) ), the Roman general Marius defeated them in 102 and 101 BC. In the battles of Aquae Sextiae ( Aix-en-Provence ) and Vercellae ( Vercelli ) .

With the conquest of Gaul by Julius Caesar between 58 and 50 BC. The Rhine became the north-eastern border and the Germans became direct neighbors of the Roman Empire . The attempted conquest of the areas populated by Teutons up to the Elbe under Emperor Augustus was canceled after the battle in the Teutoburg Forest in 9 AD.

The areas west of the Rhine and southwest of the Limes border wall were added to the Roman provinces of Germania inferior (Lower Germany) , Germania superior (Upper Germany) and Raetia ( Raetia ) . The area east of it was called Germania libera (free Germania) by the Romans. The Roman historian Tacitus gave the first comprehensive description of Germania around the year 98 in his Germania .

The areas of Germania included in the Roman Empire formed part of the ancient world in the following centuries . The Celtic-Germanic indigenous population was largely Romanized. With Augsburg , Kempten (Allgäu) , Koblenz , Cologne , Mainz , Regensburg , Trier and Xanten , the oldest cities in Germany emerged. Trier even rose to become an imperial residence in late antiquity . After more German invasions as a result of the imperial crisis of the 3rd century , the Romans gave up the Limes in 260 and relocated the entire length of the border to Germania magna back to the Rhine before it collapsed during the migration of peoples .

The following bar gives an overview of how the prehistory and early history of Central Europe can be classified chronologically: