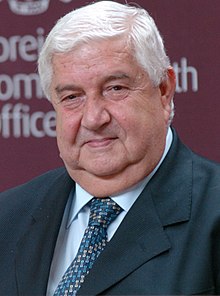 Al-Muallim attended school from 1948 to 1960 and graduated from high school. He studied economics in Cairo and graduated with a bachelor's degree in 1963 . In 1964 he started working for the Syrian Foreign Ministry. He was part of the diplomatic corps in various countries.

From 1975 to 1980 al-Muallim was Syrian ambassador to Romania , from 1990 to 1999 to the United States . During this time al-Muallim took part in the peace negotiations between Syria and Israel . In 2000 he became assistant to the Syrian foreign minister, in 2005 his deputy. On February 11, 2006, President Bashar al-Assad appointed him Foreign Minister; since 2012 he was also Deputy Prime Minister.

Al-Muallim was married and had three children.