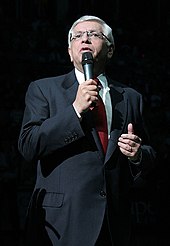 Under Stern's leadership, the NBA expanded into one of the largest and most popular professional leagues worldwide. Since 1984 the league has grown from 23 teams back then to 30 teams today. Despite reservations, Stern and FIBA General Secretary Borislav Stanković campaigned to enable professional basketball players, especially those from the NBA, to participate in the Olympic Games , for which he received the Olympic Order in 2012 . In 1996, two of the NBA subordinate leagues, the WNBA women's league and the NBA-D-League (now G-League ) development league , were founded.

On October 25, 2012, Stern announced his retirement as commissioner for February 1, 2014. His successor was Adam Silver . In 2014, Stern was inducted into the Naismith Memorial Basketball Hall of Fame and in 2016 into the FIBA Hall of Fame . On New Year's Day 2020, he died at the age of 77 as a result of a cerebral haemorrhage that he suffered in December 2019.