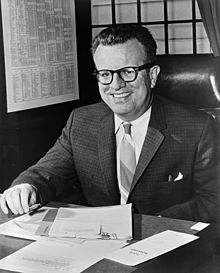 Lawrence Francis O'Brien (* 7 July 1917 in Springfield , Massachusetts ; †  27. September 1990 in New York City ) was an American politician of the Democratic Party and the third commissioner of the professional basketball league National Basketball Association (NBA).

O'Brien as a politician

His role in the Watergate affair

O'Brien's office at the DNC - headquarters was on the night of June 17, 1972 target of the failed Watergate -Einbruchs. Five men, who ultimately acted on behalf of the committee for the re-election of President Nixon , were caught by police during an attempt to install a bug in O'Brien's office.

President Nixon blamed Larry O'Brien personally for the extensive exploitation of an investigative report by journalist Jack Anderson by the Kennedy camp in the 1960 presidential campaign. Anderson had revealed that Nixon's brother Donald had received a $ 205,000 business loan from billionaire Howard Hughes in 1956 , speculating that it might have been paid for with political consideration from then Vice President Richard Nixon. The latter saw this account, which he regarded as a denunciation, as one of the main reasons that he had lost the election against John F. Kennedy. This whole affair resulted in a (well-documented) strong personal animosity from Nixon towards both Anderson and O'Brien.

As documents from the White House show Richard Nixon showed during his own tenure as president repeated keen interest in O'Brien's business activities and demanded in the years 1970 to 1972 by his co-workers repeatedly tangible evidence of the come to his ears (fact-based) Rumor has it that O'Brien himself has now covertly worked as a paid lobbyist for Howard Hughes through his firm O'Brien Associates . Nixon wanted to launch this evidence to the media in order to publicly discredit O'Brien - in an obvious revenge for the 1960 election campaign. The Republican erroneously implied both that O'Brien was working for Hughes at the same time as he was DNC chairman, and that O'Brien had not paid any taxes on money received for his lobbying activities.

A theory favored by various authors therefore sees an important motive for the Watergate break-in as the attempt (supposedly based on a direct instruction from Nixon) to either document the Hughes-O'Brien business relationship or to find out whether O'Brien again Would have receipts of a large secret donation from Hughes to Nixon's campaign fund. However, there is no evidence to support this theory about the background to the Watergate break-in.

Commissioner of the NBA and Larry O'Brien Trophy

O'Brien took over the office of NBA commissioner from Walter Kennedy in 1975 and held it until 1984. Under his leadership, the NBA merged with the American Basketball Association in 1976 , adding four teams ( Denver Nuggets , Indiana Pacers , New York Nets , San Antonio Spurs ) expanded. A fifth new team followed in 1980 with the Dallas Mavericks . In total, the NBA comprised 23 teams at the end of O'Brien's tenure. Under his leadership, a contract with a cable television provider was also concluded in 1982, making the NBA a pioneer among the US professional leagues. On 13 May 1991 O'Brien was posthumously as "promoters" ( Engl. : Contributor ) into the Naismith Memorial Basketball Hall of Fame added.

The Larry O'Brien Trophy is the trophy that the winner of the NBA receives when they win the title. Each year a new trophy is made with the year and name of the winning team engraved on it and remains in the possession of the team.

Chair of the Democratic National Committee