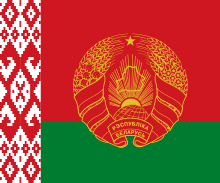 Standard of the President

The 2020 presidential election in Belarus ended on August 9, 2020. Eligible voters were able to cast their votes as early as August 4. The election in Belarus (Belarus) was accompanied by ongoing protests in the country and overshadowed by the COVID-19 pandemic . It is considered a sham election because relevant opposing candidates have been arrested and election manipulation has been proven. After the election, the opposition candidate Svyatlana Zichanouskaya fled to Lithuania . In the daily protests, over 6,000 people were arrested, 250 injured and two killed as of August 13, 2020. The police sometimes shot demonstrators with live ammunition.

Since the collapse of the Soviet Union and the establishment of an independent Belarusian state in 1991 were five presidential elections (June 1994, September 2001, March 2006 , December 2010 and October 2015 ), from which constantly Alexander Lukashenko , is accused his country dictatorially to rule, emerged victorious. With the exception of the first, none of them met democratic standards. If no candidate achieves an absolute majority in the first ballot , a runoff would be necessary. However, this has never been the case before.

Detention of opposition activists and protests before the election

Lukashenka played down the COVID-19 pandemic in Belarus since it began and allowed mass events to take place without precautionary measures. It is estimated that almost 62,000 people were infected in Belarus by the end of June and almost 68,000 by the end of July. This - and the ongoing economic weakness in the country - have given the opposition an enormous influx, which has expanded into larger mass protests. The authorities tried to ban the demonstrations and rallies by the opposition; some of them used violence against them. Hundreds of participants were arrested. The four most promising candidates who wanted to compete against the incumbent Lukashenka were not admitted to the 2020 election and some were arrested, although they had collected hundreds of thousands of supporters' signatures in advance. This includes:

Statkewitsch and Zichanouski were arrested in advance and could therefore not submit their candidacy. Criminal proceedings against Babaryka began in June for alleged money laundering; Zapkala's signatures on the support lists were not recognized. After Zichanouski's arrest, his wife Svyatlana Zichanouskaya announced that she would run for election. Several thousand people came to her first campaign appearance on July 19 in Minsk . The wives of the arrested candidates Babaryka and Zapkala soon joined her. Lukashenka claimed that Belarus was not yet ripe for a woman at the top. Zichanouskaja had already reported in June that she had been threatened that she would be arrested and that her children would be taken away if she continued to campaign. She then sent her children to her grandmother abroad. Other opposition candidates had previously been deprived of custody of their children and were instead sent to state orphanages .

At a government-organized rally on August 6th, DJs Kiryl Halanau and Uladzislau Sakalouski played the unannounced song We are waiting for changes by Wiktor Zoi , which is considered the unofficial anthem of the 1980s freedom movement. The crowd began to sing along, but security forces stepped in, ended the concert and arrested both DJs. They were sentenced to 10 days in prison on an urgent basis.

In addition, 33 suspected mercenaries of the Russian paramilitary Wagner group were arrested in Minsk, which regularly conducts covert operations for a Russian secret service. Lukashenka then accused Russia of wanting to militarily destabilize Belarus. So far he has been considered a close ally of Putin . However , this ratio has worsened since the war in Ukraine in 2014 , according to observers. The media reported that Lukashenka feared that Russia might try to annex and depose Belarus next. In fact, an agreement signed by him has existed since 1997, which provides for a merger of the two countries. However, Lukashenka distanced himself from it.

On August 14th, the mercenaries of the Wagner group were released and transferred to Russia .

The coverage of the election was restricted: More than 100 representatives of international media had not received accreditation. Reporters Without Borders counted at least 40 journalists arrested on the weekend of the election. Including a correspondent for Deutsche Welle who had been sentenced to ten days in prison.

According to Spiegel , journalists were sometimes unable to report live via video transmission before the election; Telephone connections have also collapsed. On election day, opposition Telegram channels reported that YouTube and other websites were barely accessible. Encrypted VPN connections would not work either.

App development as an attempt at election observation by the opposition

Oppositionists developed an app that allowed voters to submit a photo of the ballot after registering. Around one million users, around a ninth of the Belarusian population, had registered with the app. The developer of the app and at least six opposition election observers were arrested and officially arrested for resisting the police and sentenced to six to twelve days in prison. The opposition had previously wanted to file a lawsuit because they had observed inaccuracies.

The Central Election Commission has approved five candidates for election:

The polling stations were used to vote a few days before election day. Students and state officials were asked to vote before the actual election day. According to critics, this was done to prepare for election fraud . The opposition called for protests on election day.

Independent election observers discovered over 2,000 violations of the electoral principles on August 4, the first day of the early election period: For example, voters were prevented from entering the polling stations, ballot boxes were not sealed and curtains were removed from voting booths. Some election observers were subsequently arrested. In general, observation of the election was severely limited; therefore the OSCE did not even come. Since 1995, the OSCE has not recognized any election in Belarus as free and fair. A leaked video, which allegedly shows the training of election workers , even lists the final results of the election that were determined in advance.

Also due to the exclusion of promising opposing candidates in advance, some commentators considered the election “neither free nor fair” even before election day.

According to the Belarusian state media, incumbent Lukashenka is said to have received 79 percent of the votes according to by-election surveys, while the most promising opponent Zichanouskaya received 6.9 percent of the votes. Independent observers and the opposition consider these figures to be fake and therefore not meaningful. Svyatlana Zichanouskaja declared herself the winner of the election.

The overall percentage results of the candidates as well as the voter turnout in the individual oblasts were published on the day after the election. The concrete total number of votes for the respective applicants was announced on August 14th. Broken down according to oblasts or electoral areas, there are no results so far.

All four opposition candidates appealed against the results to the Belarusian Election Commission, which was rejected.

After the election: mass protests and abuse by the authorities 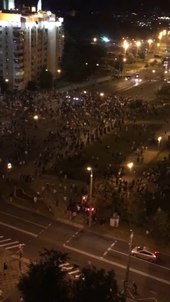 Human chains on the roadside show bouquets of flowers on August 14; Cars passing by honk in solidarity

Protests in Minsk on August 16
→ Main article : Protests in Belarus 2020

Following the announcement of the provisional official result that incumbent Lukashenka had won the election by far, mass protests against election fraud broke out in numerous cities in Belarus on election evening. In Minsk, where around 100,000 people took to the streets, the police used stun grenades , among other things , and several people were arrested and injured. One person died. Armed soldiers marched up; numerous websites, messenger services and VPN servers were no longer accessible, and street lights were switched off. Over 3,000 people were arrested that night alone, around 1,000 of them in Minsk. Protests took place in around 30 cities across the country.

The day after the election, the incumbent Lukashenka was declared the winner by the election authorities. Zichanouskaja had previously announced on the evening of the election that it would not recognize the election result. On August 11th, she fled to Lithuania. She had previously been arrested and allegedly forced to give a video message.

There have been repeated protests since August 9th. On the night of August 10th, thousands of people again marched through Minsk and other cities. Another protester was killed. A total of around 6,700 demonstrators were arrested by the police; Torture has also been reported.

On August 13, 2020, a nationwide general strike broke out in several state-owned companies.

On the night of August 14, 2020, the government said it had released almost 1,000 detainees who had been arbitrarily arrested on the sidelines of demonstrations in the days before; According to reports, there were also numerous bystanders among them. The Belarus Ministry of Interior denied the mistreatment of prisoners.

Protests broke out on August 16, 2020, including in the capital Minsk. It is estimated that around 200,000 demonstrators took part in the protest march. About 3,000 people took part in a demonstration for Lukashenka; Many were reportedly brought to the capital by buses from other cities; some civil servants said they had been forced to pledge allegiance to Lukashenka.

On August 17, 2020, Lukashenka gave a speech during a visit to a government agency that was once loyal to the regime, but was also booed there.

Lukashenka, who otherwise always rejected new elections, proposed a constitutional amendment for the first time on August 17, 2020, which should be brought about by a referendum that would also enable new elections. However, he also reiterated what he believed to be a victory in the presidential election and rejected reforms due to street pressure.

On August 18, 2020, the Coordination Council , initiated by the opposition around Svyatlana Zichanouskaja , presented itself to prepare a peaceful transfer of power. According to a deputy of Zichanouskaja, the peaceful change of power is the only goal of the group. After the political prisoners had been released, the group wanted to begin concrete negotiations on the transfer of power. Once that happened, the Coordinating Council would cease to exist. The body consists of opposition politicians, chairmen of the strike committees of Belarusian companies and well-known intellectuals like Svetlana Alexievich , winner of the Nobel Prize for Literature .

Also on August 18, Lukashenka had the Belarusian armed forces on the borders with Poland, Ukraine and Lithuania put into combat readiness and maneuvers on the grounds of foreign influence.

Many Western states, on the other hand, expressed concern about developments in Belarus and strongly condemned the violence; including all EU member states , the USA, Canada, Switzerland and Great Britain. Luxembourg Foreign Minister Jean Asselborn spoke of " state terrorism ". Chancellor Angela Merkel was shocked by the events. The EU asked for the prisoners to be released. The foreign ministers of the EU member states decided on 14 August 2020 an unscheduled conference sanctions against managers who are responsible for the violence against protesters and for falsifying the election results.

Amnesty International assessed the frequent mistreatment of those arrested as systematic torture ordered by the Belarusian leadership.

On August 17, 2020, EU Council President Charles Michel called a special Belarus summit of European heads of state and government for August 19, 2020 due to the situation. He said that the people of Belarus have the right to choose their future and freely choose their leadership.

On August 19, 2020, the member states of the European Union declared that they would not recognize the election result.

Elections in the Republic of Belarus