Border between Ukraine and Belarus

The border between Ukraine and Belarus is a land border in Eastern Europe . It runs between the south of Belarus and the north-west of Ukraine .

Border between Ukraine and Belarus

The 1084 km long border begins at the border triangle Belarus-Poland-Ukraine on the bank of the Western Bug near the Polish city of Włodawa . It then runs roughly in an east-west direction through the historical landscape of Polesia in the area of ​​the Pripyat Marshes and through forests radioactively contaminated after the Chernobyl nuclear disaster to the confluence of the Dnieper into the Kiev reservoir . The Dnepr, which from here is the border river between the countries for a length of about 120 kilometers, the border follows upstream in a north-easterly direction. After the border at Lojeu leaves the Dnepr, the border runs over a distance of around 25 kilometers, over the Dnepr tributary Sosch to the village of Skytok and from there, for the last 100 kilometers, back to the east to the triangle of Russia -Ukraine-Belarus to, where it ends southeast of Homel at Senkiwka .

As early as 1569, the Union of Lublin , which founded the aristocratic republic of Poland-Lithuania , established roughly the same border line when dividing the Grand Duchy of Lithuania and the Kingdom of Poland . (→ see map on the right)

The current border was established in September 1939, after the occupation of eastern Poland by the Soviet Union , which added the conquered areas of western Belarus to the Belarusian SSR and western Ukraine to the Ukrainian SSR , as the border between these union republics.

After the collapse of the Soviet Union , the Belarusian SSR was formed into the independent Belarus and the Ukrainian SSR into the independent Ukraine while maintaining its previous borders. In the Treaty on Friendship, Good Neighborhood and Cooperation concluded between the two states on June 17, 1995 , the inviolability of the state borders between them was confirmed and recognized and mutual territorial claims were waived, also in the future. On May 12, 1997, a state border agreement was signed between Belarus and Ukraine, which was ratified that same year by the Ukrainian Verkhovna Rada and in 2010 by the National Assembly of Belarus. On June 18, 2013, the parties exchanged instruments of ratification. 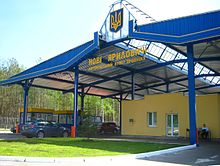 The border regions of the two countries are partially contaminated as a result of radioactive fallout after the Chernobyl nuclear disaster .

In the south of Belarus the following regions are on the border with Ukraine (from west to east):

In the north of Ukraine, the following regions are on the border with Belarus (from west to east):