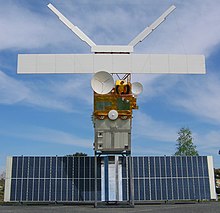 The first (military) earth observation satellites were the keyhole satellites of the Corona program in 1959 . The first successful flight of a Discoverer satellite (Corona program) took place on August 10, 1960. On April 1, 1960, TIROS -1, the first experimental weather satellite, was launched. In 1972, Landsat -1 introduced digital data acquisition using the MSS (Multispectral Scanner). In 1975 the first radar altimeter was used on GEOS-3 . The 1978 Seasat mission tested the synthetic aperture radar and a radiation scatter meter. The multispectral line scanner Coastal Zone Color Scanner on Nimbus-7 , the first environmental monitoring satellite, was specially designed for observing the color of the oceans . The successors of this instrument are SeaWiFS and MODIS on Aqua. MERIS on Envisat also has the same research tasks.

The earth observation satellites work with both passive and active sensors. Passive measurement methods are so called because the light or heat energy emitted by the earth or clouds is measured. The passive sensors mainly include optical sensors. In addition to visible light, they record different spectral ranges (IR, UV). The so-called atmospheric windows are used; these are wavelength ranges in which the permeability of the atmosphere is particularly high.

Another important measurement method is active remote sensing using radar, lidar or other technologies. It provides precise values ​​for the surface structure of the earth. The measuring accuracy is in the range of a few centimeters and thus makes it possible to measure the slightest earth displacement. The advantage of this method is that it is independent of any cloud cover (radar beams penetrate it unaffected). This active radar data can be used to generate 3-D models of the earth's surface.