After graduating from the University of Evansville , Sloan was selected fourth in the 1965 NBA draft by the Baltimore Bullets . After a year he moved to his hometown club, the Chicago Bulls , as a result of the Expansion Draft . Sloan was one of the first Bulls players. This fact also gives Sloan the nickname "The Original Bull". There he played until his career end in 1976. During this time Sloan was considered one of the best defenders in the league and was called up in 1967 and 1969 in the NBA All-Star Game . Several appointments to the NBA All-Defensive Team followed . During his eleven-year professional career, Sloan scored 14.0 points, 7.4 rebounds , and 2.5 assists per game. In his honor, the Bulls withdrew his jersey number 4 and have not given it to other players since then.

After completing his playing career, Sloan was first scout of the Chicago Bulls before he was promoted to assistant coach and then from 1979 to 1982 head coach of the Bulls. However, he was fired after a disappointing third season start. Sloan switched to Utah Jazz in 1984 and became an assistant coach under Frank Layden . In 1988 Sloan took over from Layden as head coach of Jazz.

Sloan formed the team around Karl Malone and John Stockton into a title contender, but it wasn't until 1997 that they made it to the NBA finals. There you lost to Michael Jordan's Chicago Bulls. The following year both teams met again, with the same result. The Stockton-Malone era in Utah ended in 2003 when Stockton announced his resignation and Malone joined the Los Angeles Lakers . Sloan stayed in Utah and was about to start over. But surprisingly, Jazz almost made it to the playoffs in 2004. Sloan was almost named “Coach of the Year” for this performance, but was narrowly defeated by Hubie Brown in the vote . Despite a rebuilding of the team and the resulting lack of success, the jazz continued to hold on to Sloan. With the engagements of Carlos Boozer and Deron Williams , Sloan and Jazz reached the playoffs again in 2007.

On April 6, 2009, Sloan was inducted into the Naismith Memorial Basketball Hall of Fame with Michael Jordan, David Robinson, and John Stockton . Sloan is one of the most successful coaches in NBA history with more than 1,000 wins. In 18 of his 23 years of coaching, Jazz moved into the playoffs. After a series of losses during the 2010-11 season , Sloan resigned as head coach of the Utah Jazz in February 2011 after a loss to the Chicago Bulls. His successor was his assistant coach and former jazz player Tyrone Corbin . 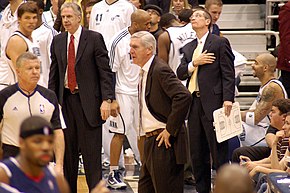 During the summer of 2013 there was repeated speculation about Sloan's return as a coach to the Portland Trail Blazers , but this did not come true. Sloan instead returned to jazz in a smaller role. Here he took on tasks in player development and consulting. On January 31, 2014, the Jazz honored Sloan with a banner with the number 1223. The number 1223 is the sum of all season and playoff victories that Sloan has won with the Jazz.

In April 2016, Sloan announced in an interview with the Salt Lake Tribune that he had Parkinson's disease and Lewy body dementia . Sloan died on May 22, 2020 at the age of 78 as a result of his longstanding illness.