The title of this article is ambiguous. For other namesake see: Werner Böhm (disambiguation) . 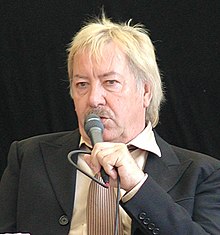 Werner Böhm (born June 5, 1941 in Thorn , Reichsgau Danzig-West Prussia , German Reich ; † June 2, 2020 in Gran Canaria ) was a German singer and musician . He recorded his greatest successes with his fictional character Gottlieb Wendehals in the 1980s, and in 1981 he had a number one hit with Polonäse Blankenese .

From the end of the 1950s to the beginning of the 1960s, Werner Böhm was a pianist with the "Cabinet Jazzmen" in Hamburg, which at the time were one of the most popular jazz bands in northern Germany. There he replaced the band's first pianist, Kaschi Jöhnck, who had emigrated to San Diego, California. He had already performed in Germany at the age of 16. After his apprenticeship as an upholsterer, he earned his living as a department store decorator. From 1970 to 1971 he was a jazz pianist in Hamburg, among other places in the “Jazz House” (“Knuds”), “Riverkasematten”, “Logo”, “Dennis Swing Club”, “Cotton Club”, “Remter” and the legendary " Onkel Pö " of the Hamburg scene . During these years, Böhm accompanied great musicians such as Louis Armstrong , Ella Fitzgerald and Erroll Garner on the grand piano .

At the end of 1974 Böhm started a career as an independent musician, lyricist and composer and founded the "Werner Böhm Quintet" with the "devil's violinist" Lonzo Westphal , Udo Lindenberg on drums, on bass Hans-Otto Mertens (manager of Otto Waalkes ), vocals Knut Kiesewetter and Werner Böhm on piano and vibraphone .

In 1979 he created the stage character Gottlieb Wendehals, a lanky, somewhat "dumb" jester with a North German regional lecture , pomadized center parting, black and white checked jacket, tattered briefcase and a rubber chicken under his arm. In this manner, he recorded various fun titles, of which Herbert (1980) and the Polonäse Blankenese (1981) made it into the German top 10 , the latter stayed in first place for nine weeks. At the height of his fame in 1982 Werner Böhm worked alongside Karl Dall and Helga Feddersen in the erotic outfit Sunshine Reggae on Ibiza . From 1985 he traveled with fourteen musicians as the "Gottlieb Wendehals Band" through Europe.

In 1982 he took part in the German preliminary decision for the Eurovision Song Contest . With The Earwig he reached eleventh and penultimate place. With the song Lady (sixth place), which his then wife Mary Roos performed together with David Hanselmann , he was also involved as a composer and lyricist (in collaboration with Michael Chambosse ).

In 1984 Böhm tried to change direction in music. The album 84 Ahead was stylistically based on Italo Disco , Disco and Rap . Böhm sang in English on the album. The tracks Get On Up and I'm a Winner were released as a single. With Get On Up he performed on May 3, 1984 in the music store . The album and the singles did not have any commercial success. As a result, 84 Ahead was given up and Böhm stepped up again as Gottlieb Wendehals .

In 1990 Böhm published a number of songs in the style of popular hits . But he could not build on his successes as Gottlieb Wendehals . Under his real name, he took part in the first season of the television show I'm a Star - Get Me Out of Here! part. In September 2005 he moved into the house of the television program Big Brother for a week . There the alcoholic Boehm had a relapse. In December 2014 he was a candidate for the talent show Das Supertalent . In the summer of 2015 he took part in the show I'm a Star - Let me back in! part and fought together with 26 other candidates for a place in the jungle camp 2016.

Although he had as a musician, a million dollar income, had Bohm mid-1990s personal bankruptcy login with 600,000 euros of debt. The reason is his "inability to deal with money". Since then he has lived on the "back burner". In 2008 there was another personal bankruptcy.

On September 26, 2006, Böhm opened the “Wendehals” restaurant in the Hamburg district of Sasel , but it was closed again after a few weeks.

In the Hamburg state election in 2008 , he ran for second place in the list of the Center Party .

At the beginning of 2020, Böhm moved from Hamburg to Gran Canaria, where he died in June a few days before his 79th birthday. He will be buried at sea.

Der Spiegel wrote in the obituary : “The life of the singer Werner Böhm, who was behind the masquerade, was also marked by defeats. Böhm often drank more than was good for him and spent more money than he had. He talked openly about both. Attempts to leave Wendehne behind failed. "

Werner Böhm as a producer