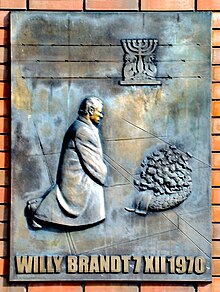 Bronze plaque on the monument to the kneeling

The prostration of Warsaw on 7 December 1970, a gesture of humility during the by Chancellor Willy Brandt operated and his government Ostpolitik at the memorial to the dead of the Warsaw Ghetto . It was a gesture of forgiveness for the German crimes of World War II .

The event and its immediate effect

The monument to the heroes of the ghetto, in front of whom the Chancellor knelt

As Federal Chancellor of the Federal Republic of Germany, Willy Brandt laid a wreath on December 7, 1970 immediately before the Warsaw Treaty between Poland and the Federal Republic of Germany was signed at the Memorial of the Heroes of the Ghetto  (picture) in Warsaw . After straightening the wreath loop, he did not stand up as usual, but sank to his knees and remained in silence for about half a minute.

Hermann Schreiber , who was present, wrote a week later in the news magazine Der Spiegel :

“If this non-religious man, who was not jointly responsible for the crime and who was not there at the time, now makes his way through the former Warsaw ghetto on his own initiative and kneels down there - then he is not kneeling for his sake. Then he kneels, who does not need it, there for all those who need it but do not kneel there - because they do not dare or cannot or cannot dare. Then he confesses to a debt that he himself does not have to bear and asks for forgiveness that he himself does not need. Then he kneels there for Germany. "

The expression of humility came as a surprise: for the delegation, the hosts and the public. Internationally, it was understood as a request for forgiveness and a symbol of Ostpolitik , for which Willy Brandt was awarded the Nobel Peace Prize in 1971 . In the Federal Republic of Germany it also met with rejection - not least from within the ranks of the CDU ; Günter Grass even spoke of the "hatred [...] that was consciously stirred up by political opponents". According to a Spiegel survey at the time, 48 percent of West Germans found the kneeling excessive, 41 percent appropriate, and 11 percent had no opinion. The GDR press did not mention the gesture.

How surprised and worried Brandt's friends were about the effect in Germany is also reflected in a text that Günter Grass wrote five days later:

“How will you report about it at home? Will the tendency to slander subliminally find nourishment and bend one's knees into kowtowing? But all the signs - astonished, shocked, embarrassed - showed concern. (Similar to the Polish hosts: they thought they knew German behavior; this was new to them. The word 'Israel' was muted. A remnant of anti-Semitism may also have felt recognized in its anti-Zionist disguise.) "

In retrospect, it is agreed that the knee-fall played an important role in the relaxation between blocks. The Warsaw Treaty , signed on the same day, recognized the inviolability of the Oder-Neisse border . Prime Minister Józef Cyrankiewicz (1911–1989), a survivor of Auschwitz, signed for Poland .

Much has been speculated about whether Brandt acted spontaneously. He himself wrote in his memoirs published in 1989 :

“I was asked again and again what this gesture was all about. Had it been planned? No, it wasn't. My close co-workers were no less surprised than those reporters and photographers who stood next to me and those who stayed away from the scene because they did not expect "new things". […] I hadn't planned anything, but left Wilanow Castle , where I was staying , feeling that I had to express the specialty of the memorial at the ghetto monument. At the abyss of German history and under the burden of millions of murdered people, I did what people do when the language fails. "

Egon Bahr expressed himself as follows in his memoirs In My Time 1996:

“When the motorcade sets off for the Ghetto Memorial, Berthold Beitz and I compare our impressions. We get out of the car in peace and are not in a hurry to approach the dense crowd of journalists and photographers - suddenly it becomes very quiet. It is seldom that this hardened folk fall silent. As I approach, someone whispers: "He's kneeling." I only saw the picture when it went around the world. I also shied away from asking my friend over the last whiskey that evening. That someone who, free from historical guilt, confessed the historical guilt of his people, was a thought, but big words between us were unusual. "I had the feeling that tilting my head is not enough."

Walter Scheel wrote in a letter to the Solinger Tageblatt in 2010 :

“The moment we got out and stepped in front of the memorial, the mood was very overwhelming. Suddenly Willy Brandt sank to his knees and everyone who was present would have wanted to do the same and everyone found this gesture, this completely unplanned and spontaneous gesture, to be unique and impressive. [...] It was one of those skills of Willy Brandt that I valued so much in him: to address people emotionally and to set clear signals for everyone. I have not seen a politician who would have been comparable. "

On December 7, 2010, at the invitation of the Friedrich-Ebert-Stiftung , Federal President Christian Wulff and Polish President Bronisław Komorowski gave speeches in Warsaw on the 40th anniversary of the knee-fall on its importance and that of the Warsaw Treaty for German-Polish reconciliation and put on wreaths Monument to the Warsaw Uprising and at the Monument to the Heroes of the Warsaw Ghetto.

The writer Navid Kermani said at the ceremony "65 Years of the Basic Law" on May 23, 2014 in the Bundestag:

“Because when and how did Germany, which was suspicious of its militarism in the 19th century and seem completely dishonored with the murder of 6 million Jews, when and how did it regain its dignity? If I wanted to name a single day, a single event, a single gesture for which the word 'dignity' seems appropriate in German post-war history, then it was […] the kneeling of Warsaw. " 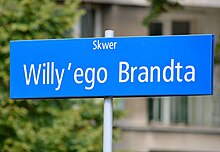 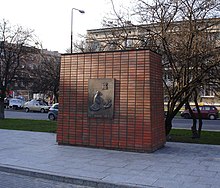 About 150 meters northwest of the memorial and visible from there until the Museum of the History of Polish Jews was built, a brick memorial with a bronze plaque by Wiktoria Czechowska Antoniewska was erected in 2000 to the kneeling. The area around this monument is now officially called Skwer Willy'ego Brandta (Willy-Brandt-Platz).

In the 1970 chapter of his collection of short stories, My Century, Günter Grass has a journalist who hates the "Kniefallkanzler" and Egon Bahr argue in an internal monologue about what he should write now. The eyewitness “must reluctantly bless where he wanted and should curse; [...] [he has to] reluctantly pay respect to one of the greatest gestures of German post-war politics «.

In 2012/2013 the sculpture Him (Praying Hitler) by the Italian sculptor Maurizio Cattelan was exhibited in a doorway of the Warsaw ghetto . The art journalist Axel Hecht related the sculpture to Brandt's knee, among other things.