Fifth assessment report by the IPCC

The reports of the IPCC regularly summarize the current state of scientific knowledge about the influence of mankind on the earth system ( anthropogenic influence) and the resulting feedback (natural influence). Climate change plays a major role here, i.e. the projected consequences of changed Earth system parameters such as the global mean surface temperature or the amount of precipitation . The current AR5 provides the basis for most environmental and climate-related decisions for the international community.

The sixth assessment report of the IPCC will be prepared from 2017.

The progress reports of the IPCC

The main task of the committee is to compile the scientific basis and the global state of research on the effects of climate change and its risks as well as mitigation and adaptation strategies and to evaluate them from a scientific point of view. To this end, the IPCC appoints thousands of scientists from all over the world. These create the “status reports” of the IPCC. So far, the IPCC has published five status reports and more than ten special reports as well as guidelines for the preparation of greenhouse gas inventories .

Publication of the AR5

The summary ( Summary for Policymakers ) of the results of Working Group I ( The Physical Science Basis ) for the fifth world climate report was published on September 27, 2013; a final draft ( Final Draft ) of the full report on September 30, 2013, the editorial edited final version on January 30, 2014.

The presentation of the summary of the report by Working Group II ( Impacts, Adaptation and Vulnerability ) on March 31, 2014 in Yokohama was accompanied by an urgent appeal by the chairman of the IPCC, Rajendra Pachauri , for more climate protection and broad media coverage. The German federal government reaffirmed the climate target of reducing CO 2 emissions by 40 percent by 2020 compared to 1990 levels.

The report of Working Group III ( Mitigation of Climate Change ) was presented on April 13, 2014 at a press conference in Berlin. The Summary For Policymakers was published parallel to the press conference , the Technical Summary and the individual detailed chapters followed on April 15, 2015.

The synthesis report was published on November 2, 2014. In total, more than 830 scientists were directly involved as authors of the 5th assessment report , and several thousand researchers also took part in the scientific assessment of the report.

The report of Working Group I comprises 2216 pages and consists of a comprehensive technical summary (127 pages), an introduction, thirteen content chapters and three appendices. The Summary for Policymakers is 36 pages long and includes an introduction and the sections “Observed changes in the climate system”, “Drivers of climate change”, “Understanding the climate system and its current changes”, “Future global and regional climate changes”. The current UN climate report is based on the Fourth Assessment Report, into which new results have been incorporated. 9,200 peer-reviewed studies are cited in the bibliography .

To understand the attributes used in the following as likely , great confidence , etc. See Article treatment of uncertainties in the IPCC process .

Observed changes in the climate system

A warming of the climate system is clear: the atmosphere and the ocean have become warmer, snow and ice have decreased, the sea level and the concentration of carbon dioxide in the atmosphere have increased. Changes with strength since the 1950s have not yet occurred on time scales from decades to millennia.

The radiative forcing of the climate system has increased by 2.29 watts / m² compared to the year 1750; atmospheric CO₂ makes up the largest part of this . 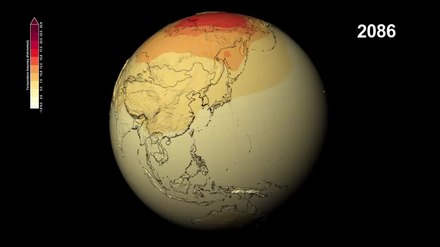 Play media file
The NASA video shows temperature and precipitation simulations for the 21st century. It is based on the four CO₂ concentration paths of the 5th assessment report with the increase in the CO₂ content in the air to 421  ppm ( RCP 2.6 ), 538 ppm (RCP 4.5), 670 ppm (RCP 6.0) and 936 ppm (RCP 8.5) up to the year 2100. The color differences show the change in the average temperature of the individual years compared to the globally observed temperature changes of the years 1971–2000. (in HD , English)

The further release of greenhouse gases will lead to further global warming and the associated changes to the climate system. The estimation of future climate change based (Engl. On the use of climate models on four concentration paths representative concentration pathways (RCPs), " representative concentration pathways "). These represent the results of new emission scenarios, including, for the first time, a scenario that takes ambitious climate protection measures into account (RCP 2.6). The paths are named after the change in radiative forcing which, compared to the state in 1750, would go hand in hand with them by about 2100: RCP 2.6 - change in radiative forcing 2.6 W / m², RCP 4.5 - 4.5 W / m² , RCP 6.0 - 6 W / m² and RCP 8.5 - 8.5 W / m².

Understanding the climate system and its current changes

Observations, investigations of feedback and simulations with climate models contribute to our understanding of the climate system.

The new climate simulations, on which the statements about future climate changes in the AR5 are essentially based, were partially carried out in the Coupled Model Intercomparison Project Phase 5 ( CMIP5 ), an international collaboration of the Climate Model Community. The 2009 publication A Summary of the CMIP5 Experiment Design describes the details of the coordinated experiments.

This section is still missing important information. Help Wikipedia by researching and pasting it .

According to Working Group I, human interventions in the climate system lead to climate change. This represents a risk for human and natural systems. The contribution of Working Group II examines how patterns of risks and potential benefits change through climate change, how climate change-related consequences and risks can be managed through adaptations and climate protection.

This section is still missing important information. Help Wikipedia by researching and pasting it .

Although Working Group III includes authors from different disciplines and schools, the central parts of the report are shaped by a neoclassical-economic perspective. Some authors who belonged to Working Group III of the IPCC, such as Matthew Paterson from the University of Ottawa, criticize that such a view is not in a position to think about the abrupt social changes that climate change brings with it or makes necessary.