Destruction in the port of Beirut after the explosion

The explosion in Beirut occurred on August 4, 2020 at 6:08 p.m. local time (17:08 CEST) in the port of Beirut on the Golfe de Saint-Georges and catastrophically hit the entire city. The cause was a fire that exploded 2,750 tons of ammonium nitrate in a port storage facility. The German Federal Institute for Geosciences and Raw Materials estimated the explosive power at 500 to 1,100 tons of TNT equivalent . The explosion destroyed parts of the port and caused damage to large parts of the city. According to the Lebanese government, at least 220 people were killed and more than 6,000 injured.

As a result of the explosion, there were mass protests against the Lebanese government (see Protests in Lebanon 2019-20 ), which the demonstrators hold responsible for the economic and political crisis in the country. Prime Minister Hassan Diab's government resigned six days after the explosion .

The harbor in 2005. The origin of the explosion was directly behind the bright granary on the pier , in the upper center of the picture.

The Rhosus in the port of Beirut in October 2017

In November 2013, the Moldovan coaster Rhosus - loaded with ammonium nitrate produced by the Georgian chemical company Rustavi Azot in Rustawi - was en route from Batumi ( Georgia ) to Beira ( Mozambique ). The client was the Mozambican bank Millennium bim , which had ordered the goods for the Fábrica de Explosivos de Moçambique explosives factory . Since the Russian ship owner Igor Grechushkin, who lives in Cyprus , did not have enough money to pay for the passage through the Suez Canal , the captain was instructed to call at the port of the Lebanese capital, Beirut , in order to load more cargo. There were also technical problems on board, including a small leak that meant that water had to be pumped out regularly. The Lebanese authorities deemed the ship unseaworthy and arrested it. Both the owner Igor Grechushkin and the client bank then lost interest in the Rhosus and gave up the ship in 2014. The Rhosus was confiscated by the Lebanese authorities on February 4, 2014 because of outstanding claims . The last crew members of the Rhosus - the Russian captain and three Ukrainian crew members - were only allowed to leave the ship and the country in September 2014 after a court decision. According to the master's statement, the ammonium nitrate was still on board at this time.

Due to the high risk of explosion, the Lebanese authorities ordered the freighter to be unloaded, whereupon the ammonium nitrate was transported to warehouse number 12 in the port between September 2014 and October 2015. According to the New York Times , the seized ship sank in early 2018 on the pier in the port of Beirut, where it had been moored since 2015. The Lebanese customs authorities asked the Lebanese judiciary at least six times between June 2014 and October 2017 to decide how to deal with the stored ammonium nitrate. Due to the climatic conditions in the port, the customs authorities issued a letter warning against further storage of the chemicals there and suggested several approaches, including exporting them abroad, selling them to Lebanese explosives manufacturers and handing them over to the Lebanese military .

The port eleven days after the disaster, on August 15th

On August 4, 2020, shortly before 6 p.m. local time, a fire and subsequent smaller explosions spread in a warehouse in the port. The exact cause has not yet been fully clarified. According to a report by the Lebanese television broadcaster LBCI , the fire probably broke out due to flying sparks during welding work . This initially ignited a load of fireworks stored nearby . As was officially confirmed, this fire then spread to 2,750 tons of ammonium nitrate, which were probably stored in the same hall .

The fire brigade arrived shortly after the fire broke out, but the fire continued to spread. After about 15 minutes there was a first explosion. After about half a minute a detonation followed , which caused a shock wave in a hemispherically spreading Wilson cloud and finally developed a mushroom cloud . The detonation occurred during rush hour and destroyed large parts of the port and many surrounding buildings. Experts confirmed that the ammonium nitrate explains the size of the explosion and the reddish color of the smoke.

The detonation was for 15:08 UTC by the American seismological station of the USGS with a magnitude of 3.3 M L registered. The German Research Center for Geosciences compared the tremors to a magnitude 3.5 earthquake. However, the effect is not directly comparable to that of earthquakes, since the detonation occurred on the surface, where seismic waves are not as strong as in earthquakes. The Jordanian According to seismological the vibrations correspond to an earthquake magnitude of 4.5 M L . The shock of the explosion was also felt in the northern district of Israel, around 50 kilometers away, and in Cyprus , 240 kilometers away .

Video recordings taken at a sufficient distance from the explosion site show how the shock wave is first perceived as a spreading cloud and ground vibrations before the shock wave was also transmitted through the air.

Apartment destroyed by the explosion 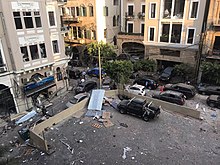 Damage in Remeil , about a kilometer from the explosion

According to the Lebanese government, at least 220 people died in the disaster and more than 6,000 were injured. Seven days after the explosion, around 110 people were still reported missing in this context.

The hospitals in Beirut were overloaded with the onslaught of injured people. Among the injured are members of the United Nations peacekeeping forces who were stationed in ships at the port as members of the UNIFIL observer mission . Among the dead are the general secretary of the Kata'ib party, Nazar Najarian , and the Gambian-Lebanese businessman George S. Madi . An employee of the German embassy was also killed in her apartment.

The pressure wave of the explosion also caused immense material damage: In addition to cars being thrown away and buildings destroyed in the vicinity, even houses several kilometers away were severely damaged. Video recordings show devastated parts of the city. The pressure wave also burst windows 20 kilometers away. All the laboriously made stained glass windows of the Evangelical National Church were destroyed. At the site of the explosion, the detonation left a crater 140 meters wide and 40 meters deep. Three hospitals were evacuated because they had been badly damaged or destroyed. According to a WHO study , more than half of the city's 55 hospitals and health centers are inoperable. The UNESCO announced that about 8,000 buildings were damaged by the explosion, including 640 historic buildings, of which 60 are in danger of collapsing. According to the Beirut office of the Konrad Adenauer Foundation , the power station in Beirut was also destroyed. According to reports from the Lebanese news agency National News Agency , around 90% of the hotels in Beirut were damaged. The Sursock Museum and its exhibits and the building of the Armenian Apostolic Catholicate of Cilicia were severely damaged in some cases. Between 200,000 and 300,000 people are said to have become homeless. According to initial estimates, the amount of property damage caused by the disaster is up to five billion . US dollars (just under 4.25 billion euros).

The cruise ship Orient Queen (formerly Vistamar ) lying in the port of Beirut was badly damaged by the explosion and capsized the following day. At least two crew members were killed. The approximately 50 meter long Amadeo II tanker was washed onto the quayside by the explosion .

At the explosion site, a large were granary and the quays and extinguishing spaces for grain imports. The store and the grain elevator were largely destroyed in the explosion and the 15,000 tons of grain stocks were contaminated. Lebanon, which has been affected by a severe food and economic crisis since 2019 , imports over 80 percent of the grain consumed in the country, especially the wheat from which the typical flatbread is made. As a result of the disaster, food supplies will only last for just under a month, according to a government official. According to Hapag-Lloyd and CMA CGM, the port or its container terminal could still be accessed again just seven days after the explosion. The partially destroyed trading port of the Lebanese capital is one of the most important transshipment points in Lebanon. Around 85 percent of all goods in Lebanon were imported in the past.

Regarding the situation of the COVID-19 pandemic in Lebanon , significant increases in the number of infections were noted after the incident. The hospitals were overloaded and an ongoing lockdown was suspended.

As a result of the mass protests that followed, the Lebanese government, which the demonstrators held responsible for the economic and political crisis in the country, resigned under Prime Minister Hassan Diab on August 10, 2020 (see Protests in Lebanon 2019-20 ).

A Dutch team for urban search and rescue missions at Eindhoven Airport during boarding for the mission in Beirut on August 5th, 2020

The United Nations World Food Program announced deliveries of flour and grain as well as other aid. Several states expressed their condolences and offered or announced support. A donor conference raised more than 250 million euros. The European Union contributed 63 million euros. Israel , too , officially at war with neighboring Lebanon since the state was founded (see Arab-Israeli wars ), offered help. Rumors that the Israeli military could be responsible for the explosion have been denied not only by Israel but also by Hezbollah .

The Lebanese government asked for international aid after the disaster. The EU civil protection mechanism was activated. In the days that followed, several states began to send specially trained rescue teams to Beirut for city operations and aid and supplies.

The German federal government sent a team of around 50 helpers from the SEEBA of the technical relief organization . The Bundeswehr has sent a medical investigation team and the corvette Ludwigshafen to Beirut, and the Federal Foreign Office has provided the German Red Cross with financial support for disaster relief in Lebanon. The aid organizations @fire Internationaler Katastrophenschutz Deutschland and ISAR Germany were also deployed.

Lebanese law enforcement placed the Beirut port officials responsible for storage and security under temporary house arrest . After further questioning, 16 people were arrested, including port and customs officials as well as people who were responsible or involved in the maintenance work on the exploded warehouse. On August 17, 2020, after a 4.5-hour questioning of the port's head of customs, Badri Dahir, a judge issued the - first - arrest warrant against him.

With at least forty injured among the victims of the explosion and one French citizen killed, the prosecution in Paris has opened a criminal investigation into negligent bodily harm and manslaughter. The General Directorate of the National Gendarmerie was entrusted with the investigation .