The Hapag-Lloyd AG is a transport and logistics company with headquarters in Hamburg .

Company headquarters on Ballindamm in Hamburg

From the foundation to the present

On September 1, 1970, Hapag-Lloyd AG (HLAG) was created through a merger of the two traditional shipping companies Hamburg-American Packetfahrt-Actien-Gesellschaft (HAPAG) in Hamburg and Norddeutscher Lloyd (NDL) in Bremen . HAPAG was founded in 1847 and Norddeutsche Lloyd in 1857.

Before the First World War, the network of routes operated by Hapag and North German Lloyd spanned the entire globe. Both companies suffered the total loss of their fleets as a result of the First and Second World War . In the respective post-war years, however, they managed to rebuild their fleets and continue operations. In view of the boom in container traffic that began at the end of the 1960s , the two companies merged to form Hapag-Lloyd AG in 1970 .

In 1981 HLAG put the world's largest container ship , the Frankfurt Express , into service with a  capacity of 3,045 TEU .

In February 1991, the trio consortium agreement was ended and instead a cooperation with the Japanese shipping companies Nippon Yusen Kaisha (NYK) and Mitsui OSK Lines started. In 1996, the Grand Alliance consortium (made up of NYK , Neptune Orient Lines (NOL) and Hapag-Lloyd) began operating in the East Asian business , and after being expanded to include British P & OCL, it became one of the leading providers of liner shipping in the region .

In 1997, Hapag-Lloyd presented the Kobe Express as the first ship in the London Express class , and in 2001 the Hamburg Express as the first of four new container ships in the Hamburg Express class , later renamed the Dalian Express class, with a capacity of each 7500 TEU in service. The fourth ship in this class, the Berlin Express, followed two years later . In 2001, the company also took a 25.1% stake in the Altenwerder container terminal (CTA) in Hamburg .

In 1997, 99.2% of Hapag-Lloyd was taken over by what was then Preussag . In 1998, Hapag-Lloyd increased its stake in what was then TUI from 30% to 50.1%, whereupon the tourism divisions of the groups were merged into the Hapag Touristik Union (HTU). In addition to TUI, this also included the airline and travel agencies of Hapag-Lloyd. In 2000, the HTU was renamed the TUI Group , which was absorbed directly into the parent company Preussag in 2001. The complete takeover of Hapag-Lloyd by Preussag was completed in August 2002. As early as June 2002, the general meeting decided to rename Preussag to TUI AG .

On August 21, 2005, the parent company TUI announced that it would take over the British-Canadian shipping company CP Ships for 1.7 billion euros . The shareholders of CP Ships agreed to the merger on 14 December 2005 after the management of the company a sell recommendation had already expressed, the acquisition was finally completed on 20 December of 2005. A capital increase by TUI of one billion euros was necessary for the takeover. As a result of the merger, which went hand in hand with further expansion of the Hapag-Lloyd ship fleet and the route network, the company rose to number 5 in the global container shipping industry.

In March 2008 it became known that the parent company TUI wanted to sell its container shipping business, and thus Hapag-Lloyd AG , in order to concentrate on its originally own core business of tourism. According to press reports at the time, interested parties for a takeover included a Hamburg investor group led by Kuehne + Nagel owner Klaus-Michael Kühne and the personally liable partner of the bank MM Warburg Christian Olearius , as well as the shipping company Neptune Orient Lines (NOL) in Singapore . After the bidding process ended on July 21, 2008, the Hamburg investor group and NOL initially submitted non-binding bids , which TUI reportedly described as "disappointing" in terms of content.

On October 10, 2008, NOL withdrew its offer in the wake of the global financial crisis and the press assumed a future “Hamburg solution”. Just two days later, the TUI Supervisory Board met on this subject in order to buy the company Hapag-Lloyd together with the consortium Albert Ballin - whose spiritus rector and negotiator was Wolfgang Peiner - (but without Hapag-Lloyd Kreuzfahrten GmbH , which not was more part of Hapag-Lloyd AG and should also remain in the TUI Group), valued at 4.45 billion euros before net liabilities at the time. The Hamburg consortium was to pay 1.4 billion euros for two thirds of the shares in the company.

Due to the global financial crisis that started at the same time, Klaus-Michael Kühne was forced to reduce his originally planned indirect share. As a result, the TUI Group itself retained 43.3% and the consortium only took over 56.7%. In addition, TUI supported the shipping company with a credit line of one billion euros. Due to the continuing financial crisis and the associated lower transport volume, an austerity program was launched that already included around 745 million euros in savings in 2009 and was further expanded over the next few years. In addition to the financial injections from the owners, the federal government and the city of Hamburg approved a default guarantee for 90% of a loan in the amount of 1.2 billion euros as part of the economic stimulus package II in autumn 2009.

TUI was given the right to offer its share to the Albert Ballin consortium in 2012 . The Hamburg merchants for their part held a right of first refusal . On September 22, 2011, TUI announced that Hapag-Lloyd would return the unused federal-state guarantee and place a new 500 million dollar bond - with the stated aim of refinancing the full sale of the Working towards the shipping company. As agreed, the Albert Ballin consortium was dissolved at the end of September 2013.

On March 28, 2012, the Hamburg citizenship approved with the votes of the parties SPD and Die Linke 420 million euros for a further share purchase in the shipping company. This made the city of Hamburg the largest single shareholder in Hapag-Lloyd AG via HGV with 36.9% .

At the turn of the year 2012/2013, a merger with the shipping company Hamburg Süd was under discussion, but this failed.

At the beginning of 2014, Hapag-Lloyd and the Chilean shipping company Compañía Sud Americana de Vapores (CSAV) signed a letter of intent for a partial merger of the two companies, on April 16, 2014, a binding contract. After approval from all relevant competition authorities in December 2014, Hapag-Lloyd took over the container business of CSAV, which in return received 30% of the shares in Hapag-Lloyd. With around 200 ships and a total transport capacity of approx. 1 million  TEU , Hapag-Lloyd rose to become the world's fourth largest liner shipping company after Maersk , MSC and CMA CGM . After a capital increase of 370 million euros, in which CSAV participated with 259 million euros and Kühne Maritime with 111 million euros, at the end of 2014 CSAV (34.0%), HGV (23.2%), Kühne Maritime (20th , 8%) and TUI (13.9%) are the largest shareholders of Hapag-Lloyd.

In May 2016 "The Alliance" was founded with Nippon Yūsen , “K” Line , Yang Ming Line , Hanjin Shipping and Mitsui OSK Lines , which started operations in April 2017.

From April 2016 it was announced that Hapag-Lloyd was negotiating a merger with the United Arab Shipping Company ( UASC ). The merger was completed in May 2017. Hapag-Lloyd took over UASC including the entire fleet, while UASC's shareholders received 28% of the shares in Hapag-Lloyd. After the merger, Hapag-Lloyd's fleet consisted of 225 ships with a total transport capacity of 1.6 million TEU. At the end of March 2020, the Kühne-Holding subsidiary Kühne Maritim took over a 30% stake in Hapag-Lloyd. 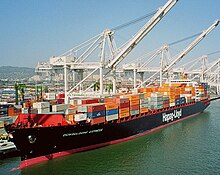 Container ship in the Port of Oakland, California

New to the cargo ship fleet since the merger with UASC :

As of March 2020, the most important shareholders are: