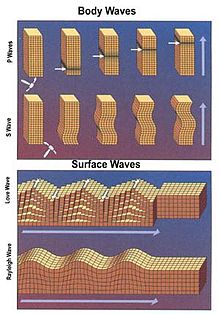 Seismic waves , also called earthquake waves , are caused by the focus process during an earthquake and spread from there in all directions; on their way through the earth's interior , these waves can be refracted , reflected , bent , scattered , absorbed and transformed.

The speed of propagation of seismic waves depends on the type of wave and on the density and elasticity of the material through which the waves pass. They therefore spread in parts of the earth's crust , the earth's mantle and the earth's core at different speeds, from 2 km / s to over 8 km / s.

Seismographic stations record the waves according to frequency and amplitude in seismograms ; their comparison, analysis and interpretation is the subject of geophysical science, seismology or seismics . In addition to the phenomena naturally caused by earthquakes , the courses of seismic waves artificially caused by explosions or vibrations are also examined. They allow conclusions to be drawn about the structure and nature of the earth, a better understanding of the processes inside the earth and an improved earthquake warning.

Thereafter, whether seismic waves propagate in the interior of the earth or on its surface, can in principle be body waves (English body waves ) and surface acoustic wave (engl. Surface waves ) are different. Further differences arise from the type of oscillation, whether its plane is longitudinal or transverse to the direction of propagation or what shape the particle movement has. 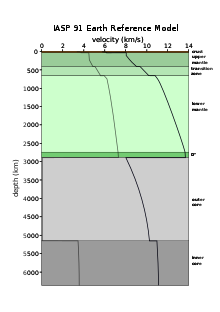 The names of the primary waves ( P waves ) and secondary waves ( S waves ) described below refer to the fact that the former propagate faster: At a location away from the quake focus , the P waves are recorded first and only later the S waves. The distance to the hearth can be calculated from the time difference between the arrival of the P and the S waves, their transit time difference . If the distance has been determined in at least three different locations in this way, the approximate location of the hypocenter can be specified within the scope of the measurement accuracy. The geographic location above it on the earth's surface is called the epicenter .

The P waves , short for primary waves , are longitudinal waves , ie they oscillate in the direction of propagation. They can spread in solid rock, but also in liquids such as water or the quasi-liquid parts of the earth's interior. These are compression waves (also: pressure waves or compression waves), similar to the sound waves in air or water.

The speed of propagation of the P waves can be calculated using the following formula:

wherein K the bulk modulus , the shear modulus and the density is of material through which the wave propagates.

The S waves or secondary waves oscillate across the direction of propagation ( transverse wave ). Since they lead to the shearing of the propagation medium, they are also called shear waves. S waves can propagate in solids, but not in liquids or gases, since the latter two have no (significant) shear resistance. One can therefore identify liquid areas in the earth's interior by the fact that there are no S waves running there.

The speed of propagation of the S waves is calculated using the following formula:

With typical values ​​of the elastic constants within the earth, the S waves have speeds of 3000 to 4000 m / s in the earth's crust and around 4500 m / s in the upper mantle. In the lower mantle the speed continues to increase (see diagram of the IASP91 model in the figure). There are no shear waves in the liquid outer core of the earth.

In addition to the P and S waves as space waves, there are surface waves . They arise because P or S waves are broken into the earth's surface. As with the S waves, the particle movement or vibration occurs perpendicular to the direction of propagation. However, they are characterized by the fact that they run on the surface and that the amplitudes of the waves decrease with depth. The energy of the surface waves also only decreases by a factor of 1 / r with the distance r, not by a factor of 1 / r 2 like that of the sky waves (in each case neglecting the attenuation). The surface waves propagate in vertical and horizontal oscillations.

The Love waves were named after the British mathematician AEH Love , who in 1911 was the first to set up a mathematical model for the propagation of these waves. They are the fastest surface waves, spreading at around 2000–4400 m / s (depending primarily on the frequency and thus the depth of penetration into the earth's crust), but more slowly than the S waves. The ground movement takes place in the horizontal direction, perpendicular to the direction of propagation.

The Rayleigh waves were named after Lord Rayleigh , who had mathematically proven the existence of these waves in 1885 before they were even observed. In Rayleigh waves, the ground rolls in an elliptical motion similar to ocean waves. On a homogeneous half-space the polarization is always retrograde, ie the rolling movement takes place against the direction of propagation of the Rayleigh wave. In the general case, prograde polarized Rayleigh waves also occur. This rolling moves the ground up and down as well as back and forth in the direction of propagation of the wave. The speed of propagation is around 2000–4000 m / s, depending primarily on the wavelength. Most of the vibrations felt in an earthquake are usually Rayleigh waves, the amplitudes of which can be much larger than those of the other types of waves. The destructive effect of earthquakes is therefore largely due to this type of wave.

Scholte waves are interfacial waves that propagate along the "liquid-solid" interface, for example on the sea floor. Like the Rayleigh waves, they are of the P-SV type. This means that they are elliptically polarized in the radial-vertical plane. If the subsurface is stratified, the Scholtewave is dispersive , ie it has frequency-dependent propagation speeds. In addition to the fundamental mode (with a fundamental frequency ), higher-order modes ( harmonics ) are also formed.

Propagation in the interior of the earth 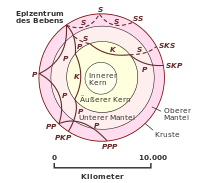 Propagation of seismic waves in the interior of the earth

The propagation of space waves in the earth's interior is usually described with a ray approximation as in geometric optics . According to Snellius' law of refraction , a seismic wave is refracted “away from the perpendicular” with increasing propagation speed, and with decreasing “towards the perpendicular”. In the interior of the earth, the speed of propagation changes with increasing depth, both continuously and - at discontinuities - abruptly. The spatial variation of the speed of propagation can largely be recorded using a purely radially symmetrical earth model (such as the IASP91 reference model). A typical course can therefore be specified for seismic waves, which can be seen in the profile as an arc (see illustration). The seismic phases shown in the figure are named according to the sections of their path (P: propagation as compression wave, S: propagation as shear wave, K: propagation as compression wave in the liquid outer core of the earth).