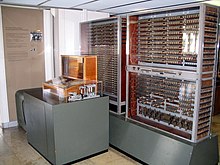 Replica of the Zuse Z3 , the first functional digital computer

Digital computers (English digit , number, from the Latin digitum , finger) are computers that perform their calculations on the basis of discrete number representations (mostly in binary form). Thus, all of the personal computers in use today are digital computers.

Today most digital computers work on an electronic basis. But others are also possible, for example on a mechanical, pneumatic and optical basis.

The term is often used to differentiate between analog computers that represent numbers analog (non-discrete). A calculated value is represented as electrical voltage or current and the calculation is carried out using suitable circuits. Therefore, analog computers are generally not programmable.

The following important information is missing from this article or section:
The entire technical development is missing
Help Wikipedia by researching and pasting it .

Finger arithmetic is the oldest calculation method. You can not only count with your fingers, you can also calculate. Very high numerical values ​​can be displayed with the fingers and hands. The first digital calculator is the abacus, which comes in various forms: calculating table, calculating table, counting frame (spherical calculator), calculating cloth. Like finger counting, abacus counting has survived in certain areas to this day. The best-known ball calculators were the Chinese, Japanese and Russian abacus. Other digital computers are relay, tube and transistor computers, as well as mechanical calculating machines such as the Curta.