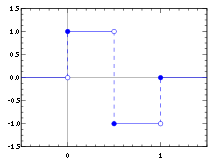 The Haar wavelet is the first wavelet to become known in literature and was introduced by Alfréd Haar in 1909 . It is also the simplest known wavelet and can be formed from the combination of two rectangular functions .

The functions of the Haar wavelet basis

It satisfies the functional equation

The wavelet function is the "pushed together" difference between two successive scaling functions:

The notation with a prefactor ensures that the matrix

is an orthogonal matrix . This is part of the conditions that orthogonal wavelets require.

This function generates the multi-scale analysis of the step functions. In this, each function with "finite energy" is assigned the following projection on each scale :

The difference between two scales can then be expressed by the "mother wavelet" or the actual wavelet function:

With and as functions in the Hilbert space applies

A discrete signal f is given , which is given by a finite or square summable sequence

is shown. The staircase function is to him as a continuous signal

A vector-valued signal, the so-called polyphase decomposition, is generated from the discrete signal by placing it vertically in pairs:

This is now multiplied by the hair transformation matrix

We get a mean value signal and a difference signal, from which the output signal can be recovered by simply reversing the steps taken:

As a discrete signal a real sequence is mostly about looking with finite energy,

Among these there are some very simple sequences δ n , called Kronecker or Dirac delta, one for each . , Applies to their followers that the respective th the value has , and all the value , if .

or as the sum of two rows

In many practically relevant signal classes, e.g. B. with oversampled band-limited continuous signals, values ​​of adjacent sequence members are also adjacent, ie generally lie and close together, relative to their absolute value. However, this is not taken into account at all in the above series. The mean value and difference of and would express their similarity more strongly, the mean value is similar to both values ​​and the difference is small. Let's use identity

Now we are introducing new names:

We thus obtain the decomposition of the Haar wavelet transform

The last three identities describe a "Conjugate Quadrature Filterbank (CQF)" , which can also be defined for more general basic sequences and . The basic sequences are all created by shifting around the respective out , those through shifting out . More on this in the article Daubechies wavelets .

The sequence now contains a smoothed version of the output signal at half the sampling rate , so you can also decompose according to this rule and continue this procedure recursively over a certain depth. The tuples are thus successively generated from an output signal

If finite , i.e. almost everywhere zero, with length , then the consequences in the decomposition essentially have, i. H. except for additive constants, the lengths

so that the total number of essential coefficients is preserved. The consequences in the decomposition are usually better suited for further processing such as compression or the search for certain features than the raw output signal.

The polyphase decomposition of the output signal can also take place in a block size s other than 2; the corresponding Haar matrix must be required to be an orthogonal matrix and that its first line consists only of entries . This requirement is met by the matrices of the discrete cosine transformation and that of the Walsh-Hadamard transformation .

The Haar wavelet transformation corresponds to a discrete cosine transformation to the block size , which is applied in the image = pixel rectangle one after the other in the horizontal and vertical direction.