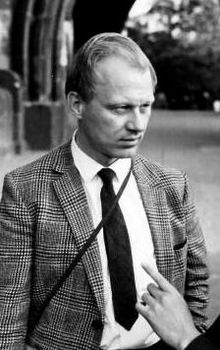 Jürgen Kurt Moser (born July 4, 1928 in Königsberg in East Prussia , † December 17, 1999 in Zurich ) was a German-American-Swiss mathematician . His research area was analysis , where he mainly worked in the field of differential equations and the theory of dynamic systems .

Jürgen Moser's father Kurt Moser was a neurologist in Königsberg , his mother was the housewife and pianist Ilse Strehlke. Like David Hilbert before him , he attended the Wilhelms-Gymnasium in his hometown and in 1943, like many other students, was assigned to the flak, where he was assigned to calculate bullet trajectories. During the siege of the city, the students were used for defense and only three of his class survived. His older brother Friedel died in Russia in 1945 . After the war, the family lived as refugees in Stralsund . Moser succeeded in enrolling in Göttingen in 1947 . His teachers included Franz Rellich , with whom he received his doctorate in 1952, and Carl Ludwig Siegel , whose lectures on celestial mechanics he developed into a monograph as Siegel's assistant in 1954/55, which was later published under both names.

In 1955 he went as an assistant professor at the Courant Institute affiliated with New York University to Richard Courant , the former successor of Felix Klein in Göttingen, who had been expelled from Germany , after he had been there as a Fulbright scholar in 1953/54. Moser was at MIT from 1957 and then from 1960 professor at the Courant Institute, of which he was director from 1967 to 1970. He became an American citizen in 1959.

In 1980 he went to the ETH Zurich , where he was director of the Research Institute for Mathematics from 1982 to 1995. In 1995 he retired and took on Swiss citizenship.

After suffering for several years, he died of prostate cancer in the University Hospital Zurich in 1999 .

Moser is best known for his contributions to the KAM theory , named after Andrei Kolmogorow , Wladimir Arnold and him , which has its origin in the perturbation theory of the multi-body problem in celestial mechanics . The main result of the theory are statements about the existence of stable tori in phase space , around which the bodies move quasi-periodically in the event of small disturbances . He made many other important contributions especially to the theory of partial differential equations (the Nash-Moser theory , according to him and John Nash named), the theory of integrable systems , and complex analysis of several variables, where in cooperation with he Shiing-Shen Chern , the Chern-Moser introduced invariants of real hypersurfaces and studied with Sidney Webster isolated complex points of real surfaces of codimension two in complex two-dimensional space . In addition, the Moser inequality and the Moser lemma are named after him.

He was President of the International Mathematical Union from 1983 to 1986 , received the first George David Birkhoff Prize for Applied Mathematics in 1968 , the Brouwer Medal in 1984 , the Cantor Medal in 1992 , and the Wolf Prize in 1995 . In 1961 he was a Sloan Fellow and in 1964 he was elected to the American Academy of Arts and Sciences . In 1971 he became a member of the US National Academy of Sciences . Most recently he was actively involved in setting up the Max Planck Institute for Mathematics in the Natural Sciences in Leipzig . He was John von Neumann Lecturer at SIAM and Gibbs Lecturer at American Mathematical Society . In 1962 and 1978 he gave section lectures at the International Congress of Mathematicians in Stockholm ( New results on the stability of periodic motions ) and Helsinki ( The holomorphic equivalence of real hypersurfaces ), and in 1998 he gave a plenary lecture at the International Congress of Mathematicians in Berlin ( Dynamical Systems: past and present ). In 1982 he was elected a member of the Leopoldina . Since 1994 he has been a foreign member of the Russian Academy of Sciences and since 1995 of the Académie des Sciences .

Jürgen Moser was a passionate piano and cello player and hobby astronomer. His wife Gertrude was Richard Courant's daughter and Carl Runge's granddaughter , whom he met in New York. They had two daughters, Nina Moser and Lucy Moser-Jauslin. In 1988 he learned how to hang gliding while visiting the Instituto Nacional de Matematica Pura e Aplicada in Rio de Janeiro . According to his wishes, he was buried in the air by a hang glider near Braunwald in the canton of Glarus .

Winner of the Wolf Prize in Mathematics