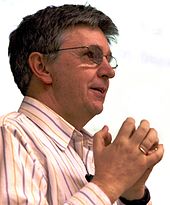 László Lovász (born March 9, 1948 in Budapest ) is a Hungarian mathematician who is best known for his work in the field of combinatorics and graph theory .

László Lovász received his doctorate in 1971 under Tibor Gallai at the Loránd Eötvös University (ELTE) in Budapest . From 1971 to 1975 he was a research assistant at ELTE, from 1975 to 1978 lecturer at the József Attila University in Szeged . He then held the chair for geometry until 1982. Then he returned to Budapest and took over the chair of computer science at ELTE, which he held from 1983 to 1993. In 1993 László Lovász went to the USA, where he worked as a professor at Yale University from 1993 to 2000 and for Microsoft Research from 1999 to 2006 . In 2006 he returned to Budapest and became director of the Mathematical Institute of ELTE. He also held visiting professorships at Vanderbilt University (1972/72), the University of Waterloo (1978/79), the University of Bonn (1984/85), the University of Chicago (1985) and Cornell University (1985) and is Honorary professor at the Research Institute for Discrete Mathematics at the University of Bonn. From 2007 to 2010 he was President of the International Mathematical Union (IMU) and is represented on the board from 2011 to 2014 as Ex Officio. In May 2014 he was elected President of the Hungarian Academy of Sciences for three years and re-elected in 2017.

With the (g, f) -factor theorem , László Lovász provided an important generalization of Tutte's f-factor theorem in 1970 . In 1972 he then proved the so-called weak conjecture for perfect graphs , which has since been referred to as the perfect graph theorem or Lovász's theorem . In 1975 he proved the Lovász-Local-Lemma named after him .

Together with Arjen Lenstra and Hendrik Lenstra, he is the inventor of the LLL algorithm for reducing the basis of grids with applications, for example in cryptography.

For his work in the field of discrete mathematics Lovász received the Wolf Prize and the Knuth Prize in 1999 . In 2006 he received the John von Neumann Theory Prize . In 1990 he gave a plenary lecture at the ICM in Kyōto (Geometric Algorithms and Algorithmic Geometry) and in 1983 he was invited speaker at the ICM in Warsaw (Algorithmic aspects of combinatorics, geometry and number theory) . In 1993 he received the Brouwer Medal . In 2008 he gave a plenary lecture at the European Congress of Mathematicians in Amsterdam (Very large graphs) . In 2010 he was awarded the Kyoto Prize , in 2012 the Fulkerson Prize and in 2017 the Béla Szőkefalvi Nagy Medal . In 2002 he was elected to the Leopoldina . In 1991 he was accepted as a full member of the Academia Europaea . He has been an honorary member of the London Mathematical Society since 2009 and a Fellow of the American Mathematical Society since 2012 . He has been a member of the Russian and Royal Netherlands Academy of Sciences since 2006, of the Royal Swedish Academy of Sciences since 2007 and of the National Academy of Sciences since 2012 . The North Rhine-Westphalian Academy of Sciences it belongs since 1993 as a corresponding member. He is an honorary doctor from several universities.

Winner of the Wolf Prize in Mathematics