The North Rhine-Westphalian Academy of Sciences and Arts is one of the scientific academies in Germany . It belongs to the Union of German Academies of Science . 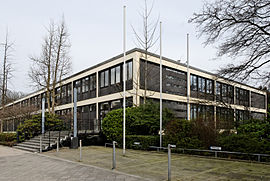 Headquarters of the Karl-Arnold-Haus Academy (2011)

The first idea of ​​founding a general society of learned people arose in 1815. At the beginning of the 20th century, a "Rhenish Society for Scientific Research" was founded, which from 1911 to 1915 promoted a large number of scientific projects.

The First World War brought this society to an early end. After the end of the Second World War, the then Prime Minister Karl Arnold founded the "Working Group for Research of the State of North Rhine-Westphalia" in 1950 at the suggestion of Ministerial Director Leo Brandt . The purpose of the amalgamation of scientific and technical disciplines was to advise the state government on the reconstruction of the country that was badly damaged by the war.

In the following years, the working group assumed an advisory role for the state government in the field of research and thus also had an influence on research policy. Research facilities were created and scientifically supervised, For example, the Jülich nuclear research facility , the German Research Institute for Aviation , the Society for Mathematics and Data Processing and the Institute for Silicosis Diseases. In 1952, the working group, which essentially represents today's class for natural sciences and medicine, was expanded to include a class for humanities. In order to take into account the great importance of engineering, the engineering and economics class was added in 2000.

The classes are the actual bearers of the Academy's work. This includes the lecture program, scientific meetings, the academy's own publication series as well as specialist statements and events. The classes can set up commissions for the scientific supervision of research projects. In addition to the central commission for projects in the humanities class and the joint central commission for projects in the natural sciences and medicine class and the engineering and economics class, the following commissions have been set up:

The current president has been the Bonn lawyer Wolfgang Löwer since January 1, 2016 . He was elected for a three-year term. Vice-presidents of the academy are from the class for engineering and economics Andreas Pfingsten , from the class for natural sciences and medicine Dieter Häussinger and Peter Michael Lynen from the class for arts.

A special feature of the North Rhine-Westphalian Academy is the board of trustees. The Academy's board of trustees was headed by the former Prime Minister of North Rhine-Westphalia, Hannelore Kraft , and the former Minister of Science Svenja Schulze acted as her deputy . The Board of Trustees also includes the President of the Academy, the secretaries of the four classes and two public figures. These members are Udo Oels and Verena Kulenkampff . The personal composition of the board of trustees is intended to institutionalize contact with government agencies and at the same time enable connections to public circles.

The North Rhine-Westphalian Academy of Sciences and Arts awards: