The phase space describes the set of all possible states of a dynamic system . A state is clearly represented by a point in the phase space. In mechanics it consists of generalized coordinates ( configuration space ) and associated generalized speeds (see principle of virtual power ).

Construction of a phase (space) portrait for a mathematical pendulum

For systems with up to three variables, the phase space can be displayed graphically. For two variables in particular, the movement (trajectories, phase space flow as a vector field ) can be clearly represented in a phase space portrait or phase portrait and analyzed qualitatively ( phase space analysis , zero lines and fixed points ).

The historical origin of the use of phase spaces is often traced back to Joseph Liouville - because of the Liouville theorem (1838) that in conservative systems (with energy conservation) the phase space volume of neighboring trajectories is constant over time. However, Liouville did not have a mechanical system in mind, but proved the theorem for general, ordinary differential equations of the first order; the connection to mechanics was first suggested by Carl Gustav Jacobi . The phase space concept emerged only after the geometers had switched to the consideration of higher-dimensional spaces in the further course of the 19th century and the first use of phase space in today's sense was by Ludwig Boltzmann in 1872 as part of his investigations into statistical mechanics , which was adopted by James Clerk Maxwell in 1879 has been. The concept was then used in the lectures by Boltzmann and Josiah Willard Gibbs on statistical mechanics, in the article on statistical mechanics in the Encyclopedia of Mathematical Sciences from 1911 by Paul Ehrenfest and Tatjana Ehrenfest (who introduced the term for the phase space) and in qualitative Theory of differential equations by Henri Poincaré .

A dynamic system, the trajectories of which fill the entire phase space, i.e. come as close as desired to any point in the phase space, is called ergodic , see also ergodic hypothesis . In conservative mechanical systems (closed systems), according to Liouville's theorem, the phase space volume of neighboring trajectories is constant over time, in dissipative systems it decreases (open systems).

Example of a phase space analysis 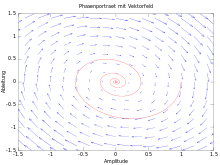 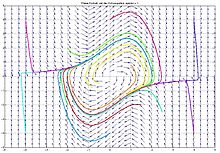 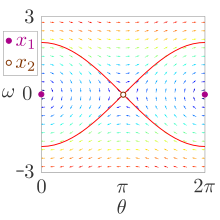 Phase space of a plane pendulum with the angle on the x-axis and the angular velocity on the y-axis. The phase space is periodic with period with respect to the angle . The fixed point is stable, the fixed point is unstable. The separatrix, which separates the area of ​​the "back and forth" pendulum movements (circular movement around the stable fixed point) from the upper and lower area of ​​the continuous right and left rotations, is shown as a red line.

The phase space portrait gives the opportunity to graphically analyze the development of dynamic systems over time. For this, only the dynamic equations of the system are required; an explicit representation of the time development, e.g. by analytically solving a differential equation, is not necessary.

As an example, some elements of phase space analysis in a two-dimensional system , which are defined by the differential equations ( , )