In set theory , a branch of mathematics , a finite set is a set with finitely many elements . Such is the amount, for example

a finite set with four elements. The empty set has no elements according to their definition d. H. is the number of elements, so it is also considered a finite set. The cardinality or cardinality, written for a set , of a finite set, is identified with a natural number (including zero ). For example, one then writes to express that it consists of four elements.

A set that is not finite is called an infinite set . 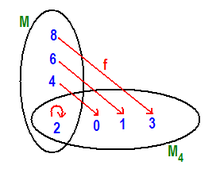 between and the set of all natural numbers less than exists.

In particular, the empty set is finite, since a bijection between and the empty set (all natural numbers smaller than , such do not exist) trivially exists.

Such is the amount, for example

finally, as a bijection to the crowd

exists, see figure on the right.

With this enumerating quantity notation, the order does not matter. Furthermore, an element that is mentioned several times is only included once. So it is for example

For the set of all natural numbers

if there is no such bijection on a finite set, the set is therefore infinite.

Another distinction between finite and infinite sets comes from Dedekind . He defined:

A set is called finite if it is not of equal power to any real subset, otherwise infinite .

Today we speak of Dedekind finiteness or Dedekind infinity .

In order to show that every finite set is also Dedekind finite , it suffices to show the following:

Conversely, every Dedekind finite set is also finite, because if it were infinite, one could find a sequence of pairwise different elements with the help of the axiom of choice . The image

is well-defined , because if there is, then there is a with and this is clear. It shows that it is equal to the real subset and therefore not Dedekind finite - in contradiction to the prerequisite.

By definition, all hereditary finite sets are finite. The converse is not valid, for example it is a finite set, because it contains the only element , but the element itself is not finite.

In abstract set theory the natural numbers are introduced as hereditary finite sets:

The natural numbers themselves are finite sets, even hereditary finite, and it applies to every natural number , whereby the vertical lines here do not stand for the absolute value function , but for the power. This is the reason why the quantity was chosen instead of in the definition of uniformity in the introduction . The latter would also have been correct, but the choice made fits the definition of natural numbers better, according to which a set has power if it is too even.

The finiteness of a set can also be understood in terms of order theory. The concept of Tarski finitude, which goes back to Alfred Tarski , should be mentioned here in particular .