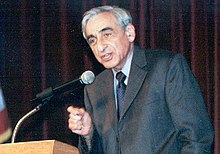 Michael Laban Walzer (born March 3, 1935 in New York City ) is an American social and moral philosopher and an eminent intellectual .

Michael Walzer, son of Jewish emigrants from Eastern Europe, is considered one of the most influential representatives of political philosophy in the United States. He has written widely recognized treatises on justice , civil society , social criticism and war . His works are also becoming increasingly important in the European debate. The main reason for this is his theory of the “just war”. Walzer was also known for his contributions to the debate on liberalism and communitarianism .

Walzer was born in New York City in 1935. In New York he also studied with Irving Howe at Brandeis University , where he obtained his BA in 1956. Walzer became Howe's assistant and began to work for the magazine Dissent , which he published, an organ of the anti-Stalinist left in America. After Howe's death, Walzer became editor of the magazine, which he still uses today in the spirit of its founder to examine and discuss left-wing positions.

After completing his studies, he was a Fulbright Fellow at Cambridge University for a year before receiving his Ph.D. from Harvard University in 1961. received. From 1962 to 1966 Walzer taught at Princeton University , from 1966 to 1980 at Harvard University. In 1971 he was elected to the American Academy of Arts and Sciences and in 1990 to the American Philosophical Society . Since 1980 he has been a professor at the School of Social Science at the Institute for Advanced Study in Princeton .

Michael Walzer is editor of Dissent and co-editor of Philosophy and Public Affairs , Political Theory, and The New Republic . In his contributions, Walzer combines elements of Jewish tradition with modern political thinking. Within America's “communitarian” scene, he is a prominent representative of a socially critical political theory.

Walzer belongs to a group of 58 leading American intellectuals, including the sociologist Francis Fukuyama ( The End of History and the last Man ), the cultural historian Samuel P. Huntington ( Clash of Civilizations ), and the social theorist Amitai Etzioni , who died on March 12, 2002 had published a manifesto for the "just war". The undersigned support the policy of the US government after the attacks of September 11, 2001 on the New York World Trade Center in principle, justified from a value-conservative standpoint .

In Germany, on May 19, 1998, Walzer received the Dr. Leopold Lucas Prize awarded by the Evangelical Theological Faculty of the Eberhard Karls University in Tübingen . In 2016 he was elected an external member of the British Academy .

Walzer dealt with the moral realities of war long before the historical shock of Sarajevo and Srebrenica . His book on Just and Unjust Wars , published in 1977, is now a classic. The doctrine of just war is about the “restriction of possible reasons, purposes and means of war”, ie “containment” instead of categorical avoidance of war.

In his theory of jus ad bellum, Walzer differentiates between wars of aggression and interventions. In the event of aggression, the attacked state has the right to defend itself and third countries can support it. In addition, a state has the right to defend itself preventively if an attack by another state is imminent (anticipation). A prerequisite for this, however, is a recognizable intention to attack, such as B. the stationing of soldiers in the border area. According to Walzer, the right to intervene exists in exactly three cases: (1) In the case of secession or national wars of liberation, i.e. when two or more political communities live within a territory, one of which is already involved in a military struggle for independence ( support for secession or national liberation ) (2) In the case of a counter-intervention, i.e. when another state has already intervened in a civil war ( counter-intervention ) and (3) In the case of slavery or massacres, when the violation of human rights within an area is so serious that this state no longer has self-determination ( humanitarian intervention ). These interventions are subject to certain rules and are intended to promote the values ​​of independence and community.

As early as 1967, Walzer defended the Israeli preventive attack in June 1967 against the Egyptian army ( six-day war ). He later campaigned for the intervention in Kosovo and the war against the Taliban. He only considered the war against Iraq to be unjustified, even though he had previously suggested a similar approach as an advisor to Clinton. when where? However, the rejection of the Iraq war, following the logic of his teaching, is not categorical either. Rather, he makes the assessment dependent on the development of the country after the end of the war.

In October 2016 he published together with Todd Gitlin , Peter Beinart , Edward Witten , Adam Hochschild u. a. an open letter in the New York Review of Books calling for a targeted boycott of Israeli settlements in the occupied territories .

Walzer presented a comprehensive theory on the philosophy of justice in 1983 with his work Spheres of Justice : a defense of pluralism and equality (German edition 1992: Sphären der Gerechtigkeit: a plea for plurality and equality ). Walzer assumes that human society is a distribution society that produces goods and distributes them among themselves. The community determines the value of the goods based on their common vision. It also lays down the principles according to which the individual goods are to be distributed. In order for this to be “just”, Walzer does not demand simple equality, but rather “complex equality”. He also wants to prevent the dominance of certain goods to ensure justice and prevent tyranny. This means: "No social good X of one sphere should be distributed to men and women who are in possession of a good Y of another sphere, regardless of its importance, solely because they have this Y." That is why he separates social life in spheres in which goods are distributed according to different principles.

There are eleven spheres: membership and belonging, security and welfare, money and goods, upbringing and education, recognition and political power, among others. A fair distribution requires that the various spheres of distribution are clearly delimited from one another and that all goods are allocated according to their social meanings and the specific criteria and standards of their own sphere. For example, medical services are to be awarded to sick people according to the need for treatment and political offices to candidates according to their qualifications. Three central distribution principles are: free exchange, merit and need. The former is the main criterion for the sphere of "money and goods", the latter for the sphere of "recognition", and the latter for the sphere of "security and welfare". Simple equality, according to Walzer, is ultimately unstable, while complex equality can prevent success in one area of ​​society from leading to success in another. For example, he calls for a strict separation of the areas of business and politics. The relative autonomy of the spheres is thus intended to ensure a fair distribution of goods. This theory shows a clear communitarian approach, as Walzer puts the community at the center, which determines the value of goods and their modes of distribution.