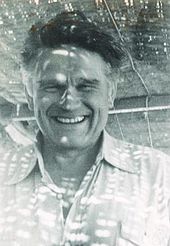 Faddejew at a lecture in Aarhus 2010

Faddeev's father Dmitri Faddejew (1907-1989) was a mathematics professor in Leningrad, a corresponding member of the Academy of Sciences of the USSR and a well-known algebraic , his mother Vera Faddejewa was also a well-known mathematician. Faddejew studied from 1951 at the University of Leningrad with Olga Ladyschenskaja (known for her work on partial differential equations of hydrodynamics ) and the physicist Vladimir Fock . He graduated in 1956, after obtaining his doctorate in 1959, he worked at the Steklov Institute in Leningrad, where he became a professor in 1969, was vice director from 1976 to 1987 and then director. He was also director of the International Mathematical Euler Institute, founded there in 1988.

Faddejew is best known for the introduction (with his colleague Viktor Nikolajewitsch Popow ) of Faddejew-Popow-Geistes for the treatment of the calibration degrees of freedom in Yang-Mills theories (non- Abelian calibration theories ). In the 1960s he introduced the Faddejew equations for the exact treatment of the three-body problem in quantum mechanics . From the 1970s onwards, he was primarily concerned with exactly solvable ("integrable") models of mathematical physics (keywords here are Yang - Baxter relations and the Bethe approach ), behind which the structure of quantum groups is often hidden . He was instrumental in clearing up these connections. In 1975 he developed a method for quantizing solitons. He also dealt with the mathematical treatment of the infrared problem in quantum electrodynamics and with the theory of magnetically confined plasmas .

In 1962 he was invited speaker at the ICM in Stockholm (Construction of the resolvent of the energy operator for a three particle system and the scattering problem) , in 1970 in Nice (Symplectic structure and quantization of the Einstein gravitation theory) and in 1978 at the ICM in Helsinki (Quantum theory of solitons) . In 2002 he gave a plenary lecture at the International Congress of Mathematicians in Beijing (Knotted Solitons).

Faddejew visited the theory department at CERN for the first time in 1973 and made several other visits.