This article does not deal with Klein's group of four , the smallest non-cyclic group, but special groups of Möbius transformations.

A Klein group is a discrete subgroup of , the isometric group of 3-dimensional hyperbolic space .

A Klein group is called

If is a torsion-free Klein group, then is a hyperbolic manifold . (It is the inner core of the Klein manifold to be associated.) 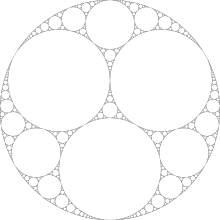 An example of a Limes set of a Klein group.

The Limes set or limit set of a Klein group is a subset of the Riemann sphere , defined as the intersection of the edge at infinity with the end of an orbit with a point of hyperbolic space. The definition of the limit amount is independent of the selected point .

If a Klein group is of the 2nd kind, then the hyperbolic manifold has infinite volume, in particular it is not compact.

The complement of the limit set in is the discontinuity area , it is the maximum subset of , on which actually discontinuous acts. The quotient

is a manifold with a boundary, it is called a Klein manifold .

A Klein group is called geometrically finite if it fulfills one of the following equivalent conditions:

A surface group is geometrically finite if and only if it is a quasi-fox group.