This article covers the city in Mali. For other meanings, see Gao (disambiguation) .

Gao ( Arabic : Kaukau ) is a city in Mali . From 2012 to January 26, 2013, it was the capital of the unrecognized Azawad state . On this day, French and Malian troops liberated the city, which has been occupied by Islamists since June 2012, as part of the Opération Serval .

Gao is famous for the red dune of Koyma, which is located directly in Gao on the other bank of the Niger. It is rather flat from the rear and falls steeply and directly into the Niger River on the front side. You can walk on it. It is one of the natural landmarks of Gao City.

As a junction of important trade routes, the city developed into a center of trade, especially the Trans-Saharan trade . 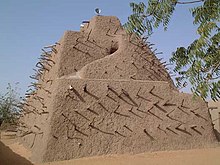 Gao was the capital of the Gao Empire , attested since the 9th century, and that of the Songha Empire in the 15th and 16th centuries . The tomb of Askia , which has been included in the world cultural heritage , is located here .

In November 2007, a series of attacks on the governor of the region and several other officials failed. Since then, the city has been considered endangered by rebel attacks.

On March 31, 2012, Tuareg fighters captured Gao, just like Kidal the day before . Gao was named capital of the new Azawad state after the National Movement for the Liberation of Azawad (MNLA) declared independence . On June 28, 2012, the MNLA was expelled from Gao by the Islamist rebel group Ansar Dine . Ansar Dine and the Movement for Unity and Jihad in West Africa (MUJAO) have since tried to enforce Sharia law in Gao . With the support of the French and the military from Niger and Chad, Malian soldiers recaptured the city of Gao from the Islamists on January 26, 2013. A management staff of the international peace mission MINUSMA, which will operate in Mali from July 2013, was set up in Gao with German participation .

On January 18, 2017, an attack on a military base carried out by five suicide bombers killed at least 55 people and injured 115 others. The terrorist organization al-Qaeda in the Islamic Maghreb (AQMI) claimed responsibility for the attack. The attack was carried out by fighters from the local Al-Qaida group Al Mourabitoun . UN Secretary General António Guterres called the attack a "horrific act". The determination of the United Nations to support Mali in the fight against terrorism and in the search for peace has been further strengthened. The German federal government condemned the attack as an attempt to sabotage the peace process in Mali.

The following overview shows the population by area since the 1976 census.

Gao is at the eastern end of National Road 15 and at the start of National Road 17, which connects to Niamey in Niger . The city is also the starting point of the Tanezrouft piste , a Transsahara route north to the Algerian border and on to Reggane . East of Gao is a small airport with the IATA code GAQ.

Northern Mali with Gao and Kidal is now a hub for drug smuggling from South America to Europe. This became apparent in November 2009. On November 5, 2009, a Boeing 727-230 (registration number J5-GCU ) landed on an illegal desert airport near Sinkrebaka in Mali . This should either be 200 km north of Gao or near Bourem , about 90 km north-northwest of Gao; a third source gives the place Tarkint, about 135 km north of Gao. Until 1992, when D-ABKP Lufthansa operated and then to Istanbul Airlines selling machine was owned by Africa Air Assistance from Dakar , Senegal, a subsidiary of the Spanish -based Málaga West African Aviation. It was registered in Guinea-Bissau , but was flown from Venezuela with a Nigerian crew. Many tons of cocaine are said to have been discharged after landing. According to one variant, the plane was set on fire after the drugs had been removed. According to another, the machine crashed on restart. The location of the burned-out wreck was reported by the United Nations Office on Drugs and Crime (UNODC).