A group ( Latin concernere '(to) mix' ) describes the merger of a controlling company and one or more dependent companies to form an economic unit under the management of the controlling company, with each company continuing to prepare its own annual financial statements . In return, the individual companies give up their economic and financial independence; the companies remain legally independent. The affiliated companies are called group companies . The group is distinguished from the cooperation , which regularly lacks a uniform management.

In business administration and commercial law , a group is understood to be a group of companies combined under the uniform management of a ruling company . Companies between which there is a domination agreement ( Section 291 AktG ) or of which one is integrated into the other ( Section 319 AktG) are under uniform management within the meaning of group law . A group consists of a parent company and one or more subsidiaries . The subsidiaries are economically and financially dependent on the parent company, but legally independent and prepare their own balance sheets and income statements , which are then merged ( consolidated ) in the consolidated balance sheet and income statement . The more divided a group is, the more often group levels are installed, each forming a subgroup . This is often led by a second-level subsidiary whose role is to manage multiple third-level subsidiaries.

The term group is of German origin and is also used in other German-speaking countries. In principle, however, it cannot always be translated with identical terms. In the English-speaking world, concern = "company, company" is common, but is considered a German import and is only used selectively. The “corporate group” or simply “group” is more common there.

Colloquially , a group is used - sometimes with a negative connotation - as a synonym for a "powerful large company ", even if it is not legally organized as a group.

The group of companies held by the Italian banker Cosimo de 'Medici is considered the world's first group . De 'Medici held majority stakes in 13 companies in 1458, all of which carried his name and that of a partner and remained legally independent. When the "Nobel Dynamite Trust Company Ltd." , founded in London in October 1886, was founded , according to today's understanding, it was a group-forming holding company . At that time, corporate connections in Germany were first referred to as “groups”, before individual companies dominated the economy. In the industrialized world, the isolated early corporations were referred to with all sorts of terms such as trust , combination, combine, syndicat , mixed work or fusion . In other linguistic areas, the German neologism “corporate group” did not prevail, so that competing formulations remained dominant. In the USA there is no uniform group term as in Germany, one speaks of "affiliated corporations", "affiliated groups", "groups of corporations", "integrated companies" or "corporate groups". Usually the term “corporation” is used as the most important component for a group structure, even if it is a group. 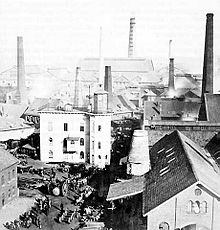 During the founding period , the first corporations were formed worldwide because of the enormous capital requirements of the economy. Larger companies bought up smaller ones and exercised control over them - the basis for today's group formation. From 1870 onwards, trusts were established in the USA , whose committee of trustees (the "Board of Trustees") dealt only with the administration of the shares in the companies controlled by it. After the Sherman Antitrust Act came into force in July 1890 and banned all trade-impairing trusts, this law was circumvented by the formation of holding companies . The most famous foundation in October 1889 was the “Standard Oil Company of New Jersey Holding” , the legal successor to the “Standard Oil Trust” that was established in January 1882 - the first known trust in American economic history. The "Securities Holding Company" bought just enough shares to have the critical number of votes to influence. The US state of New Jersey allowed a holding company for the first time in 1888, paving the way for corporations.

German corporate law began with corporate concentration, which began in 1864. When the capital of the Alfred Krupp cast steel factory in Essen expanded to include other companies in 1864, the first German group was formed, and Krupp became the “king of the guns”. Further corporations in Germany emerged as "syndicate companies" in the mining and potash industry . Here the companies remained economically independent, only subjecting themselves to restrictions in terms of production and sales. Hugo Stinnes , who bought a vast conglomerate under the Hugo Stinnes GmbH founded in 1892 , or AEG , which started its group activities in 1884 with the Städtische Elektrizitätswerke Berlin AG , and Siemens & Halske created other groups . As director of the “Actien-Gesellschaft Charlottenhütte ”, Friedrich Flick proposed in September 1915 that his company should be merged with the “Cöln-Müsener Bergwerks-Aktienverein”.

German group law subsequently emerged as an independent area of law in the Weimar Republic . In May 1913, the Reichsgericht (RG) had to deal with the question of whether a company contract concluded between two companies could be null and void due to the restriction of the commercial freedom of one company. For the first time , the case law had to deal with questions of group law, because one company exercised personnel sovereignty over the other. In this “Petroleum Judgment” the RG came to the conclusion that a company, like a natural person, cannot incapacitate itself.

A major impetus for the formation of a group was the tightened taxation of the merger in the new KStG of March 1920, the box privilege and the organ theory developed in sales tax law. Groups were formed, particularly in the fields of metallurgy , heavy industry and the chemical industry . After 1920 the pace of group formation in Germany increased significantly. However, the restrictive tax legislation prevented the establishment of holdings based in Germany. Frederick Haussmann submitted his first monograph on the law of company summaries in 1926, followed by Heinrich Friedländer in 1927 and Heinrich Kronstein in 1931 . Unlike Haussmann, Friedländer also dealt with details of group formation, but both authors only dealt with the abuses of group formation in passing. In 1927, 60% of the German share capital was considered tied up in groups.

The defining conceptual feature of uniform management for the group was taken from a definition of the Reichsfinanzhof (RFH) from January 1930 in the AktG of January 1937 (§ 15 AktG old version). Since then, uniform management can be assumed if management activities are carried out in at least one essential corporate decision-making area ( procurement , production , sales , finance , personnel policy ). The leadership does not have to be persistent or comprehensive; Rather, it can also be exhausted in individual management measures. Management means that the independent activity of the board of directors of the controlled company ( Section 76 AktG) is replaced by an activity that is externally determined and bound by instructions ( Section 308 (1) AktG). Uniform management is also present if the board of directors or management of several companies are occupied in personal union.

In Swiss company law, the group is only fragmentarily defined in Art. 963 OR as a combination of several companies under uniform management. If, according to this, a legal entity subject to accounting controls one or more companies subject to accounting obligations, it must prepare consolidated annual accounts (group accounts) in the annual report for all of the companies controlled. There is no comprehensive group law like in Germany.

In Switzerland there are some world-class corporations such as Nestlé or the pharmaceutical multinationals Novartis and Hoffmann-La Roche .

A basic definition, for example, is provided by Section 115 of the GmbH Act :

"If legally independent companies are grouped under uniform management for economic purposes, they form a group."

In particular, there are already two companies, “the controlling and the dependent company together as a group”. Further central regulations can be found in the third section of the Corporate Code ( §§ 244 ff ) on the consolidated financial statements . The Corporate Income Tax Act 1988 speaks of a "group of companies" ( Section 9 KStG).

Apart from Germany, only Brazil (since 1976), Portugal (1986) and Hungary (2006) have comprehensive systematic group law . Otherwise, for example, Belgium, the Netherlands or France limit themselves to minority protection. The list of the largest corporations (measured by sales) is headed worldwide by the retail group Walmart , which failed in Germany.

Example of a fictitious vertical corporation

A vertical group is a group that includes the upstream and downstream stages of the actual value creation or service provision, i.e. H. cover a wide range of services in-house and not obtain them from external companies. An example would be a group of companies in the coal and steel industry that mines coal and iron ore as well as producing and possibly also marketing steel.

However, this type of group is nowadays partly obsolete - it often turns out to be uneconomical in the modern economy . Raw materials for further processing, supply parts , etc. are no longer produced in-house, but are bought from different suppliers at the cheapest prices. Examples of this form of production, also known as lean production , would be companies in the automotive industry such as Daimler or BMW.

Example of a fictitious horizontal group.

This form is an old, but still current construction under company law . This is understood to mean companies that work on the same production or trade level . The Volkswagen group produces everything from small cars to luxury sedans. They generally try to achieve a monopoly position in their market by integrating or displacing competitors.

Example of a fictitious conglomerate.

The lateral group , also called conglomerate , conglomerate or inorganic group, consists of companies that are active in different areas. The individual companies have only limited business relationships with one another.

On the one hand, the group structure raises questions about the legal competence and responsibility for financial risks in the group, the issue of hidden contributions in kind and subsequent formation in the group, or the liability due to group security relationships (see group liability ). In the Group structure and the tax law developed an independent, beyond the taxpayer on the individual subsidiary importance (Group tax policy, fiscal unit ). Finally, the Group also the accounting policy has been playing as a means of earnings management (eg phase profit collection, transfer pricing policies: arm's length principle "arm's length" accounting treatment of derivative goodwill ) special weight. The globalization of the economy leads to new questions in international group law.

A parent company participates in other companies and takes on the administration and management for the so-called subsidiaries . However, it is still active in the traditional area of ​​production and sales. One speaks of a mixed holding company that has a double function.

The holding, as a special form of the parent company, is a finance and holding company that does not, however, carry out any operating activities - apart from the equity investments in its subsidiaries - and has no customer contact. The advantages of the holding are the simpler management of the group and the holding privilege under tax law, which means that it does not have to pay profit taxes.