The F. Hoffmann-La Roche AG , headquartered in Basel is - converted - almost 64 billion US dollars in sales the largest pharmaceutical companies in the world, followed by Pfizer and Novartis . Roche also manufactures reagents and equipment for medical examination. Roche is currently doing research in the areas of oncology , virology , neurology and transplant medicine.

Roche employs over 94,000 people worldwide. The listed group generated sales of over CHF 61 billion in 2019 . 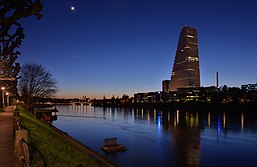 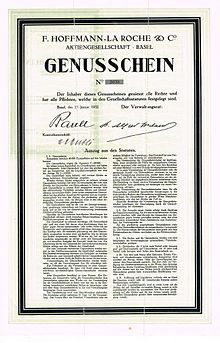 The F. Hoffmann-La Roche company was founded in Basel in 1896 by Fritz Hoffmann-La Roche . The first product was Aiodin, a thyroid preparation. In 1898 the cough suppressant Sirolin, which contained the proprietary active ingredient Thiocol , was introduced. It was marketed for over 60 years. A standardized cardiac glycoside preparation brought onto the market in 1904 was also successful . Around 1900 Roche engineers succeeded in developing a process they called continuous double extraction . With this method they were able to obtain morphine and codeine from raw opium without loss . At the suggestion of Hermann Sahli , a purified and injectable opium extract was produced from 1909 under the name Pantopon . Pantopon contained the alkaloids of opium in their natural composition. From 1915 onwards, Pantopon was also offered in sterile ampoules with a permanently attached injection needle (Tubunic). The need for tubinics increased sharply during the First World War. The factories concentrated in Basel could not meet the demand even through continuous shift operation. Pantopon was still being produced and sold in the 1970s. In 1919 Roche was converted into a public company.

In the 1930s Roche became active in the field of vitamins . The company achieved market leadership in this field, particularly through the synthetic production of large quantities of vitamin C. In 1952, the Isoniazid Rimifon, a drug against tuberculosis , entered the chemotherapeutic sector .

Leo Sternbach , who has been researching for Roche in the USA since 1941, discovered the calming effect of benzodiazepines in 1957 . Valium with the active ingredient diazepam was the best-selling drug in the world for many years. In addition to pharmaceutical research and production, Roche also began manufacturing diagnostic products in 1968. In 1971 the Institute for Immunology Basel was opened.

After dopamine deficiency was identified as the cause of Parkinson's disease , Roche launched the first dopamine preparation, Madopar ( levodopa ), on the market in 1973 .

In 1976 the Sevesoung accident occurred in an Italian subsidiary belonging to the Roche Group , in which over 200 people were injured by the dioxins released and the environment was permanently damaged.

From 1980 Roche worked with the American biotech company Genentech . This marked the beginning of the era of interferons and other genetically engineered substances.

In December 1995 the first newly developed AIDS drug was approved in the USA . The HIV protease inhibitor saquinavir (Invirase) is still used today as part of highly active antiretroviral therapy .

1997 Boehringer Mannheim was taken over. Their pharmaceuticals division was integrated into that of Roche, while the diagnostics divisions of both companies were merged to form Roche Diagnostics . This was expanded in April 2000 with the acquisition of the medical technology department of AVL List and the takeover of the insulin pump manufacturer Disetronic (2003 for 1.6 billion Swiss francs). In 2002, the Vitamins and Fine Chemicals division was sold to the Dutch chemical group Koninklijke DSM for 1.75 billion euros . In 2004, the 50% share in the joint business with OTC drugs - that is, drugs that are freely available in pharmacies without a prescription - was sold to joint venture partner Bayer AG for 2.38 billion euros .

In January 2008, the US company Ventana Medical Systems , which specializes in tissue diagnostics, was taken over for 3.4 billion dollars to strengthen the Tissue Diagnostics division .

In 1990 Roche acquired a controlling stake in the Californian biotech company Genentech and in 1995 it acquired it completely, but brought Genentech back on the New York Stock Exchange in 1999 and sold a total of 40% of Genentech's shares in the following months. In March 2009 Roche repurchased all of the outstanding shares in Genentech for $ 46.8 billion. According to Bloomberg data, this was the largest biotechnology deal to date.

In September 2014 Roche took over the Californian company InterMune, Inc., which had been traded on the NASDAQ stock exchange up to that point . InterMune's lead drug (Esbriet / Pirfenidon) was approved by the Food and Drug Administration for the treatment of certain pulmonary fibrosis a few weeks after its acquisition . The purchase price was $ 8.3 billion, of which $ 5.75 billion was raised on the capital market. At the same time, the cobas Liat PCR system from the American company IQuum was purchased for $ 275 million (plus up to $ 175 million if certain milestones were reached). The device is used for blood analysis and can detect a disease within 20 minutes.

In January 2017 Roche took over ForSight Labs . In June, the company bought the diabetes management platform, mySugr, for an unpublished price. In late December, Roche announced that it would acquire Ignyta Inc for its expanding global cancer business. In 2019, Roche acquired the gene therapy specialist Spark Therapeutics for $ 4.3 billion .

The group is divided into the two divisions Pharmaceuticals and Diagnostics . The Chairman of the Board of Directors is Christoph Franz , who succeeded Franz B. Humer , who replaced Fritz Gerber in 2001 , in March 2014 . Chief Executive Officer since early March 2008 Severin Schwan , chief executive officer (CEO) of the Division Pharmaceuticals is William N. Anderson, CEO Division Diagnostics is Thomas Shin Ecker.

The Pharma Division is a global leader in oncology . Other therapeutic areas include anemia , inflammatory and autoimmune diseases , central nervous system diseases, transplants, and viral infections . Roche has held a majority stake in the Japanese pharmaceutical company Chūgai Seiyaku since 2001 . Further focal points are infectiology and rheumatology.

The Diagnostics Division is a global leader in in-vitro diagnostics . It is headquartered in Rotkreuz ( Canton Zug ) and has additional locations in Mannheim , Penzberg ( Bavaria ), Indianapolis ( Indiana , USA) and Pleasanton ( California , USA) as well as Sant Cugat del Vallès ( Barcelona , Spain ). The division is divided into the areas of Applied Science, Molecular Diagnostics, Professional Diagnostics, Tissue Diagnostics and Diabetes Care .

Roche's sales in Germany for 2013 break down into the following proportions:

Roche as a whole company was named Top Employer Europe 2014 . Germany was also specifically named, where Roche was ranked top employer Germany in 2014 in the overall ranking.

According to the company, almost 1.8 billion euros were invested in Germany between 2007 and 2012. In 2013 a further 700 million euros were committed for investments in Germany. Roche employs more than 14,000 people in Germany, around 8,000 of them in Mannheim.

Roche's share capital consists of 160 million bearer shares and almost 703 million non-voting profit participation certificates . Both titles are on the SIX Swiss Exchange listed , however, the majority of the bearer shares is in firm hands.

Roche has been paying its shareholders a steadily increasing dividend for several years . For the year 2018 Roche has increased the dividend for the 32nd time to CHF 8.70 (previous year: CHF 8.30). This makes Roche one of the few listed companies in the world that has been able to increase its dividend every year for more than 31 years.

The largest shareholder is the Roche shareholder pool of the founding families and now the charitable Wolf Foundation with a stake of 45.01 percent. After the departure of Maja Oeri , who now directly holds 5.057 percent of the bearer shares, the pool consisting of Vera Michalski-Hoffmann , Maja Hoffmann , André Hoffmann, Andreas Oeri, Sabine Dusgliché-Oeri, Catherine Oeri, Jörg Dusmalé and Lukas Dusmalé thus loses its own previous majority share of 50.01 percent.

The Hoffmann and Oeri families are considered to be the second richest of the 300 richest in Switzerland , with assets estimated at between CHF 18 and 19 billion . By 2018, assets had grown to an estimated CHF 25 to 26 billion.

The second largest owner of Roche bearer shares is the Swiss pharmaceutical company Novartis with a stake of 33.33 percent .

Due to its presence in the media, Tamiflu is one of the manufacturer's best-known drugs. Hoffmann-La Roche is also very well represented in the field of cancer drugs and drugs against viral and metabolic diseases.

The cancer drug Avastin was awarded the Galenus von Pergamon Prize in 2007 , a science award for pharmaceutical research and drug innovations in Germany.

Diagnostics include a wide range of instruments and tests for diagnosing diseases. In the course of the corona crisis in Europe and the USA in March 2020, Roche was able to develop an automated series test for the virus. Here is a selection of well-known products:

Roche Applied Science devices are mainly used in the fields of genomics and proteomics .

Roche planned to expand its headquarters in Basel by 2011 for 550 million Swiss francs and, in this context, to build Building 1 , which was supposed to be reminiscent of the double helix of deoxyribonucleic acid (DNA) . In December 2009 a modified plan was presented; the new skyscraper, the Roche Tower (Building 1) , is 178 meters tall and is the tallest skyscraper in Switzerland and exceeds the double helix design by 21 meters. As part of a comprehensive redesign of the headquarters in Basel, additional high-rise buildings for research and administration are being built, including the Roche Tower (Building 2) , which is projected to be 205 meters high and is due to be completed in 2021.

The former Hoffmann-La Roche building in Vienna was built in 1962. It was placed under protection by the Federal Monuments Office in 2009 and has been used as a hotel since 2011.

In 2001, Roche had to pay a fine of 462 million euros imposed by the EU Commission for prohibited price fixing in connection with vitamin preparations. In addition, Roche is accused of having been involved in illegal price fixing in the previous decades.

In 2008, the Iraqi government made serious allegations against foreign companies, including Roche, according to which the Iraq to times of dictatorship under Saddam Hussein had incurred billions in losses through bribery.

In the book Korrupte Medizin - Doctors as accomplices of corporations , the journalist Hans Weiss raises allegations against numerous pharmaceutical companies, including Roche, in relation to financial donations to doctors with the aim of influencing the prescribing practice.

Sales of CellCept in China

In 2010 Roche received the negative Public Eye Award in the “Swiss” and “People” categories (Internet polls ) for the sale of the immunosuppressant CellCept , which prevents the rejection of transplanted organs. The drug is also sold in China, but Roche allegedly did not know anything about the origin of transplanted organs in China. At the end of 2008, the Chinese Vice Minister of Health admitted that 90% of the organs come from those executed, whose organs are removed after the execution of the death sentence without the prisoners' consent during their lifetime.

Doubts about the correctness of the Tamiflu studies

The Cochrane Institute has since expressed strong doubts about the studies that led the World Health Organization (WHO) to recommend Tamiflu against avian flu , which has brought Roche billions. According to the article in the period from 25 January 2012, the authors were employed by Roche or employed as a consultant, and 8 of 10 referenced studies were never published. Independent studies found no evidence to support the statements.

Roche has long sold a cancer drug that was also used against multiple sclerosis (MS). However, no application was made for approval, as the patent for the active ingredient had expired. Therefore, a similar active ingredient was developed, and approval for MS treatment was applied for and granted. So far, MS patients have been treated with the cancer drug after off-label use . However, since there is now an approved drug, this is no longer permitted in Germany. The old drug cost 3,000 euros a year, the new 33,000 euros a year. The statutory health insurance companies expect additional costs of two billion euros per year.

Use Avastin instead of Lucentis for wet age-related macular degeneration

Roche's drug Avastin is used to treat wet age-related macular degeneration, but is not approved for this use. Criticism was raised with regard to the dependence on the shareholder Novartis in connection with its significantly more expensive drug Lucentis when the CATT study in 2011 came to equally good results for treatment with Avastin, but approval was not in prospect due to the dependencies. In the years that followed, legal uncertainties remained when using Avastin. In 2014, fines were imposed on Roche and Novartis on suspicion of anti-competitive agreements by the Italian competition authority, although the resulting proceedings are still ongoing in 2018.