He was the third child of Friedrich Hoffmann and Anna Elisabeth Merian. Both parents came from well-known Basel families ( Daig ). A grandfather of the mother (Johann Jakob Merian) was a founder of the trading company Frères Merian . The father's family had been successful in the silk ribbon industry since 1669 and later in the development of tar dyes .

Fritz Hoffmann successfully completed a banking apprenticeship in Yverdon in 1886 and then completed an additional apprenticeship in the Basel drugstore Bohny, Hollinger & Co. He then worked for a London chemical trading company. In 1892 he found employment in a grocery store in Hamburg , where he experienced the cholera epidemic of 1892 .

After the end of the quarantine he was able to return to Basel to become a business partner of the drugstore Bohny, Hollinger & Co. in 1893. There he headed the attached chemistry laboratory, which produced floor wax and essential oils . Soon, however, there was a falling out with the owner of the company and in order to forestall a dismissal, he obtained 90,000 Swiss francs from his father , bought up the laboratory and founded the Hoffmann, Traub & Co company in 1894 with Max Carl Traub (1855–1919) . The new company first developed a wound product called Airol , but it only achieved moderate sales success.

In 1895 Fritz Hoffmann married Adèle La Roche. When Max Carl Traub left the company in 1896, it was renamed F. Hoffmann-La Roche & Co. on October 1st . In the same year Hoffmann hired the chemist Emil Christoph Barell . Barell was the leading figure at Roche until the 1950s.

The company ran into great difficulties as a result of the World War and the October Revolution in Russia . In 1918 Hoffmann also fell ill with severe kidney disease. The company could no longer be saved without outside capital and was converted into a stock corporation. 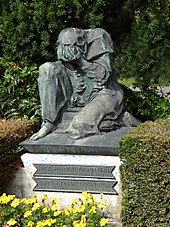 Hoffmann's influence on the company's business operations waned. In April 1919, his health continued to deteriorate. In the summer of the same year he divorced his wife Adèle and married his long-time lover Elisabeth von der Mühll, with whom he retired to Ticino . In March 1920 he returned to Basel terminally ill and died there on April 18th. He couldn't see how his company became one of the most important drug manufacturers.

Fritz Hoffmann-La Roche was one of the first to see the importance of standardized branded drugs in medicine.

He found his final resting place in the Wolfgottesacker cemetery in Basel. The grave sculpture was created by Johann Michael Bossard .