Interferons ( IFN , from Latin interferre , to intervene, to interfere) are proteins or glycoproteins that have an immune-stimulating, especially antiviral and anti-tumor effect (see also cytokines ). They are produced as endogenous tissue hormones in human and animal cells, especially by leukocytes (white blood cells, e.g. T lymphocytes , monocytes) and fibroblasts . Phytoalexins fulfill a similar function in plants .

Alpha-interferon (IFN-α; also “leukocyte IFN”, formerly interferon type 1) is a protein made up of 166 amino acids . There are 23 known variants, most of which are not glycosylated .

Alpha interferon can be produced by many cell types in response to the detection of viral or bacterial nucleic acid . It activates surrounding virus-infected and non-infected cells. Proteins are consequently formed in these cells , which on the one hand inhibit further (virus) protein synthesis in those cells and on the other hand cause the breakdown of viral and cellular RNA. MHC class I molecules and proteasomes are increasingly being formed, which make virus-infected cells more susceptible to attack by T lymphocytes (immune defense). Alpha interferon activates NK cells (natural killer cells), which are used for virus and tumor defense.

The binding of the alpha interferons to their specific receptor activates the receptor-associated Janus kinases through phosphorylation , which subsequently phosphorylate and thus activate the “ signal transducer and activator of transcription ” STAT proteins ( JAK-STAT signal path ). Activated STAT proteins dimerize ( homo- or heterodimer ), translocate into the cell nucleus and activate the gene expression of "interferon-stimulated genes" by binding to certain recognition sequences of these genes. An example of signal transduction via alpha interferon is the activation of JAK1 and TYK2 (both Janus kinases on the receptor); these phosphorylate STAT1 and 2, which as heterodimers form a complex together with IRF-9 ( interferon regulatory factor 9 ) (ISGF3: interferon stimulated gene factor 3 ). This binds to a specific element of the “interferon-stimulated genes” called “ interferon stimulated response element ” (ISRE) and activates gene expression. 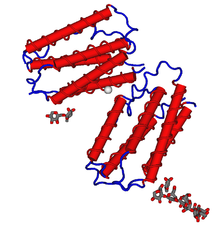 Beta interferon (IFN-β; also "fibroblast interferon") is a glycoprotein made up of 166 amino acids. It is produced by virus-infected fibroblasts (cells of the connective tissue) and presumably also by all other cells. Beta interferon binds to the same receptor as alpha interferon and has similar effects.

Gamma interferon I (IFN-γ; "immune interferon", formerly type II interferon) is a glycoprotein made up of 143 amino acids. It is in active form as a heterodimer.

Gamma interferon is produced by TH1 cells (subpopulation of T helper cells , CD4 receptor , part of the adaptive immune defense ) after contact with a macrophage that has phagocytosed bacteria .

Gamma interferon has an activating effect on macrophages by promoting better fusion of phagosomes with lysosomes and the production of the bactericidal nitric oxide and reactive oxygen radicals. It also induces antimicrobial peptides, 1α-hydroxylase in macrophages and converts 25 (OH) vitamin D 3 into 1,25 (OH) 2 vitamin D 3 without product inhibition of 1α-hydroxylase. The TH1 immune response is important for the defense against intracellular infections (viruses, chlamydia, mycobacteria, fungi) and tumors.

Alpha interferon has been used for several years for the treatment of chronic hepatitis B and earlier for the treatment of acute and chronic hepatitis C infections. For these diseases, a genetically engineered alpha interferon (interferon alpha-2a or interferon alpha-2b) is used therapeutically, which has to be injected subcutaneously three times a week . In the meantime, slightly modified, so-called pegylated interferons are available, which only have to be administered once a week due to a longer half-life. In addition to the therapeutic use of alpha interferons in the treatment of viral hepatitis, interferons of this group are also used in cancer therapy, namely for the treatment of hairy cell leukemia , T-cell lymphomas of the skin, malignant melanoma of the skin and the mucous membrane (interferon alpha -2a or alpha-2b in stage II and III as adjuvant therapy), Kaposi's sarcoma and CML . The anti-tumor effectiveness of alpha interferons is based on the one hand on an anti-proliferative effect, i.e. That is, the tumor cells are inhibited in their increased division activity, and on the other hand both on the activation of natural killer cells, which can kill tumor cells themselves, and on the induction of differentiation. Alpha-interferon is also used in the therapy of myeloproliferative neoplasias (MPN), such as polycythemia vera and essential thrombocythemia , the effect being based on the suppressive effect on the bone marrow .

Gamma interferon is used as a drug against osteopetrosis and tumors (with currently less success).

Side effects of interferon therapy

Side effects of interferon therapy are flu-like symptoms such as fever (possibly with chills ), tiredness and joint pain. As a result of the suppressive effect on the bone marrow, leukopenia and thrombopenia occur . The deterioration of liver function is particularly dangerous in the case of pre-existing liver insufficiency . Autoimmune diseases of the liver or thyroid gland can rarely occur. Psychological changes such as depression or an increased tendency to be aggressive can also occur. In many cases, the assignment of side effects cannot be estimated with certainty. B. Alpha-interferon is used in combination with ribavirin (nucleoside analog) in the case of hepatitis C therapy .

Representation and synthesis on an industrial scale

In 1957 interferon was discovered by the British Alick Isaacs and the Swiss Jean Lindenmann at the National Institute for Medical Research in London. They found that after incubation with inactivated influenza viruses, embryonic chicken cells in tissue culture released a substance they called interferon, which protected these and other chicken cell cultures from being destroyed by the viruses. In 1979, Charles Weissmann's laboratory in Zurich succeeded in transferring human interferon genes into bacteria ( recombinant DNA ). This made it possible to produce pure interferon in any quantity.