The Lonza Group AG is a Swiss chemical and pharmaceutical companies headquartered in Basel .

In 1897 the Lonza electricity works were founded in Gampel in the canton of Valais , named after the river that flows out of the Lötschental . The electricity generated was initially used to produce calcium carbide and acetylene . In 1909 the company moved to Visp , where artificial fertilizers were initially produced. In 1920 the company entered the ketene and dikete business , an area in which Lonza is still active today. In 1950 the company entered the niacin (vitamin B3) business . A separate naphtha - Cracker - with 30,000 tons per year acetylene one of the smallest crackers in the world - went into operation in 1965 in Visp. In 1969 the company expanded into the American market. Until the 1990s, the chemical industry was an important pillar of the city. The former Lonza plant existed in Waldshut from 1913 to 1990, which at its peak in the 1950s employed up to 1,600 people. A business park has been created here.

In 1974, Lonza was taken over by Alusuisse and in the following years formed the Alusuisse Group's chemicals division as a subsidiary. With the restructuring of Alusuisse into a holding company , Alusuisse-Lonza Holding AG was created in May 1990. In 1992 a production site in Kouřim in the Czech Republic was purchased, and in 1997 the company expanded to China.

The visible realignment of the group began in April 1998 when it was renamed "Alusuisse Lonza Group AG" (Algroup). On August 11, 1999, the Board of Directors announced its intention to spin off the Lonza Chemicals and Energy divisions again in order to carry out a three-way merger of the Algroup with Alcan and Péchiney , in which only the aluminum and packaging divisions are to be merged. On October 18, 1999, the proposed spin-off was approved at an extraordinary general meeting, and on November 1, the now independent Lonza Group AG, based in Zurich, went public. The former parent company Alusuisse Lonza Group AG only deleted the former connection to Lonza from its name in June 2000. In April 2002 the registered office of the Lonza Group was relocated from Zurich to the Group's operational headquarters in Basel.

In 2006, Lonza listed the “Polymer Intermediates” division on the Milan stock exchange, which has since been operating under the name “Polynt SpA”, based in Italy. The Lonza Group no longer holds a minority stake in Polynt. A portion of the proceeds from this IPO went to the acquisition of the biotechnology divisions of the US biotechnology company Cambrex, with $ 460 million. These business areas were integrated into Lonza Biopharmaceuticals or as a new “Bioscience” sector in the Group's business. In 2011, the US biocide manufacturer Arch Chemicals was bought for around 1.6 billion Swiss francs, making it the largest takeover in the company's history. Lonza has also been listed on the main segment of the Singapore Stock Exchange since October 2011, making it the first company to be listed on the Swiss Stock Exchange with a secondary listing in Singapore. In December 2016, Lonza announced the largest acquisition in its history to date, the acquisition of the US drug capsule manufacturer Capsugel from KKR for $ 5.5 billion. In February 2017, Lonza announced that it would build a factory for biopharmaceuticals with the French pharmaceutical company Sanofi in Visp. The companies are investing a total of CHF 290 million in this. 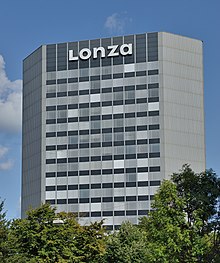 Lonza's business also includes the production and process support of active pharmaceutical ingredients and the microbial control business. Its activities also include the areas of water treatment, personal care , health and hygiene , industrial preservation , material protection and wood treatment, as well as cell-based research, endotoxin detection systems and the manufacture of products for cell therapy.

Lonza Group has its headquarters in Basel and is listed on the Swiss stock exchange since November 1999. Exchange SIX Swiss listed . The oldest and largest R&D and production site with around 2,800 employees is located in Visp in the canton of Valais and is part of the group subsidiary "Lonza AG".

When managing director Stefan Borgas took over in 2004, Lonza developed in the direction of life sciences with a focus on biotechnology and exclusive synthesis for the pharmaceutical sector. Almost all acquisitions in 2006–2008 included biotech companies as well as the feed / food and nutrition sectors. As a result of this reorientation towards life sciences, the classical chemistry of the “Fine Chemicals” division is also to be reoriented. The aim here is to focus on nutrition, agriculture and hygiene. The separation of the “Polymer Intermediates” division in 2006 also fits into this strategy. 2007 was characterized by a consolidation of the acquisitions made in the previous year. Lonza's consolidation continued in 2008, flanked by small and medium-sized acquisitions such as the German amaxa.

At the end of 2009 the board announced that it would close three locations in the USA and UK. About 170 employees are affected. The cost-cutting program expired towards the end of 2010, which is said to have resulted in savings in the high double-digit millions. With the acquisition of Arch Chemicals in October 2011, Lonza expanded its portfolio. In January 2012 Lonza parted ways with Stefan Borgas after the net profit for 2011 had almost halved and Borgas had not met expectations. Richard Ridinger has been the new CEO of Lonza since May 1, 2012.

The company Moderna has its production capacity, especially for the COVID-19 vaccine candidates mRNA 1273 and other future products extended. To this end, a 10-year agreement was announced with the Lonza Group. Technology transfer is slated to begin in June 2020, with the first batches of mRNA-1273 expected to be manufactured at Lonza's US facility in July 2020. Further transfers should increase the production capacity for mRNA-1273 to one billion doses p. a. - calculated on a dosage of 50 µg per can - can be increased.

The 68 meter high Lonza house by Hans Rudolf and Peter Suter from 1962 is a striking skyscraper in Basel and is often compared to the Pirelli building in Milan . At the time of moving in, the high-rise was the tallest in Basel. The sober, delicate facade of the house earned him the nickname Razor .

Mercury pollution in the Visp area

During the construction work on the A9 in the Visp area , it became known in 2010/2011 that excavated material was heavily contaminated with mercury (Hg). Lonza and the cantonal authorities had known about the soil contamination for a long time . A maximum value of 3070 mg mercury per kg was determined, which corresponds to about 60,000 times the natural occurrence of mercury. These values ​​can be traced back to the practice of Lonza AG from 1930 to 1976 of discharging wastewater containing mercury into the large underground sewer without treatment. The amount of mercury released into the Grossgrundkanal is currently estimated by the Lonza at 50 tons, another 50 tons were released into the atmosphere, 27 tons are currently considered to be "lost".

In further, large-scale investigations, it was found that in the residential area of ​​Visp / Raron, 71 of 469 sampled plots have a value of over 2 mg Hg / kg; the use of private gardens and playgrounds as well as soil remediation is prohibited for these plots . Another 104 parcels have a value between 0.5 and 2 mg Hg / kg and are thus included in the cadastre of the contaminated sites. Some of the contaminated plots are located far away from the Grossgrundkanal - the pollution can be explained by the fact that the sediments of the Grossgrundkanal were dredged for decades and used for the surroundings of residential buildings or as fertilizer.

Lonza AG has agreed to pre-finance the investigation for the rehabilitation of the plots in need of rehabilitation, but expressly without prejudice .

On March 31, 2015 it became known that the AefU (Doctors for Environmental Protection) and the WWF Oberwallis had taken further samples in which more than 100 other problematic chemical substances were detectable. According to the AefU, the overall toxicological effect can hardly be assessed due to the variety of substances found, also because there is no limit value for most of the substances found in the Federal Ordinance on Contaminated Sites or in the Soil Protection Ordinance.

The production of niacin produces nitrous oxide, which is harmful to the climate . At Lonza, nitrous oxide emissions amount to around 600,000 tonnes of CO 2 equivalents per year, which corresponds to around one percent of Switzerland's annual greenhouse gas emissions .