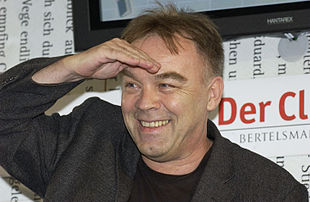 Gerhard Seyfried (born March 15, 1948 in Munich ) is a German comic artist , caricaturist and writer . Seyfried made a name for himself internationally as a graphic chronicler of the left-wing alternative scene, which he caricatured in a humorous, amiable manner and with lots of puns. His large-format hidden objects became particularly popular as posters. He has been publishing meticulously researched historical novels since the 2000s, most of which take place before the First World War .

His father Fritz Seyfried worked as a purchasing manager and his mother was employed by the Federal Railroad . Gerhard Seyfried grew up with his sister Sylvia, who was three years his junior, in simple but sheltered circumstances in Munich-Pasing . From 1963 to 1967 he did an apprenticeship as an industrial clerk , which he broke off shortly before the exam. After completing his apprenticeship, he was allowed to do an internship with the graphic designer in the advertising department for a year and was able to learn “a great deal”. This was followed by further training as a commercial artist in Munich. When he received the draft notice for the Bundeswehr, he asked military service opponents for advice. They referred him to a neurologist who wrote him unfit for military service because of a previous tear in the upper jaw, as he was not allowed to wear a steel helmet with it. His father supported him in his desire to refuse military service. In 1967 he was allowed to study painting and graphics at the Munich Academy for the Graphic Arts because of his special talent for drawing and despite the lack of a high school diploma . He was dismissed from the academy because of the end of 1969 ringleaders economy of strikes against the emergency law - officially due to lack of talent.

From 1970 he worked as a freelance graphic artist and caricaturist for advertising agencies , local companies and the Munich city ​​magazine Blatt . From 1971 on, Seyfried described himself as a freelance cartoonist . His friendship with Fritz Teufel and other left-wing activists meant that his twelve-person shared apartment , the newspaper editorial team, was frequently searched by the police. Seyfried estimates a total of 20 house searches and "a few dozen" arrests, although he was "nothing more than a marginal figure". This "endless police harassment" was a major motive for him to move from Munich to Berlin in 1976. But “it continued in Berlin. They didn't leave me alone until the end of the 70s. "

West Berlin has been the backdrop for his comics and cartoons since 1976 . The stories are set in the left-wing, alternative squatter scene and ecology movement , which Seyfried targets both satirically and amiably. Seyfried's drawings and posters were a permanent fixture in the residential communities in the Federal Republic of Germany. "In the late 1970s and until the mid-1980s Seyfried was the most stolen draftsman in the republic - the number of pirated prints in school newspapers and trendy newspapers was legion". His comic figure Zwille , a black anarchist male with spherical head and beard hair, who grins broadly and often holds a spherical bomb smoldering on the fuse, has become a trademark . In addition, he still receives requests from police officers all over the world for posters depicting police officers with bulbous noses.

After the sales success of his collection of caricatures from the Munich newspaper "Where should it all end", he spent several study visits to the United States from 1978 onwards . In San Francisco he met his role models Gilbert Shelton and Paul Mavrides , who became his friends. These encounters triggered a change in his self-image: "From then on, he no longer saw himself" just "as a political cartoonist of the scene, but as an artist who also tells longer stories." His first long picture story was Invasion from the Everyday life (1980) about an invasion of West Berlin by aliens, followed by his contribution to the comic book Irrwitz-Comics (1983) about the West Berlin scene and Das Schwarze Imperium (1984), a political satire with elements of the agent thriller. Seyfried later translated the stories of the underground comic series The Fabulous Furry Freak Brothers by Shelton and Mavrides together with Harry Rowohlt .

In 1984 he moved from his refurbished apartment in Kreuzberg to bourgeois Charlottenburg , because there he found the peace and quiet he needed to work.

In 1990 he met Ziska , an author and illustrator from Berlin who also came from Munich . With this relationship, his choice of subject changed to dystopian science fiction . “It was a huge shock for my fans. Comics that aren't funny. Dark science fiction. ”Seyfried published four comic albums with his“ friend and colleague Ziska ”. The artist duo called themselves the “Harmonian Anarchists” and in 2008 still had material for “three more comic books that we would love to make.” Because of the low income from comic albums, the project stayed with: “In Germany you can't live on it. For 'Starship Eden', the last book we shared with my colleague Ziska Riemann, we subsequently calculated an hourly wage of five marks. "

In 1996 he wrote with Mathias Bröckers Hanf im Glück . Seyfried drew a. a. a satirical “Conspiracy Diagram” for the 9/11 book by Mathias Bröckers, which was confiscated twice in 2002 because of the use of symbols of unconstitutional organizations . After working with Bröckers in Solothurn (Switzerland) in 2003 , he returned to Berlin in 2004.

Gerhard Seyfried occasionally worked as a translator , model maker , photographer and journalist . He owns a collection of international police stars .

His father's library, which partly consisted of a colonial library with memories and adventure novels, later aroused his desire to research German history before the First World War . After the Herero uprising (2003) and the Munich city and fun guerrilla (2004), Seyfried's third historical novel Gelber Wind (2008) again describes an uprising by the oppressed, this time the so-called Boxer Uprising in Beijing in 1900 .

The Green politician Hans-Christian Ströbele in Friedrichshain-Kreuzberg was the only politician for whom the anarchist Seyfried made political advertising, since Ströbele, unlike Alliance 90 / The Greens, rejects military operations by the Bundeswehr. His posters with the popular hidden objects contributed to the success of the first direct mandate of a green member of the Bundestag in 2002, 2005 and 2009 . Seyfried has been supporting Die Linke with election campaign posters since 2013 .

From June 2006 to October 2010 Seyfried published a blog in the internet edition of the Berlin daily taz , in which he could present his witty words and pictures. To this day, however, he has not been allowed to publish a cartoon column in a daily newspaper, which his friend Arnulf Rating expressed indignantly on the occasion of the opening of a Seyfried retrospective in the Frankfurt caricatura .

Because Seyfried cannot live on his political comics and posters alone, he usually had to take on commercial graphic work. Writing historical novels from 2003 onwards improved his income. The unproductive love for his picture stories contributed to the fact that he was unable to start a family. In total, he published fifteen comic albums by 2018.

With Flucht aus Berlin (1989/90) he changed his drawing style and switched from the "bustling line that circles around the tiniest little things" ( FW Bernstein ) to ligne claire . He now uses the computer to color his figures: “I draw with a pencil, then pause with ink, but no longer color by hand. It's too expensive and too toxic. ”His colleague Ziska judged:“ He's very precise and an incredibly good technician. ”When he is working on a new comic book alone, he foregoes a“ storyboard ”, a visualized scene book, and leaves entirely on his spontaneous intuition. A storyboard was only developed jointly for the comic albums that were created together with Ziska .

When writing his historical novels, however, he first reconstructs the “framework of historical events”. For this purpose, however, he does not limit himself to the historical-scientific secondary literature, but searches in archives for original documents and primary sources . Old photographs are also helpful for him, as he can "read out a lot of things" from them. Only at the end of his research does he connect the connection between the events and fictional characters who primarily act as observers.