Harry Rowohlt at a reading in 2009

Rowohlt's father was the publisher Ernst Rowohlt . His mother, the actress Maria Pierenkämper , was married to the painter Max Rupp for the third time when he was born . It was not until the mid- 1950s that she divorced Rupp and in 1957 married Ernst Rowohlt, who was over 20 years her senior and who died in 1960. 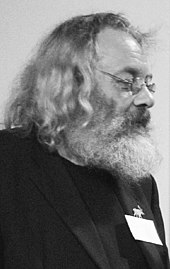 Harry Rowohlt grew up in different places, attended the Walddörfer-Gymnasium in Hamburg and did his Abitur there. He then completed an apprenticeship as a publisher's bookseller at Suhrkamp Verlag in Frankfurt am Main , where he met his future wife Ulla at a ball, and then volunteered at Rowohlt Verlag, now run by his half-brother Heinrich Maria Ledig-Rowohlt , and at New York's Grove Press . After returning to Germany, he worked temporarily as a copywriter in the advertising agency GGK . From 1971 he was a freelance translator from English. The first translation was a children's book by Alexander Sutherland Neill , which was previously considered untranslatable; It was published by Rowohlt Verlag under the title The Green Cloud and immediately became a bestseller. In addition, he became known as a reader of the works he translated, as the author of the column Pooh's Corner in the weekly newspaper Die Zeit and as the actor of the homeless Harry in the television series Lindenstrasse . He was also heard as the spokesman for the bear in Wenzel Storch's film Die Reise ins Glück .

He inherited 49 percent of the publishing house from his father, but refused to get into the publishing business. In 1982 the two brothers finally sold the company to the Georg von Holtzbrinck publishing group . He fended off inquiries about the publisher with a form letter: “I have three circulars. Circular 1 reads: I'm already glad that my name is not Kiepenheuer and Witsch. If you want something from Rowohlt-Verlag, contact Rowohlt-Verlag and not me. Spread the word! ". In the 1970s he joined the SPD because of Willy Brandt .

Rowohlt's column Pooh's Corner appeared at intervals of three to ten weeks until 1998. There was more than half a year between the first 1998 corner (in the second calendar week ) and the second. In the two following years only one column was written until he finally, without further explanation, initially wrote no more. Without prior notice, a new Pooh's Corner appeared in Zeit No. 51/2005 on December 15, 2005 , in which Rowohlt explained in the introduction that he had read his last columns with growing displeasure, which is why he did not want to expose anyone to them anymore. Since then, more of Rowohlt's Corner articles have appeared in loose succession , the last in March 2013.

Rowohlt was also known for his excessive solo stage appearances, which rarely lasted less than four, sometimes even more than six hours. He often interrupted the readings with comments on the texts, rambling remarks, anecdotes , autobiographical stories, dialogues with the audience and much more, so that the texts read were rather in the background. For a long time he called the events loosened up in this way "drama with emphasis" because he consumed alcoholic beverages during the reading, for which he explained: "The audience has a right to experience how the speaker is ruined". In an interview he explained about his unmistakable appearance: "[...] if you looked like a hippie as a young person and have remained somewhat true to yourself, as an old man you look like a bum and not like Joschka Fischer."

In June 2007 Rowohlt announced that he was suffering from the incurable disease polyneuropathy , which severely impaired his ability to walk. He commented on his own illness sarcastically: “As a passionate couch potato, I don't need to undergo major retraining.” Rowohlt wanted to continue his role in Lindenstrasse , if necessary while sitting, as he immediately informed the producer. After a long and extensive abstinence from alcohol, Harry Rowohlt gave readings again since 2009. Since there was only water on the table, he now called the events "emphasis without drama".

Rowohlt last lived with his wife in Hamburg-Eppendorf . In the last years of his life, Rowohlt also suffered from lung cancer , from the consequences of which he died in Hamburg in 2015 at the age of 70. He was buried in the Ohlsdorf cemetery in Hamburg. The tombstone is a boulder on which, in addition to a reproduction of Rowohlt's autograph, the year of his birth and death was carved.

sorted by author, then chronologically