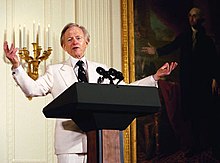 Wolfe, along with Truman Capote , Norman Mailer , Hunter S. Thompson and Gay Talese, is considered to be the founder of New Journalism , a reportage style that uses literary elements in non-fictional texts. The subjective point of view and the writing style, which is based on literary modernism, contrast with the factual, objective style of current reports. His trademark were white suits.

Wolfe was at first pitcher in baseball and had already begun during the study, half playing professionally. In 1952 he earned a trial training session with the then New York Giants , but it was interrupted after three days, for which he blamed his inability to throw good fastballs . Wolfe gave up the sport and followed the example of his professor Fishwick and enrolled in the American doctoral program at Yale University . His doctoral thesis was entitled The League of American Writers: Communist Organizational Activity Among American Writers, 1929–1942 . In the course of his research, Wolfe interviewed many writers, including Malcolm Cowley , Archibald MacLeish, and James T. Farrell . Commenting on the dissertation, one biographer commented: "If you read it, you can see what the worst impact graduate education has on many who have suffered is: it diminishes all sense of style." (Translated) His dissertation was initially rejected, but ultimately but accepted after rewriting it objectively rather than subjectively. After leaving Yale, he wrote to a friend using expletives to explain his personal views on the dissertation.

After studying at Yale, Wolfe worked as a journalist, including for the New York Herald Tribune and their New York magazine (which later became independent) and for the Washington Post . His first book, titled The candy-colored tangerine-red-sprayed streamlined baby, was a collection of various reports on pop music and car hobbyists, among other things . The work, published in 1965, is considered to be one of the "cornerstones of New Journalism ".

During the 1960s and 1970s Wolfe published other collections of reports, including Unter Strom, a book about the journey of the community by Ken Kesey and his colleagues in 1964 from San Francisco to New York in a colorful school bus. In the essay Radical Chic and Mau-Mau at the Welfare Agency, Wolfe discussed the mere fashionable support of radical movements like the Black Panther Party by rich, white artists and "socialites". Another bestseller was The Heroes of the Nation, a novel-like report on NASA test pilots . The title of the book The Right Stuff soon became proverbial; In the work, the space myth was brought back to the ground and the internal conflicts of the test pilots, astronauts and their partners are presented. The 1983 theatrical adaptation by Philip Kaufman was given the more apt German title The Stuff that Heroes are Made of .

Wolfe, a talented draftsman, illustrated several of his books himself. From the 1970s onwards he turned to art and architecture criticism in essays such as The Painted Word and Living with the Bauhaus . Both books led to sometimes bitter disputes. In The Painted Word, Wolfe criticizes modern painting and art after the Second World War. He reproached her that she had only illustrated well-known clichés and served the artistically sterile interests of a small clique through an elite system of galleries. In Living With the Bauhaus, he attacked the uncritical adoption of European architecture in the USA. In his opinion, this has led to monstrous, non-functional and faceless buildings that a small caste of architects would have forced upon clients and the people. 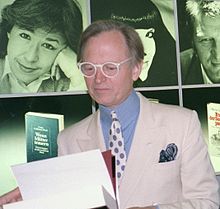 Tom Wolfe in 1988 at the Frankfurt Book Fair

As early as the 1970s and increasingly in the 1980s, Wolfe turned to narration and the novel. His debut novel Purgatory of the Vanities appeared in 1987. The bestseller deals with the stock market boom of the 1980s and the purely material-oriented culture of the Reagan years. Using the example of the white wall street broker Sherman McCoy, who becomes the victim of a witch hunt by the media and prosecutors after the death of a black man from the Bronx through him and his lover , Wolfe masterfully shows the cynicism of the metropolitan people of New York. The book, which - alongside Bret Easton Ellis ' American Psycho - was regarded as the exemplary New York book of the 1980s, was filmed in a controversial manner in 1990 by Brian De Palma .

In parallel to the spectacular success of the novel's debut, Wolfe continued to write reports. The Tinkerings of Robert Noyce dealt with the development of computer technology in Silicon Valley , in particular with Noyce and its activities. It wasn't until 1998 that Wolfe published his next novel A Whole Guy, which also became a bestseller. In 2004 Wolfe published the university novel I am Charlotte Simmons. In this novel, he describes the world of the campus at the (fictional) renowned Dupont University in Pennsylvania, to which the talented but naive and conservative title character is admitted. She enters a “world in which first-year students are traded as 'fresh meat' and where fashion, sports, sex, parties and a cool image count” (Susanne Schmetkamp).

He made a cameo in The Simpsons in season 12, episode 3, as well as a virtual appearance in season 18 , episode 6. In 1992, he appeared in the documentary The Consensus Factory. Noam Chomsky and the media on. In 1999 he was elected to the American Academy of Arts and Letters and in 2015 to the American Academy of Arts and Sciences . Tom Wolfe died in New York in May 2018 at the age of 88.