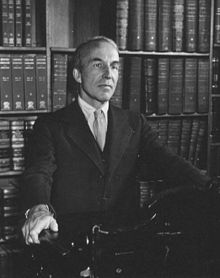 Archibald MacLeish was born the son of a haberdashery and college professor. From 1907 to 1911 he attended the renowned Hotchkiss School in Massachusetts. From 1911 to 1915 he studied English literature at Yale University , 1915-1919 at Harvard University law. While studying at Yale, he was accepted into the Skull and Bones Student Association there. In 1916 he married Ada Hitchcock. The marriage resulted in four children, one of whom died in childbed. In 1917 he interrupted his studies to serve on the French front during the First World War , first as an ambulance driver and later as an artillery captain.

In 1917 he also published his first volume of poetry. After being admitted to the bar , he initially worked in his field and was also briefly editor of The New Republic magazine , but then decided to pursue a career as a writer. In 1923 he moved to Paris with his wife . At that time, the Montparnasse there was the focus of American modernism , and MacLeish thus fell into the circle of the so-called Lost Generation , i.e. the American community of exiles around Gertrude Stein and Ernest Hemingway . He did not return to the United States until 1928.

From 1930 to 1938 he was editor of Fortune magazine and became increasingly involved in political debates, particularly against fascism, which was also gaining ground in the United States. He was an admirer of US President Franklin Delano Roosevelt , who made him head of the Library of Congress in 1939 . He held this position for five years, during which he modernized the Library of Congress.

Although he had criticized Marxism in his career , he came in the 1940s and 1950s first into the focus of J. Edgar Hoover , later Joseph McCarthy , who suspected him of leftist political leanings. The main reason for this was his commitment to anti-fascist organizations like the League of American Writers and his friendship with prominent authors from the left political spectrum. A victim of this slander was MacLeish's deputy in the Office of Facts and Figures , Malcolm Cowley , who was ousted from office after a few months.

During his time in Paris, MacLeish was strongly influenced by the poetry of TS Eliot and Ezra Pound and is therefore often assigned to the tradition of “waste land” poets.

In his poem " You, Andrew Marvell ", with the title of which he addresses this metaphysical poet of the 17th century by name, he refers to Marvell's famous poem " To his coy mistress ". As Blanke emphasizes in his interpretation, MacLeish “like Marvell's lover enters the flow of time without being able to find a place where he is safe from the loss of space and time.” As the metaphysicians of the 17th century can for MacLeish not "the act of love as such, but only its imaginative perpetuation overcoming time."

A complete edition of MacLeish's works is still pending, but many of his poems, dramas, essays, letters and interviews are available in anthologies:

Head of the Library of Congress