Hellmuth Karasek (born January 4, 1934 in Brno , Czechoslovakia ; † September 29, 2015 in Hamburg ) was a German journalist , book author , film and literary critic and professor of theater studies . He also wrote three plays under the pseudonym Daniel Doppler . He became known to a wide audience as a participant in the ZDF television program The Literary Quartet .

The Karasek family fled the Red Army from the Silesian Bielitz to central Germany in 1944 during the Second World War and reached Bernburg (Saale) via intermediate stops . Karasek had previously been a member of the Hitler Youth and a student at a National Political Education Institute (Napola) for a few months . His parents were sympathizers of the Nazi regime; later he said: "I had nothing to do with ideology, but I was so unsportsmanlike and a mommy boy that I was mercilessly dragged in the Napola."

During his time from 1948 to 1952 at the Oberschule in Bernburg (today again High School Carolinum ) he set a literary memorial in his book On the Escape as a contemporary document. In it he describes in particular experiences typical of the time in the politically difficult time of Stalinism with his teachers Martin ("Mope") Kersten, Edgar Kampf, Gertrud Mehlhose and Walter Kühlhorn. After graduating from high school in 1952 as the best student, Karasek moved from the GDR to the Federal Republic of Germany . He completed his studies in German , history and English at the University of Tübingen with a doctorate . Karasek told the German Press Agency about his past as follows: “I lived under two dictatorships. I liked the first one and only later realized that it was a pig regime. I hated the second from the start. ”In 1959, Karasek lived for nine months as a young teacher in Ebersberg and taught German at the branch of the Grafingen Goethe Institute. In October he moved to Stuttgart .

Karasek began his journalistic career at the Stuttgarter Zeitung . After that he was chief dramaturge at the Württemberg State Theater in Stuttgart for a year and from 1968 a theater critic for the weekly newspaper Die Zeit . From 1974 to 1996 he headed the cultural department of the news magazine Der Spiegel , where he also introduced the names of authors. After his break with the mirror due to a failure to reprint his criticism of the film Rossini , he processed his experience in a key novel in Das Magazin in 1998 . After working for Spiegel , he was co-editor of the Berlin daily Der Tagesspiegel until 2004 . Karasek then worked for the newspapers Die Welt , Welt am Sonntag and Berliner Morgenpost of Axel Springer SE, among others .

Karasek has also appeared frequently on various television shows. He was a regular participant of over the long period from 1988 to 2001 ZDF telecast The Literary Quartet , under the dominant leadership of Marcel Reich-Ranicki was.

Karasek also worked on issues of the RTL show Die 5-Mio.-SKL-Show as a prominent sponsor of the candidates. Karasek himself said of his television work, which was often criticized, that he could not see anything dishonorable in his television appearances and that television had shaped him the most; he also stated that "a good punch line is better than a bad world". In 2004, the Frankfurter Allgemeine Zeitung called him a “journalistically iridescent turbo carp in the pond of gray pikes”.

In 1992 Karasek became honorary professor at the Theater Studies Institute at the University of Hamburg . He was also a supporter of the Center against Evictions .

In August 2015 he published a commercial for the Ikea catalog on YouTube in the form of an ironic book review.

He was married to Armgard Seegers for the second time and had four children, including the theater director and artistic director Daniel Karasek , the journalist and writer Manuel Karasek and the lawyer and writer Laura Karasek . His first wife, the Venezuelan music student Marvela Ines Mejia-Perez, had married Karasek in 1959 in Ebersberg. His younger brother was the writer Horst Karasek .

Karasek last lived in Hamburg-Harvestehude . At the age of 81, Karasek succumbed to biliary tract cancer . He was buried in the Ohlsdorf cemetery in Hamburg. 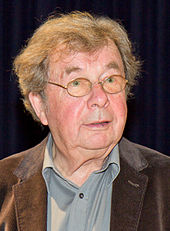