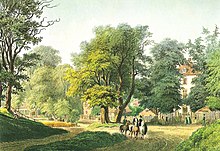 Harvestehude ( Low German : Harvstehuud ) is a district in the Eimsbüttel district of the Free and Hanseatic City of Hamburg .

Harvestehude is located on a ridge west of the Outer Alster . The district of Rotherbaum connects to the south and Eimsbüttel to the west . In the north, the Isebek Canal separates Harvestehude from the districts of Eppendorf and Hoheluft-West and -Est . Harvestehude includes the Grindel skyscrapers , most of Pöseldorf and the monastery land around the Innocentiapark . The Harvestehuder Weg runs along the eastern edge of the Alster foreland .

The name goes back to the former Harvestehude monastery , which was located northwest of today's oak park from 1293 to 1530. This is a transfer from the former location of the monastery, Herwardeshude am Pepermölenbek near the later Altona . In the literal translation the meaning would be stacking place at a ferry station (Hude) of the guardian of the army (Herward), however Herward was a regionally very common name in the 12th and 13th centuries, so that the obvious assumption that a certain Herward had the landing stage Founded in this place, the Pepermöhlenbek, can be found widely in literature. After moving to the Alster, the nuns called their monastery “In valle virginum” (Jungfrauenthal), but the popular name remained Die Frauen von Herwardeshude , from which the name Harvestehude evolved through a linguistic change and play on words . The Hamburg story and saga writer Otto Beneke explained that "some good Hamburgers, because there is a Winterhude across the street, probably call this place Herbstehude, and not that wrong, because 'Harvest' is the Low German word for autumn."

In 1530 the monastery was demolished and taken over into municipal administration. In 1860 a "Consortium Hamburger Bürger" bought the Harvestehude estate, developed the land through a regular road network and sold it on - mostly to real estate speculators, who sold villas and elegant apartment buildings on the parceled land and rented them to members of the Hamburg upper class and the Middle class. Harvestehude became one of the most elegant quarters in Hamburg. The name of the "Pöseldorf" belonging to Harvestehude is said to be derived from "pöseln", which means something like "gardening around without great economic success".

When the few houses in this garden area burned down in 1813, sheds and houses for coachmen, craftsmen, shopkeepers and servants were built here between Pöseldorfer Weg and Magdalenenstraße .

During the Second World War, the Grindelberg / Oberstrasse / Brahmsallee / Hallerstrasse area was severely damaged. The Grindel skyscrapers were built there between 1949 and 1956 . The British occupying forces commissioned the construction of the twelve high-rise buildings with eight to 14 storeys. Later they were administered by SAGA (Gemeinnützige Siedlungs-AG Hamburg).

When asylum seekers were to be housed in a former district military replacement office in 2015 , residents of the district sued. The Hamburg administrative court and the higher administrative court granted their urgent application and ordered a construction freeze. According to the development plan , which dates back to the 1950s, the building is located in a “specially protected residential area”, in which no social institution such as a refugee home is allowed. The city of Hamburg is therefore currently changing the development plan to enable the conversion.

Harvestehude is one of the richest districts in Hamburg. The average income per taxpayer is 111,088 euros annually (2013) and is therefore around three times as high as the overall Hamburg average.

For the election to the Hamburg citizenship and the district assembly , Harvestehude belongs to the constituency of Rotherbaum-Harvestehude-Eimsbüttel-Ost .

In the Harvestehude district, the NDR is represented at Rothenbaumchaussee 132 with the NDR radio headquarters and the Landesfunkhaus . The Rolf Liebermann Studio of the NDR is located in the immediate vicinity .

The Hamburger Camerata Chamber Orchestra and the Hamburg Boys' Choir St. Nikolai are based in the main church St. Nikolai am Klosterstern .

The Harvestehude Talks are an international and interdisciplinary academic lecture series, which is organized by the Corps Irminsul in its villa in Parkallee 62 at the Innocentiapark . The topics of around 125 speakers range from current developments in business and politics to military history to oenology and literature.

The district is characterized by numerous villas and stately homes, which were initially built in the historicist style from around 1870 . After 1900, Art Nouveau increasingly prevailed in Harvestehude . After the First World War, newer houses were mostly built in the few remaining vacant lots or, especially in the 1950s, on the rubble of the bombing of the Second World War.

The demolition of historic buildings reached its peak in Harvestehude in the 1970s. Most of the time, villas on large properties gave way to apartment complexes. Even today it happens again and again that historical buildings are torn down, for example the last time in summer 2007 a villa of the so-called “romantic historicism” from the 1850s on Mittelweg .

The Grindel skyscrapers are the first skyscrapers to be built for residential purposes from 1946 to the mid-1950s.

The Catholic Church of St. Elisabeth was built in 1926 together with the rectory on the corner of Hochallee and Oberstraße. Apart from the asymmetrical tower and the cladding with ashlar, the outside of the church building is hardly noticeable.

The neo-Gothic church of St. Johannis Harvestehude , built from 1880 to 1882, was originally located in the district and is now an active community there. However, the building is now located in the Rotherbaum district.

On the fourth floor of Alsterchaussee 5, Helmuth Gmelin opened the Theater im Zimmer in March 1948 . In May 1952, due to lack of space, the theater moved to the other side of the street (No. 30) into a 19th century villa. 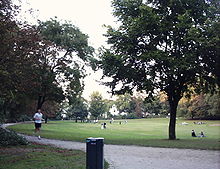 The Innocentiapark and the at the Nikolai Church situated Simon Bolivar Park . The park in the eastern part of Harvestehude directly on the Outer Alster, the so-called Alster foreland, was the site of the International Horticultural Exhibition ( IGA 53 for short ) in 1953 . The private land previously bordering the Outer Alster was acquired by the city for this purpose. This also includes the oak park .

The Isemarkt is a popular weekly market, which in parallel to the Isebek canal extending Isestraße under the local metro - viaduct is held. With a length of 970 meters, it should be Europe's longest open-air market. Market days are Tuesdays and Fridays from 8:30 a.m. to 2:00 p.m. If a public holiday falls on one of these days of the week, the market will be held the day before.

Harvestehude is considered to be the district in Hamburg with the third-highest-income citizens. In addition, the rents here are the highest in the city.

The underground lines U1 (with the stations Hallerstraße and Klosterstern ) and U3 (with the stations Hoheluftbrücke and Eppendorfer Baum ) cross the district. The Metro bus line 5 , the busiest in Europe, which leads Grindelberg through the district, which runs 15 on its southern border, Hallerstraße ; the line 109 crosses the Eastern part of Harvestehude, along the medium path .

The Eimsbüttel district office is located in one of the high-rise buildings in Grindel .

The district military replacement office in Hamburg was located in the Sophienterrasse  1 building , the building of which is now used as refugee accommodation.