The cuboctahedron (also cubooctahedron or cubo-octahedron ) is a polyhedron ( polyhedron ) with 14 sides (6 squares and 8 regular triangles ), 12 similar corners and 24 edges of equal length.

Due to its regularity, the cuboctahedron is one of the 13 Archimedean solids . Besides the icosidodecahedron , it is the only convex quasi-regular body. The Umkugelradius (distance between the corners to the center) is as in Antikuboktaeder equal to the edge length.

Its dual body is the rhombic dodecahedron .

Euler's polyhedron substitute is fulfilled with 12 corners, 14 surfaces and 24 edges :

With regard to its symmetrical properties, the cuboctahedron can be classified as a surface quasi-regular convex polyhedron : 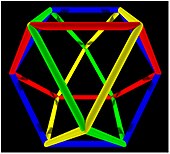 The four hexagons in the cuboctahedron

Special orthogonal projections exist for the cuboctahedron , in which primarily its corners, its edges, its triangles or its squares are recognizable.

The cuboctahedron can be cut along six contiguous edges. The resulting cut surface is a regular hexagon . A total of four such cuts are possible. The cut surfaces are not planes of symmetry of the cuboctahedron, but fixed planes of rotating mirror symmetries (see picture on the right).

Penetration of cube and octahedron

When creating a cuboctahedron by truncating a cube or octahedron, two intermediate forms are created: If both basic bodies are not truncated to the middle of the edge, but only partially truncated, the two Archimedean solids truncated hexahedron or truncated octahedron can be created.

The cuboctahedron can also be derived from another Platonic solid: If a tetrahedron is extended along its six edges, six quadrangles are created. Four triangles are formed at the previous corners of the tetrahedron, in addition to the four originally existing. If you continue this process until the rectangles are square, you get a cuboctahedron. Alternatively, this process can be thought of as blunting the edges of a tetrahedron.

The cuboctahedron is itself a starting point for the derivation of other polyhedra. All Platonic and Archimedean solids can be derived either from cuboctahedra, icosidodecahedron or tetratetrahedron (octahedron) by twisting (torsion). These three polyhedra are the possible penetrating bodies of the Platonic solids.

The large rhombic cuboctahedron , one of the Archimedean solids, is also known as the truncated cuboctahedron. In fact, it cannot be made from a cuboctahedron by blunting it, as the name suggests. That this is not the case can be seen from the type of surfaces that meet at the corners of the cuboctahedron: On the triangles, two edges starting from one corner form an angle of 60 °, but on the squares it is 90 °. By blunting each corner would become a rectangle instead of a square, because the hypotenuse in an isosceles triangle is longer at a 90 ° counter angle than at a 60 ° counter angle.

There are four different star shapes to the cuboctahedron. The first stellar body is identical to the penetration of the cube and octahedron.

If a cuboctahedron is cut along one of its hexagons, two triangular domes are created , the Johnson body J 3 . Alternatively, one can imagine the cuboctahedron composed of six square pyramids (J 1 ) and eight tetrahedra .

The cuboctahedron is said to have been known to Plato as the only one of the Archimedean solids.

Relation to the physical world

For Kubokateder open polyhedra on the Eureka

In Buckminster Fuller's so-called jitterbug transformation , the cuboctahedron with 24 edges is the most extensive state in which the six squares only exist virtually. By twisting an icosahedron , twelve of its 20 triangles and six of its 30 edges only exist virtually. After further twisting, the real edges of the real eight triangles collide in pairs, resulting in an octahedron . Twisting it again creates a tetrahedron with four edges collapsing. This can then be folded up into a flat triangle with eight edges coinciding. At the research exhibition Heureka in Zurich in 1991, this transformation was shown on the accessible Heureka polyhedron . During the change, the visitors inside were moved up and down synchronously on a lifting platform.

In MC Escher's Holzstich Sterne (1948) a small cuboctahedron appears in the lower left alongside numerous other polyhedra.